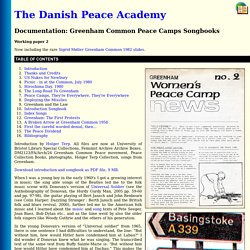 Introduction by Holger Terp. All files are now at University of Bristol Library Special Collections, Feminist Archive Archive Boxes. Hackney Flashers. The Hackney Flashers collective was set up in 1974 and created influential agitprop material in the 1970s and 1980s.[1] The women in the group, described themselves as broadly socialist-feminist and most of them engaged in the creative media as photographers, cartoonists and writers. 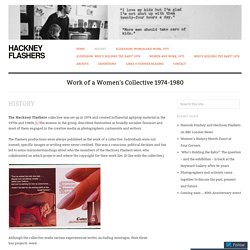 The Flashers productions were always published as the work of a collective. Individuals were not named; specific images or writing were never credited. Hackney Flashers make a comeback with childcare exhibition. Panel from Who’s Holding the Baby? 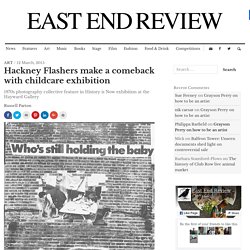 Copyright: Hackney Flashers A Hackney photography collective’s exhibition about childcare provision is on display at the Hayward Gallery, 36 years after it was first shown there. Who’s Holding the Baby? , by the Hackney Flashers, highlights the lack of affordable childcare and the impact it had on women’s lives in the 1970s. Now artist Hannah Starkey has reprised the exhibition for History is Now: 7 Artists Take On Britain, which opened at the Hayward Gallery last month. Cynthia Cockburn. I’m a feminist researcher and writer working at the intersection of gender studies and peace/conflict studies. 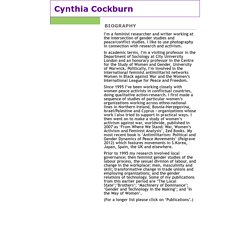 I like to use photography in connection with research and activism. Return to sender. So this was actually the entrance to the base and a load of traffic used the gates so there was always American vehicles going in and out, and look at it now and what you’re seeing. 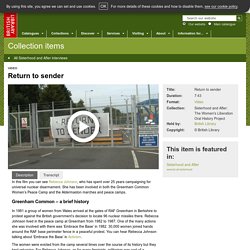 I love the way they’ve done this, they’ve made chalk pits that they’ve filled with water for the wild fowl and the birds. And around here’s where you sometimes see the Exmoor ponies. Carry Greenham Home. Sally Alexander discusses the night cleaners campaign. English Sally Alexander talks about how she got involved with the Night Cleaners Campaign in the early 1970s. 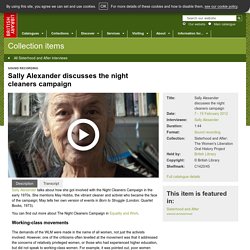 Nightcleaners part 1. Well, prepare the children for school, take them to school. 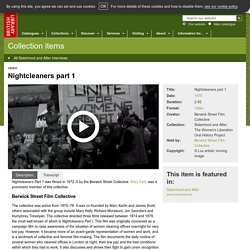 School is a bit far from home. School and back, get my tidying up done, washing up, and shopping and preparing for what’s to be made for dinner and about three o’clock I’m getting ready to go back to school to collect the children again. And after coming home getting dinner, feeding them, get them ready for bed and then I’m just about ready to get ready myself to come back to work. When do you get some sleep? Well, not very much sleep. So on average? If the baby goes to sleep, then I go to bed with them. Campaigns and protests of the Women's Liberation Movement.

From legal and illegal action, to quiet subversion and huge spectacle, feminists of the Women’s Liberation Movement employed various methods in order to make their point and demand social and legislative change. 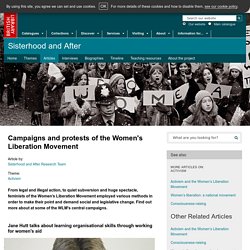 Find out more about at some of the WLM's central campaigns. Jane Hutt talks about learning organisational skills through working for women's aid From protest marches to strikes, smashing windows of pornography shops, flour-bombing beauty pageants, letter-writing campaigns and ‘die-ins’ in Downing Street, campaigns about issues central to women’s lives have taken many forms. Celebrating, exploring and debating the history of feminism. Sisterhood and After: An Oral History of the Women's Liberation Movement. Memories of a Protest. On an unusually balmy autumn day in 2013, a small group of women gathered outside the nuclear base at Aldermaston and began to sing. 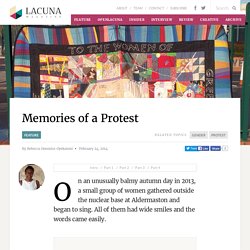 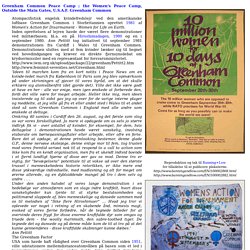 I: Information, 07/13/1983.Andersen, Inger Bjørn: Oprustningen skal brydes. I: Aktuelt, 07/02/1983.AP: Greenham Common kvinderne trodser dommers forbud.I: Information, 03/11/1983?. Women form peace camp to protest housing of cruise missiles at Greenham Common, 1981-1993. Greenham Commons outside Newbury, England was purchased in 1939 by the Newbury District Council for the public use of Newbury inhabitants, including the collection of firewood. In 1941 this area was requisitioned by the Air Ministry for an airfield, which was later decommissioned. Despite the decommissioning of the airfield, public ownership of the land was not fully restored. Then in 1979 NATO (North Atlantic Treaty Organization ) bought the land from the British government for the building of a military base that would house 96 Tomahawk Ground Launched Cruise Missiles (GLCMs). This action by NATO was part of a larger Cold War strategy by the U.S. to deploy small mobile nuclear missiles at air force bases throughout Europe in the event of hostile action by the Soviet Union.

Your Greenham: Glossary. The Women Who Took On The British Government's Nuclear Programme. In 1981 a group of women, angered by the decision to site cruise missiles (guided nuclear missiles) in the UK, organised a protest march from Cardiff, Wales to Greenham Common Air Base near Newbury in Berkshire. Here they set up what became known as the Greenham Common Women's Peace Camp. Between 1981 and 1983 the protesters attempted to disrupt construction work at the base. Greenham Common. Writing the web: Letters from the women's peace movement To the many who remember the women's peace camp, begun in 1981 at Greenham Common Royal Airforce Base, Berkshire, to protest the siting of short-range nuclear missiles in Britain, an article about its letters may seem perverse.

Greenham, as it became known, was extraordinary for its innovative direct action as a set of ramshackle encampments with none of the usual campaign infrastructure. It was fascinating for its open-air, women-only community, crossing social boundaries and political constituencies. Social Concern Support, Information & DVDs. The legend of Greenham Common women's peace camp. I never went to Greenham Common peace camp. I was a child during the main years - between 1981 and 1987. Search Our Collections for "greenham common" IWM’s collections cover all aspects of twentieth and twenty-first century conflict involving Britain, the Commonwealth and other former empire countries.

They were intended to record the 'toil and sacrifice' of every individual affected by war. Documents from the Greenham Common Women’s Peace Camp. December 5, 2014 – March 1, 2015Opening: December 5, 2014 Greenham Common Women’s Peace Camp was a 19-year anti-nuclear protest and encampment at the U.S. Military Base at Greenham Common, Berkshire County, England. This exhibition and event series, organized as a mother/daughter collaboration between Susan Jahoda and Emma Jahoda-Brown, assembles accounts of the comings and goings and daily lives of a diverse group of women at Greenham primarily over a nine year period. Photographs, film, artifacts and sound are brought together to reveal a complex view of a largely invisible history.

'I'll be wearing a T-shirt with 'No More Assassinations by RAF Drones' on it," says Helen John, matter-of-factly, when we arrange to meet by phone. She is 73. She has recently been in poor health. But a certain reputation still precedes her. Spare Rib: the top 10 reads from the archives. ‘It is a genuine surprise to discover its lightness’ When you look over back issues of Spare Rib, a number of things strike you about feminism and how it has changed; I would say that they are depressing and heartening in the ratio of roughly 9:1.

To start with the good news, it is salient to remember how much change has been wrought in terms of individual rights. There are cases in the news pages that make your jaw hang open: a woman fired from her job for wearing a badge that said “lesbians ignite”, judgments handed down that dripped with contempt, not just for women who were gay but for women who worked, women who unmeekly existed. We have come further than we think. Equal pay is not the only win; there have been less measurable but more important victories in the realm of how much casual misogyny you can say out loud while remaining in the broad category of civilised society. However, it also quickly becomes plain how much has not been achieved. Breaking out of the mould. Claire Daly interviews the first editor of pioneering feminist magazine Spare Rib Claire Daly, 31 January 2008. Juliette Rennes, l’œil sur les inégalités.