No Longer An Inspiration. When Nerds Collide. The assertion that we should “not be so defensive” is problematic because it denies that hackers have anything to feel defensive toward. 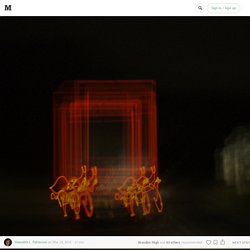 People get defensive when they feel like something important to them is in jeopardy, and our community is important to us because it’s where we find people who share our values. These range from the epistemic to the aesthetic — we are especially protective of the beauty of many the things we care about, often referred to as “elegance.” For those of us who experienced operative ostracism and public shaming, the protectiveness that runs through the entire stack has nigh-infinite fuel to draw from, and at times it doesn’t take much poking to turn a resource that many of us have transmuted into a source of productivity fuel into a tactical nuclear egghead. Diluting that pool is frightening because it takes us back to the diasporan times in our lives when we upheld those values alone or at most in tiny, isolated handfuls. 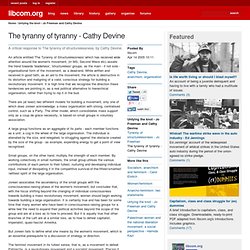 An article entitled 'The Tyranny of Structurelessness' which has received wide attention around the women's movement, (in MS, Second Wave etc) assails the trend towards 'leaderless', 'structureless' groups, as the main - if not sole - organisational form of the movement, as a dead-end. While written and received in good faith, as an aid to the movement, the article is destructive in its distortion and maligning of a valid, conscious strategy for building a revolutionary movement. It is high time that we recognise the direction these tendencies are pointing in, as a real political alternative to hierarchical organisation, rather than trying to nip it in the bud. There are (at least) two different models for building a movement, only one of which does Joreen acknowledge: a mass organisation with strong, centralised control, such as a Party. 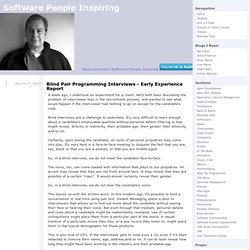 We'd both been discussing the problem of interviewer bias in the recruitment process, and wanted to see what would happen if the interviewer had nothing to go on except for the candidate's code. The Making of Myths, by Laurent Bossavit. A while ago I wrote a short and quirky book, "The Leprechauns of Software Engineering. 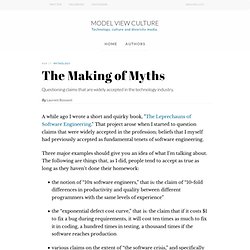 " That project arose when I started to question claims that were widely accepted in the profession; beliefs that I myself had previously accepted as fundamental tenets of software engineering. Three major examples should give you an idea of what I’m talking about. The following are things that, as I did, people tend to accept as true as long as they haven’t done their homework: The cover of Bossavit's book, "The Leprechauns of Software Engineering" After hearing these repeated over and over again, I eventually started doubting. No two studies ever quite agreed on how to define, let alone measure, developer productivity. The Gray Zone. There is currently at least a couple of discussions on Hacker News about sexism in IT. 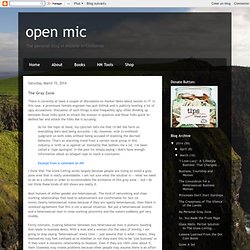 In this case, a prominent female engineer has quit GitHub and is publicly leveling a lot of ugly accusations. Discussion of such things is also frequently ugly, often dividing up between those folks quick to attack the woman in question and those folks quick to defend her and attack the folks she is accusing. As for the topic at hand, my cynicism tells me that I'd bet the farm on everything she's said being accurate. I do, however, wish to withhold judgment on both sides without being accused of enabling the decried behavior. That's an alarming trend from a certain vocal group in this industry, a "with us or against us" mentality that bothers me a lot.

I think that The Glass Ceiling exists largely because people are trying to avoid a gray zone area that is really unavoidable. Most humans of either gender are heterosexual. Most professional power and money is in the hands of men. Okay, Feminism, It’s Time We Had a Talk About Empathy — Dear (blank), Growing up with autism is a never-ending series of lessons in how people without autism expect the rest of the world to relate to them. 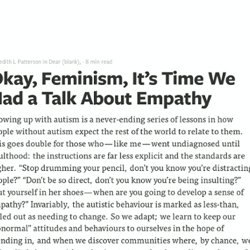 This goes double for those who — like me — went undiagnosed until adulthood: the instructions are far less explicit and the standards are higher. “Stop drumming your pencil, don’t you know you’re distracting people?” “Don’t be so direct, don’t you know you’re being insulting?” “Put yourself in her shoes — when are you going to develop a sense of empathy?” Girls and Software. December 2013's EOF, titled "Mars Needs Women", visited an interesting fact: that the male/female ratio among Linux Journal readers, and Linux kernel developers, is so lopsided (male high, female low) that graphing it would produce a near-vertical line. 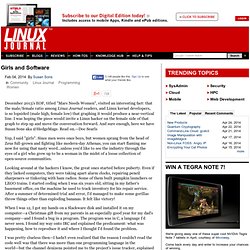 I was hoping the piece would invite a Linux hacker on the female side of that graph to step up and move the conversation forward. And sure enough, here we have Susan Sons aka @HedgeMage. Read on. —Doc Searls Yep, I said "girls".