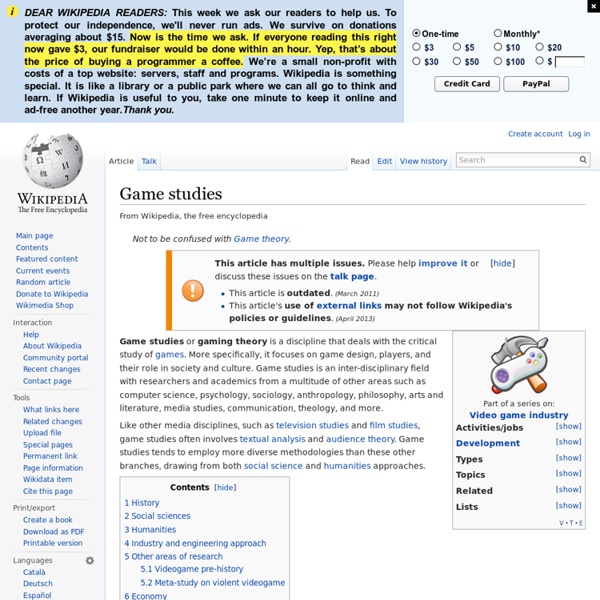 Game studies or gaming theory is a discipline that deals with the critical study of games. More specifically, it focuses on game design, players, and their role in society and culture. Game studies is an inter-disciplinary field with researchers and academics from a multitude of other areas such as computer science, psychology, sociology, anthropology, philosophy, arts and literature, media studies, communication, theology, and more. Like other media disciplines, such as television studies and film studies, game studies often involves textual analysis and audience theory. History[edit] Prior to the late-twentieth century, the academic study of games was rare and limited to fields such as history and anthropology. These influences may be characterized broadly in three ways:[3] the social science approach, the humanities approach, and the industry and engineering approach. The youth of the field of game studies is also another reason for blurred boundaries between approaches. [edit]

Humans not that much better than fellow primates at game theory Game theory uses deceptively simple challenges to provide insights into human decision making and cooperation. Many of the challenges force players to choose between (for example) taking a small but guaranteed payoff or a big payoff that will be lost unless another individual cooperates. The games themselves are often simple enough that they can be adapted to work with other primates so that researchers can determine which human behaviors are shared with our closer relatives. But that adaptation can significantly change the appearance of the game, raising questions about whether the results are actually comparable. The game they used is technically called the assurance game, but is also known as the "stag hunt" by researchers. To even things out as much as possible, the authors replaced the rabbit and stag with different colored poker chips. In a lot of ways, this does help to even out matters. Overall, humans did better than chimps, and chimps than capuchins.

Shigeru Miyamoto Shigeru Miyamoto (宮本 茂, Miyamoto Shigeru?, born November 16, 1952[1]) is a Japanese video game designer and producer. He is best known as the creator of some of the best-selling, most critically acclaimed, most enduring, and most influential games and franchises of all time. Miyamoto was born and raised in Kyoto Prefecture; the natural surroundings of Kyoto inspired much of Miyamoto's later work. Early life Miyamoto was born in the Japanese town of Sonobe, a rural town northwest of Kyoto,[3] on November 16, 1952. Miyamoto graduated from Kanazawa Municipal College of Industrial Arts with a degree in industrial design[3] but no job lined up. Western genre television shows had a major influence on Miyamoto.[8] Career 1977–1984: Arcade beginnings; Donkey Kong Nintendo, a relatively small Japanese company, had traditionally sold playing cards and other novelties, although it had started to branch out into toys and games in the mid 1960s. 1990–2000: SNES and N64; Super Mario 64 and Ocarina of Time

Learning science through gaming This month, thousands of middle-school students are going online to play an interactive video game. That might not sound surprising, by itself. But in this case, the game is a special science-mystery project, “Vanished,” created by MIT researchers on behalf of the Smithsonian Institution, as a novel experiment in alternative science education. “Vanished” is a two-month-long game, which debuted the week of April 4 and stems from an initial scenario revealed in recent video messages on the site. The premise is that people living in the future have contacted us in the present, to answer a question: What event occurred between our time and theirs that led to the loss of civilization’s historical records? “Too often, kids are convinced science is no fun and not for them,” says Scot Osterweil, research director of MIT’s Education Arcade, a group jointly housed in MIT’s Comparative Media Studies program and the Scheller Teacher Education Program, which created the game. Informal learning

Why gamers are a great fit at the gym "For the first 26 years of my life, I had no idea what exercise was," Fitocracy user Michael Perry says. Fitocracy uses video game techniques to encourage exercise"Glued to Games" authors say motivation is similar in fitness, games Community around online games, or fitness, satisfies a psychological need (CNN) -- They've been trained to focus for weeks at a time on a single goal. They know how to clearly identify obstacles and form step-by-step plans to overcome them. They're obsessed with improving specific skills but judge success only by overall progress made in the world they've decided to conquer -- as realistic or fantastical as it may be. It's precisely these traits that make video-gamers great bodybuilders. Take a moment to laugh, if you must. Brian Wang and Dick Talens were the stereotypical video-gamers in high school. "I literally would wake up and play all day, eating intermittently," Talens said. Dick Talens weighed 230 pounds in high school before becoming a body builder. Why?

Fun Fun Fun I’ve been known to criticize nostalgic gamers who believe retro titles were superior to modern offerings, despite most old games being rubbish, but I almost can’t fault them for it. I look at the gamers of today and I often wonder if we’ve forgotten how to have fun, and whether retro gamers don their rose-tinted specs not because the games were better back then, but because they were better gamers back then. There’s an air of dry misery that surrounds gamers these days, at least online, and it seems that when I converse with others of my ilk, the prime concerns get less about gaming, and more about the periphery garbage surrounding it — various publisher shenanigans, controversies concerning homosexuality as represented in the medium, whether or not we’re driving the industry forward artistically. Just take a look at Portal 2. Most gamers and critics agree, it’s one of the best games to be released this generation. I’m not innocent of this. I love videogames so much.

Serious Games Games have been on my mind more than usual lately, both because of Jane McGonigal's new book Reality is Broken, and Bruce Sterling's review of The Art of Game Design. Games are fascinating because players perform pointless tasks that under any other circumstances would be considered work, and master arcane skills, all in the name of fun. If the energy put into playing games could be harnessed to external reality, whether economic or political, it'd be like building a social perpetual motion machine. Another side of games is socialization. The last area of games that we're interested in, and on which relatively little research has been done, is the use of games to help collective decision-making.

Exposure to letters A or F can affect test performance Seeing the letter A before an exam can improve a student's exam result while exposure to the letter F may make a student more likely to fail. The finding is published in the British Journal of Educational Psychology in March 2010. The study, carried out by Dr Keith Ciani and Dr Ken Sheldon at the University of Missouri, USA, investigated whether exposing students to the letters A or F before a test affected how they performed. A total of 131 students took part in three separate experiments. Each participant's analogy tests were scored and compared between the groups. In the second study, the experiment was repeated with 32 students, but as well as Test Bank ID: A' and 'Test Bank ID: F' groups, some of the students were given 'Test Bank ID: J' -- a letter without performance meaning. Dr Keith Ciani said: "These findings suggest that exposure to letters A and F, even without any explicit reference to success or failure, significantly affected the students' performance on the tests.

Fitocracy Brings Games And Social To Your Workouts (Invites Within) You may not have heard of them quite yet, but a startup called Fitocracy is pretty hot right now. Six months into its private beta and Fitocracy has already gathered 18K users and has 8K more on the wait list. (And we have 1,200 free beta invites here, so click away!) But, ‘why is Fitocracy so hot right now?’ you ask in your best Zoolander impression. Well, for starters, Fitocracy brings role playing game mechanics and a social aspect to online fitness — and it’s got a great name. But it wasn’t always that way. So, the founders decided to approach fitness exactly as they did their favorite RPGs: Give people a reason to get excited about, or addicted to, fitness by bringing the gaming reward system to workout routines. The platform awards you with points, the ability to level-up, badges and more to get you dedicated to your fitness and treating it like a game, rather than some arduous task you’d rather put off until never.

Stop Procrastinating...Now - Amy Gallo - Best Practices by Amy Gallo | 9:25 AM October 11, 2011 It seems that no one is immune to the tendency to procrastinate. When someone asked Ernest Hemingway how to write a novel, his response was “First you defrost the refrigerator.” But putting off tasks takes a big hit on our productivity, and psyche. Procrastination is not inevitable. Figuring out why you postpone work and then taking concrete steps to prevent it will help you get more done and feel good about yourself. What the Experts Say According to Ned Hallowell, a psychiatrist and the author of 12 books, including Driven to Distraction, delaying work is often a symptom of how busy you are. 1. Something you don’t like to do. Once you’ve identified why you’ve put something off, you can break the cycle and prevent future bouts of procrastination. 2. Setting deadlines also makes sure the project doesn’t get buried. 3. 4. 5. Principles to Remember Do: Don’t: Lisa’s anxiety wasn’t helping her and she needed to get the project going.

Let’s Get Ready Offers Help for College Admissions Since second grade, she has taken advantage of a voluntary integration program here, leaving her home in one of the city’s poorer sections before 6:30 a.m. and riding a bus over an hour to Newton, a well-to-do suburb with top-quality schools. Some nights, she has so many activities that she does not get home until 10 p.m.; often she’s up past midnight studying. “Nathaly gets so mad if she doesn’t make the honor roll,” says Stephanie Serrata, a classmate. Last Wednesday, Nathaly did it again, with 5 A’s and 2 B’s for the first marking period. She has excelled at Newton North High, a school with enormous resources, in part by figuring out whom to ask for help. When she did not get along with her English teacher, she went to her guidance counselor, Michele Kennedy, for support, and found Lyn Montague, a teacher happy to give her after-school help. “I wish I had more Nathalys,” Ms. They are also required to write an essay explaining why they want to participate in Let’s Get Ready.