Applauding great film, challenging feminine oppression. On Women’s Rights: Yeah, Yeah, Blah, Blah, Blah. Whatever. A Message To Women From A Man: You Are Not “Crazy” Guess what? Turns out, Men Are More Sensitive than Women, Part 1. You don’t believe me?

I have science backing me up. The Huffington Post’s article by Peggy Drexler explains how scientists discovered that men are hardwired to be more emotionally sensitive than women. University of Pennsylvania neuroscientist Dr. Ruben Gur says that the same way men and women have different bodies, they have different brains — with eons of evolution creating distinct wiring. It goes well beyond the formative impact of testosterone and estrogen. The article goes on to say: … boys reacted to the crying with a higher release of stress hormones. Men avoid confrontations with emotional women I know I am not alone in saying that I have avoided confrontations with a partner when she is upset. At the same time I feel the love and concern for my partner. Does this feel familiar? Understand the biology before condemning the man or woman Both the man and the woman are in an autonomic nervous system reaction – a fight-or-flight reaction that might be linked to a past event(s).

Pubic hair is back. Your ugly vagina is normal and gorgeous. What, you don’t like your bits and twinkles? Have you seen the documentary film, The Perfect Vagina ? It’s certainly not for the faint of heart. I sat through the entire thing feeling squeamish, legs crossed tight, one hand over my eyes and a little curious about the look of my own undercarriage. Why all the tension and peculiar interest? The film is about vaginal cosmetic surgery, and according to this film, it’s growing in popularity. Photo credit: Wikipedia. The Imperfect Perfect Penis. Not too long ago I wrote an article called ‘Your Ugly Vagina Is Normal & Gorgeous’ so I only thought it fair to explore some of the taboos of male genitalia—specifically the ‘size’ of penises. 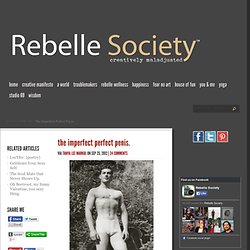 I was inspired to write this piece based on a BBC documentary called ‘My Penis and Everyone Else’s’. The size of one’s member isn’t necessarily a coffee table discussion, so how do we gauge how ‘big’ the problem is if men don’t want to talk about it? Well, I started to do some research and my first question was—what is the average size of a penis? The Penis Erectus Lengthus. According to Dr. With further investigation, I have discovered that in numerous other medical documents and research findings that the ‘range’ is more like 5 to 5.7 inches—at full attention (12.8 to 14 cm)—to which 90% of men fall into. Please note, these figures are for varying ethnicities and adult ages.

So, who’s to blame for the miscalculations of membership sizes? No, it’s not Ron Jeremy. What do you think? 1. Read more: Can Two New Apps Help Women Avoid Sexual Assault? - Technology. Back in July, Health and Human Services Secretary Kathleen Sebelius announced the "Apps Against Abuse" challenge.

Because women between the ages of 16 and 24 are the most likely to be raped or sexually assaulted, Sebelius and her staff wanted to support the development of something to help those women via the handheld devices they use every day. Apps Against Abuse was a call to developers to come up with novel uses for mobile technology in the fight against sexual abuse. Yesterday, Sebelius announced the winning apps.

Circle of Six The Circle of Six app works by allowing women to quickly access their six closest contacts in uncomfortable or unsafe situations. OnWatch Like Circle of Six, OnWatch allows users to reach out to emergency contacts quickly and easily, but with a few added bells and whistles. Both apps, which will be available in early 2012, are customizable to fit the needs of the user. Photo via (cc) Flickr user Lee J Haywood.