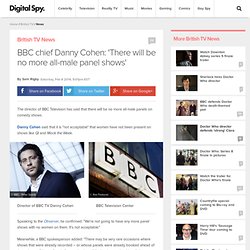 Danny Cohen said that it is "not acceptable" that women have not been present on shows like QI and Mock the Week. Director of BBC TV Danny Cohen Speaking to the Observer, he confirmed: "We're not going to have any more panel shows with no women on them. It's not acceptable. " Meanwhile, a BBC spokesperson added: "There may be very rare occasions where shows that were already recorded – or whose panels were already booked ahead of the order – still have all-male lineups, but hopefully the change should really become apparent. " Woman in catcall viral video receives rape threats. You've probably seen the new Hollaback PSA video, which documents the obscene amount of street harassment that one woman received while walking through New York. 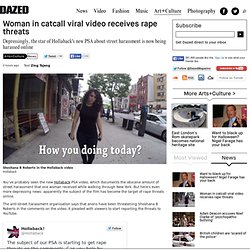 But here's even more depressing news: apparently the subject of the film has become the target of rape threats online. The anti-street harassment organisation says that anons have been threatening Shoshana B Roberts in the comments on the video. It pleaded with viewers to start reporting the threats to YouTube. 10 Hours of Walking in NYC as a Woman has already been viewed over 1.17 million times since it was uploaded on Tuesday. U_MAYER_F12.

’Tis Pity She’s a Whore review – naked passion illuminated by candlelight. After a spate of concept-driven classic revivals, this production of John Ford’s 1633 incest drama falls like manna from heaven. 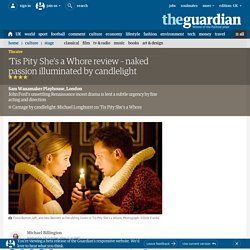 Even in this intimate, candlelit space you can appreciate that the play has been visibly directed by Michael Longhurst: at the same time, everything is driven by a desire to illuminate Ford’s text rather than exhibit the director’s ego. Longhurst’s prime achievement is to preserve a balance between the incestuous siblings and the hypocritical society that surrounds them: he neither sentimentalises the lovers nor overdoes the Italianate corruption. He also makes a crucial distinction between the disingenuous Giovanni, who falsely claims the church has sanctioned sex with his sister, and his spirited sibling, Annabella, who simply follows the promptings of her heart.

With comparable subtlety, Longhurst shows that not all clerics are cut from the same cloth. La Roux - Sexotheque Lyrics. 'Maleficent' Isn't Angelina Jolie's First Feminist Film But It Is Her Most Successful. Despite the year being 2014, women making up half of all movie-goers, and a whole bunch of statistics saying otherwise, a scary number of people still believe that female-led movies can’t do well at the box office. 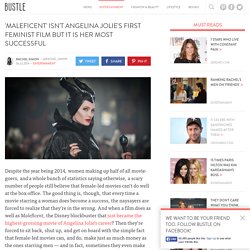 The good thing is, though, that every time a movie starring a woman does become a success, the naysayers are forced to realize that they’re in the wrong. And when a film does as well as Maleficent, the Disney blockbuster that just became the highest-grossing movie of Angelina Jolie’s career? Then they’re forced to sit back, shut up, and get on board with the simple fact that female-led movies can, and do, make just as much money as the ones starring men — and in fact, sometimes they even make more. What makes the success of movies like Maleficent even better is that in addition to proving that women can lead movies, they also highlight the female stars who have made strides for feminism, film after film. Salt (2010) Changeling (2008) A Mighty Heart (2007) Mr. and Mrs. About. Welcome to the everyday sexism project. 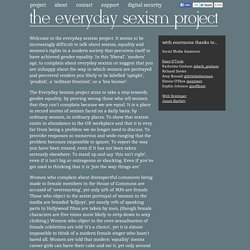 It seems to be increasingly difficult to talk about sexism, equality and women’s rights in a modern society that perceives itself to have achieved gender equality. In this ‘liberal’, ‘modern’ age, to complain about everyday sexism or suggest that you are unhappy about the way in which women are portrayed and perceived renders you likely to be labelled ‘uptight’, ‘prudish’, a ‘militant feminist’, or a ‘bra burner’. The Everyday Sexism project aims to take a step towards gender equality, by proving wrong those who tell women that they can’t complain because we are equal. It is a place to record stories of sexism faced on a daily basis, by ordinary women, in ordinary places. To show that sexism exists in abundance in the UK workplace and that it is very far from being a problem we no longer need to discuss. So please, send me your stories. GoldieBlox & Rube Goldberg "Princess Machine"

This feminist t-shirt isn't actually made in a sweatshop. The Fawcett Society has said that the charity's controversial "This is what a feminist looks like" t-shirts are made in entirely ethically, refuting claims by the Mail on Sunday that the garment was manufactured in "sweatshop conditions". 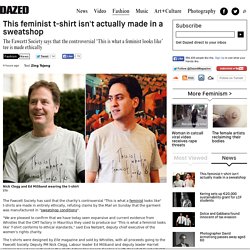 "We are pleased to confirm that we have today seen expansive and current evidence from Whistles that the CMT factory in Mauritius they used to produce our ‘This is what a feminist looks like’ T-shirt conforms to ethical standards," said Eva Neitzert, deputy chief executive of the women's rights charity. The t-shirts were designed by Elle magazine and sold by Whistles, with all proceeds going to the Fawcett Society. Deputy PM Nick Clegg, Labour leader Ed Miliband and deputy leader Harriet Harman have been pictured in the shirt.