Archive - Second Wave Feminism - The campaign for women's rights in the 1970s. Jemima Kirke: Where are the Women? – Unlock Art. Empowering Femininity. Early on in my first book Whipping Girl, while discussing the tendency within some strands of feminism to discourage women from engaging in acts and pursuits that are considered feminine, I argued that “We should instead learn to empower femininity itself.” 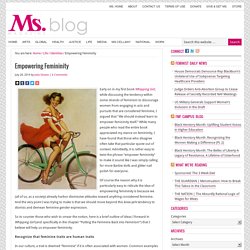 While many people who read the entire book appreciated my stance on femininity, I have found that those who disagree often take that particular quote out of context. Admittedly, it is rather easy to twist the phrase “empower femininity” to make it sound like I was simply calling for more Barbie dolls and glitter nail polish for everyone. Of course the reason why it is particularly easy to ridicule the idea of empowering femininity is because we (all of us, as a society) already harbor dismissive attitudes toward anything considered feminine. And the very point I was trying to make is that we should move beyond this knee-jerk tendency to dismiss and demean feminine gender expression. Recognize that feminine traits are human traits. Finally, A Feminism 101 Blog. Before talking about the male gaze, it is first important to introduce its parent concept: the gaze. 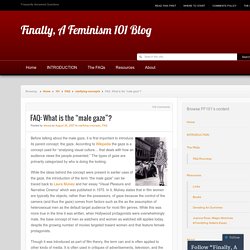 According to Wikipedia the gaze is a concept used for “analysing visual culture… that deals with how an audience views the people presented.” The types of gaze are primarily categorized by who is doing the looking. While the ideas behind the concept were present in earlier uses of the gaze, the introduction of the term “the male gaze” can be traced back to Laura Mulvey and her essay “Visual Pleasure and Narrative Cinema” which was published in 1975. In it, Mulvey states that in film women are typically the objects, rather than the possessors, of gaze because the control of the camera (and thus the gaze) comes from factors such as the as the assumption of heterosexual men as the default target audience for most film genres. Though it was introduced as part of film theory, the term can and is often applied to other kinds of media.

Related Reading: I’m tired of being kind to creepy men in order to stay safe. My Mum once told me her biggest regret was that she’d brought her daughters up to be so polite. 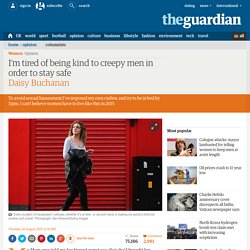 It happened after one of my little sisters came home in tears. A “friendly” man at the train station had started making comments about her legs and asking if she had a boyfriend. The Feminist Future: Griselda Pollock. Most readers are women, yet female writers still dominated by men. A Young Woman Reading, Alexandre-Évariste Fragonard. 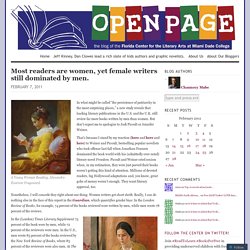 In what might be called “the persistence of patriarchy in the most surprising places,” a new study reveals that leading literary publications in the U.S. and the U.K. still review far more books written by men than women. But don’t expect me to apologize to Jodi Picoult or Jennifer Weiner. That’s because I stand by my reaction (here and here and here) to Weiner and Picoult, bestselling popular novelists who took offense last fall when Jonathan Franzen dominated the book world with his (admittedly over-rated) literary novel Freedom. Picoult and Weiner cried sexism when, in my estimation, they were just peeved their books weren’t getting this kind of attention. Millions of devoted readers, big Hollywood adaptations and, you know, great gobs of money weren’t enough.

Nonetheless, I will concede they right about one thing: Women writers get short shrift. Woman Reading, Alexander Deineka. Woman Reading Mujer Leyendo, Fernando Botero. Spare me the selfie school of feminism: women always give up too much information. This is all about me, because, the thing is, I’m actually OK. 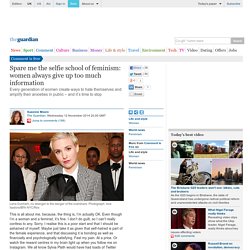 Even though I’m a woman and a feminist, it’s fine. I don’t do guilt, so I can’t really confess to any. Sorry, I realise this is a poor start and that I should be ashamed of myself. Maybe just take it as given that self-hatred is part of the female experience, and that discussing it is bonding as well as financially and psychologically satisfying. Feel my pain. We Need to Recentre Trans Debate. The Dispute Between Radical Feminism and Transgenderism. On May 24th, a few dozen people gathered in a conference room at the Central Library, a century-old Georgian Revival building in downtown Portland, Oregon, for an event called Radfems Respond. 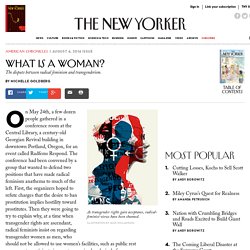 The conference had been convened by a group that wanted to defend two positions that have made radical feminism anathema to much of the left. First, the organizers hoped to refute charges that the desire to ban prostitution implies hostility toward prostitutes. Then they were going to try to explain why, at a time when transgender rights are ascendant, radical feminists insist on regarding transgender women as men, who should not be allowed to use women’s facilities, such as public rest rooms, or to participate in events organized exclusively for women. The dispute began more than forty years ago, at the height of the second-wave feminist movement.

In this view, gender is less an identity than a caste position.