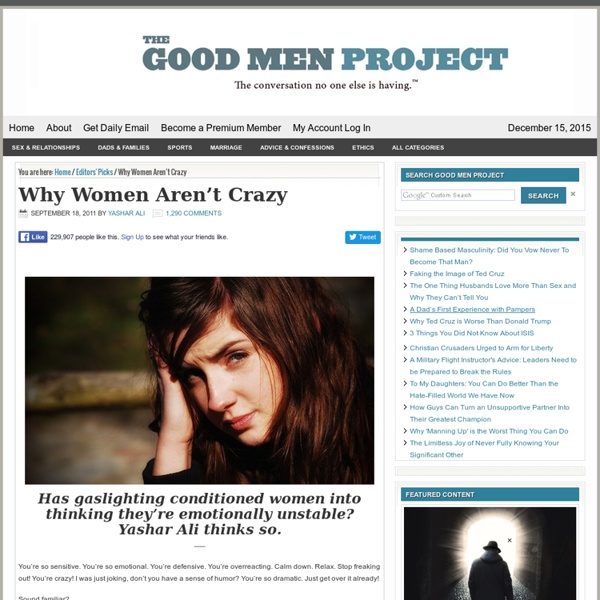 Harassment, male privilege, and jokes that women just don’t get A familiar theme comes up frequently in internet discussions: Women who complain about online harassment are just missing the joke. As an initial descriptive matter, it’s pretty clear that women and men are often treated differently in online discussion. (Quick, name a case in which someone was harassed online. A few months ago, John Scalzi noted that: In my experience, talking to women bloggers and writers, they are quite likely to get abusive comments and e-mail, and receive more of it not only than what I get personally (which isn’t difficult) but more than what men bloggers and writers typically get. That bears repeating: The Internet is not the same experience for men as it is for women. Why is the internet a different place for men than for women? Men build discursive spaces and discursive norms based on their own experience. Women as a group have a vastly different experience with the idea of sexual violence. The same goes for statements about violence in general.

Hot Nerd Girl | nerd girls of the world unite In this week’s podcast, Darcy and I discuss the exciting finale of AMC’s The Walking Dead including a very lively debate about how the series should eventually end. Disclaimer: there’s a bit of cursing in this podcast towards the end when we talk about Rick’s final line of the show and also some boob talk, so you’ve been warned! Disclaimer #2: Darcy lives out on a farm and it was pouring rain when we were recording the podcast so there is one brief section in which I sound kind of like a robot because the internet connection was compromised. So have fun with that Let us know what you thought of the season finale of The Walking Dead in the comments below! Darcy and I just had to talk about what’s been going on the last couple of weeks on AMC’s The Walking Dead leading up to this Sunday’s season finale. Hope you enjoy listening to it as much as we enjoyed talking about it! Listen to the podcast here:

What the LDS church tells young women I grew up as an only child in a single parent family. It wasn't easy. But one thing I remember clearly--very clearly--is learning there were no restrictions on what I could do. What I could achieve. I did yard work and housework. In baseball, I was always a first pick. I had NO gender related role given to or demanded of me. As the right's political discussion becomes more painfully and unequivocally anti-woman every day, simultaneous with the notion that someone somewhere may be waging a war on religion, I wanted to change course and provide the proof that at least one religion is waging a war against women and has been for 150+ years. And it may help to explain why he is dangerous to women of any age. This material is being taught today. And as a woman watching this disgusting display of patriarchal rivalry over my reproductive system, I am reminded that now more than ever, we women and the men and boys that respect and love us need to battle this with a full-throated response.

stuff i saw this week..... this was not my breakfast but i wish it was.this looks DELISH. this laundry room makes me happy.the yellow is perfection.................................................... blowing my mind!!!in every way. i LOVE this shark watermelon. i think maybe this would be a rad way to start the summer....carving a shark head. YES! does this make you smile??? i can't believe that this is her real hair.....but i love it.i wonder what her profession is that allows this hair?? i forgot to tell you that as of spring break this year my kids have been doingall of their own laundry. i am so happy about this.they are in charge of it.if they want clean socks then they need to think about it....if they need their uniform clean....they had better make sure it's clean.LIFE SKILLS baby.they also benefit because we don't have to have family folding nights.if you wash your own clothes then you only have to fold your own clothes! "please can you help me mom?" "ok....i will be right there" i am glad i went. happy friday!

Sawdust and Embryos Success is a Skill If you're new here and you like what you see, then you may want to subscribe to my newsletter for special perks and updates. Thanks for visiting! “You know, like nunchuk skills, bow hunting skills, computer hacking skills. Girls only want boyfriends who have great skills.” Napoleon Dynamite “Just one idea can change your life.” “To master one thing is to master 10,000.” success [səkˈsɛs] (noun) – an event that accomplishes its intended purpose; the attainment of a favorable or desired outcome; the achievement of something desired, planned, or attempted; an action that immediately and involuntarily results in “the pump.” Photo Credit: We tend to equate success with the attainment of wealth and fame, but success isn’t merely reserved for that tiny sliver of potential. Today, I successfully got out of bed. You see, there’s no such thing as remaining stagnant. The Success Formula 1) a goal 2) a plan of action to achieve that goal 3) action P.S.

Riusuke Fukahori Paints Three-Dimensional Goldfish Embedded in Layers of Resin First: watch the video. Japanese artist Riusuke Fukahori paints three-dimensional goldfish using a complex process of poured resin. The fish are painted meticulously, layer by layer, the sandwiched slices revealing slightly more about each creature, similar to the function of a 3D printer. I really enjoy the rich depth of the pieces and the optical illusion aspect, it’s such an odd process that results in something that’s both a painting and sculptural. Wonderful. Projects — Conceptual Devices Orto Perpetuo is a year-round indoor edible garden that grows fruit and leaf vegetables. Orto Perpetuo combines ELIOOO (an hydroponic system made out of IKEA boxes designed by Antonio Scarponi) and the LED lamp Quadra (14W) produced by BULBO. Its modular characteristic allows to scale the size of the growing area. A module (65×95 cm) can [...] After the Elephant and the Giraffe the TANTOOO tradition keeps going: a LION just got out from the Zoo of my mind. This will be presented in Milano during the Design Week (8th-13th April, 2014) at Kidsroomzoom in Via Giuseppe Revere 6 20123 Milano, Italy. TANTOOO is the result the encounter between two little girls. The 20th Century left vast, abandoned, spaces in our cities. Time to conceptual shopping in DADA Zurich. Passing by Rimini and its riviera, observing the city and walking the beaches, can’t help but think of a grand costume ball. By following the instructions in this book, you will become the manufacturer of an idea. Yeeeeeeeehh!!!

Rich Reads: Historical Fiction Fit For A Queen Harriet Russell I have always loved a great story set in the past. Give me a high-powered historical plot, and I will keep turning those pages until my eyes cross. But if I'm really going to make a meal out of a book, to be nourished and satisfied by it, I crave something more — not just the general excitement of an ancient tale, but a specific time so perfectly evoked that I breathe the straw dust and smell the rough bread baking. The books that follow have it all. Homemade "Vicks Vapor shower disks" Have you seen the commercials for the Vicks Vapor shower disk thingies? You put one of these disks in your shower, and voila thanks to the vapors in it, you're magically healed, your cold is gone, and your face is shockingly free of snot. I always used to watch the "Noxema girl" splashing water on her face and wondered how she was able to wash her face without being completely overrun with boogers. I'm the only one? Yes? Regardless, Vicks makes these things and I'm sure they're super expensive for something that is just going to wash down your drain. You know where I'm going with this, right? Yep. I made them myself. The idea started a few weeks ago when my sweet little nephew Parker came down with Croup for like the 1,438th time. And they couldn't be any simpler. Sarah's Homemade Vicks Shower Disk Thingies -Baking soda -Water -Essential oils: eucalyptus, rosemary, and lavender. 1) Add baking soda to a mixing bowl. 2) Slowly add water until you've made a thick paste.

Modern Parents Messy Kids Before & After: "Audree" Gets a Makeover The Fancy Farmgirl Audree was always pretty. She definitely has good bones, but over time Audree's looks had, well, faded a bit. It happens. Tiffany was given the 52-year old trailer, "Audree" as a gift from her husband, and she soon became "obsessed" with fixing her up. Tiffany mixed vintage flea market and yard sale finds with bargains from IKEA and Marshall's. The eating area features a banquette covered in white, faux-ostrich vinyl and handmade curtains. • Read More: Read all about Audree's makeover, along with some great detail shots, at The Fancy Farmgirl . (Images: The Fancy Farmgirl )

A bit of green :: arts :: crafts Hello everyone! This is a quick post to share a (not so quick) DIY I did a while ago for Alex, a snow globe made from an empty light bulb. I have a soft heart for snow globes, among chocolate, cats and various other things, and I figured it would be awesome if I managed to make one myself! I should tell you from the start, however, that this is one of the most tricky crafts I have done so far and also the only one that failed after one year of use: the tricky part it to perfectly seal the light bulb, which, apparently, I wasn’t able to do… but perhaps you will! Posted by Kynthia on December 1st 2013 in arts :: crafts This post has been sitting on our WordPress shelves for quite a while! Don’t get intimidated from the length of the instructions, it’s really easy once you’ve read it. Posted by Kynthia on November 24th 2012 in arts :: crafts Hi there! Lastly, since I love the tradition of filling a sock with presents for Christmas, I thought it’s a pity to have only one sock to fill!