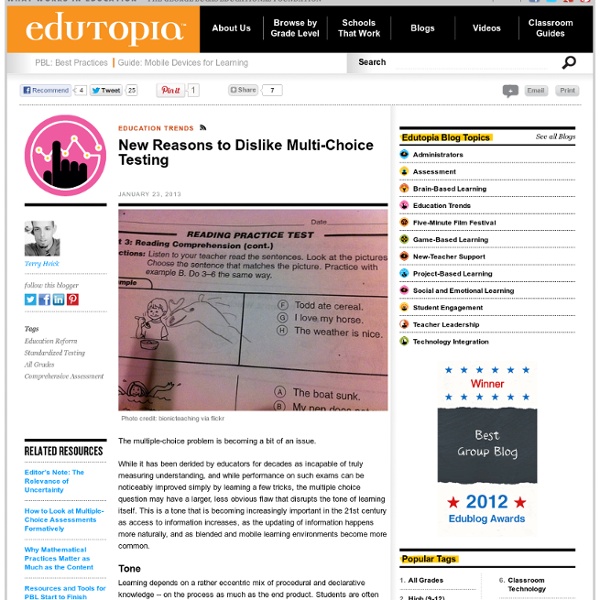 The multiple-choice problem is becoming a bit of an issue. While it has been derided by educators for decades as incapable of truly measuring understanding, and while performance on such exams can be noticeably improved simply by learning a few tricks, the multiple choice question may have a larger, less obvious flaw that disrupts the tone of learning itself. This is a tone that is becoming increasingly important in the 21st century as access to information increases, as the updating of information happens more naturally, and as blended and mobile learning environments become more common. Tone Learning depends on a rather eccentric mix of procedural and declarative knowledge -- on the process as much as the end product. The process of mastering mathematics, for example, is served as much by a consistent process of practice as it is the practice itself. This all emphasizes the value of uncertainty in learning. Uncertainty There is nothing wrong with being uncertain. Beyond Either/Or Related:  Critical Thinking

Irene Fountas and Gay Su Pinnell Reflect on Guided Reading Irene Fountas and Gay Su Pinnell Reflect on Guided Reading In this article in The Reading Teacher, balanced-literacy gurus Irene Fountas and Gay Su Pinnell celebrate the extraordinary spread of guided reading – and offer suggestions on how it can be optimally effective. Here are some of the key elements of guided reading that educators around the world have embraced: And here are the basic elements of the canonical guided reading lesson: Guided reading is “only one component of a comprehensive, high-quality literacy effort,” say Fountas and Pinnell. Whole-class interactive read-alouds (not leveled books);Small-group and whole-class literature discussion (not leveled books);Readers’ workshop with whole-group mini-lessons (not leveled books);Independent reading and individual conferences (self-selected, not leveled texts);The use of mentor texts for writing workshop. How well does this total package do? Try that again and think what would make sense.

How to Destroy Education While Making a Trillion Dollars The Vietnam War produced more than its share of iconic idiocies. Perhaps the most revelatory was the psychotic assertion of an army major explaining the U.S. bombing of the provincial hamlet of Ben Tre: “We had to destroy the village in order to save it.” If only such self-extinguishing claims for intelligence were confined to military war. The U.S is ratcheting up a societal-level war on public education. Here’s a three-step recipe for how to destroy education. First, lower the costs so you can jack up the profits. Second, make the curriculum as narrow, rote, and regimented as you can. Finally, rinse and repeat five thousand times. This is the essential charter school model and the money is all the rationale its promoters need. But to really make a killing, you need not just revenues, but profits. That is what real teachers do. If America wants better education, it needs to fix the greatest force undermining education, which is poverty. So watch out.

Fantastic and far-out formative assesment ideas | When Suzie Boss skyped in to chat with us for #plsm13 last month, I just knew that she would share with us some stunning but practical ideas for project-learning. If you’ve read Lee’s overview of the event, you’ll know that she didn’t disappoint. Two things that really stuck with me from her time with us, was the idea of ‘sticky learning’ (this is the learning that stays with students, that they can easily bring to mind, the real stuff, the deep learning) and also the challenge to be as creative with formative assessment strategies as we can. As you can tell from the title of this blog post, it’s the latter idea that I want to focus on. I was hoping you might be able to help me complete the challenge. - edmodo quiz - learning journals (goals/medals/missions protocol) - 30 second wrap-up (randomly select a student to give a summary of group’s goals and achievements for that lesson) - KWL table I am literally so brain dead at the moment that I can’t think of anything else that I use.

The real problem with multiple-choice tests Q) What is one responsibility that modern Presidents have NOT described in the Constitution? (From the 2010 NAEP exam) a) Commanding the armed forces b) Proposing an annual budget to Congress c) Appointing Supreme Court justices d) Granting pardons One of the biggest complaints about standardized tests is that the multiple-choice questions don’t measure deep thinking skills. Heick is an educator, husband, and father of three who is interested in improved social capacity through the design of progressive learning forms. (The answer to the question above is B, from the National Assessment of Educational Progress, 2010.) By Terry Heick The multiple-choice problem is becoming a bit of an issue. While it has been derided by educators for decades as incapable of truly measuring understanding, and while performance on such exams can be noticeably improved simply by learning a few tricks, the multiple choice question may have a larger, less obvious flaw that disrupts the tone of learning itself.

The Best Videos Showing The Importance Of Asking Good Questions — Help Me Find More I’ve previously posted The Best Posts & Articles About Asking Good Questions and now I’m starting to compile videos of movie or TV scenes that demonstrat the importance of asking good questions. I’m hoping that readers will point me in the direction of others and I’ll add them. I’m starting off with just a few courtroom examination scenes, but I’d like to get a variety of situations. I’m sometimes using TubeChop to show the most useful segments from longer clips, and I don’t think they will show up in an RSS Readers. So, subscribers will have to click through to seem them. Here are my choices for The Best Videos Showing The Importance Of Asking Good Questions: Here’s one from “My Cousin Vinny” — Unfortunately, I can’t seem to embed it here, but here’s the direct link to the video clip. Here’s a clip from “Legally Blonde”: I’m adding these clips of reporters interviewing public figures to this list. Mike Wallace from CBS News: The Frost Nixon Watergate full interview part 1: From “Invictus”:

A warning to college profs from a high school teacher For more than a decade now we have heard that the high-stakes testing obsession in K-12 education that began with the enactment of No Child Left Behind 11 years ago has resulted in high school graduates who don’t think as analytically or as broadly as they should because so much emphasis has been placed on passing standardized tests. Here, an award-winning high school teacher who just retired, Kenneth Bernstein, warns college professors what they are up against. Bernstein, who lives near Washington, D.C. serves as a peer reviewer for educational journals and publishers, and he is nationally known as the blogger “teacherken.” His e-mail address is kber@earthlink.net. This appeared in Academe, the journal of the American Association of University Professors. By Kenneth Bernstein You are a college professor. I have just retired as a high school teacher. I have some bad news for you. Troubling Assessments I mentioned that at least half my students were in AP classes. A Teacher’s Plea

Elements of Thought |How we think… The Seven Myths of Instructional Rigor Instructional rigor is one of the most discussed topics in education today. But there is much debate over what rigor is and is not. Let's look at seven myths, then a concrete definition of the actual meaning. Myth One: Lots of homework is a sign of rigor. For many people the best indicator of rigor is the amount of homework required of students. Myth Two: Rigor means doing more. “Doing more” often means doing more low-level activities, frequently repetitions of things already learned. Myth Three: Rigor is not for everyone. Some teachers think the only way to assure success for everyone is to lower standards and lessen rigor. Myth Four: Providing support means lessening rigor. In America, we believe in rugged individualism. Myth Five: Resources equal rigor. Recently, I’ve heard a common refrain. Myth Six: Standards alone take care of rigor. Standards alone, even if they are rigorous, do not guarantee rigor in the classroom. Myth Seven: Rigor is just one more thing to do. A Final Note Sources

How Texas Inflicts Bad Textbooks on Us by Gail Collins “What happens in Texas doesn’t stay in Texas when it comes to textbooks” No matter where you live, if your children go to public schools, the textbooks they use were very possibly written under Texas influence. If they graduated with a reflexive suspicion of the concept of separation of church and state and an unexpected interest in the contributions of the National Rifle Association to American history, you know who to blame. When it comes to meddling with school textbooks, Texas is both similar to other states and totally different. It’s hardly the only one that likes to fiddle around with the material its kids study in class. The difference is due to size—4.8 million textbook-reading schoolchildren as of 2011—and the peculiarities of its system of government, in which the State Board of Education is selected in elections that are practically devoid of voters, and wealthy donors can chip in unlimited amounts of money to help their favorites win. “Evolution is hooey”

10 Great Websites for Creating Free Online Exams and Quizzes Thinking about going online for assessments? Here, guest blogger, David Lazar, offers some suggestions. Once you try some (or if you have already) please let us know how it goes! ~EMP With the Internet continuing to influence education and classroom teaching methods more and more, it’s no surprise that many teachers are now taking their tests and quizzes online as well. Exam Builder This is one of the best online test makers. Google Docs Google Docs has a form application that you can use to create great quizzes. ProProfs This is one of the best looking and sleekest online quiz sites. Classmarker While some of the more advanced quiz features must be paid for, the free standard package offer on this site still gives you a lot of great options. MyQuizCreator EasyTestMaker Quibblo eQuizzer JavaScript QuizMaker