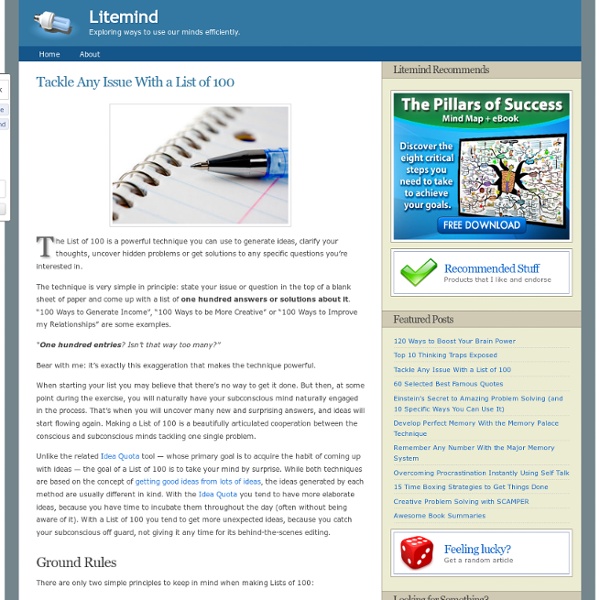 The List of 100 is a powerful technique you can use to generate ideas, clarify your thoughts, uncover hidden problems or get solutions to any specific questions you’re interested in. The technique is very simple in principle: state your issue or question in the top of a blank sheet of paper and come up with a list of one hundred answers or solutions about it. “100 Ways to Generate Income”, “100 Ways to be More Creative” or “100 Ways to Improve my Relationships” are some examples. “One hundred entries? Isn’t that way too many?” Bear with me: it’s exactly this exaggeration that makes the technique powerful. When starting your list you may believe that there’s no way to get it done. Unlike the related Idea Quota tool — whose primary goal is to acquire the habit of coming up with ideas — the goal of a List of 100 is to take your mind by surprise. Ground Rules There are only two simple principles to keep in mind when making Lists of 100: 1. 2. The Dynamics of Making Lists of 100 1. 2. 3.

12 Practical Steps for Learning to Go With the Flow “Life is a series of natural and spontaneous changes. Don’t resist them – that only creates sorrow. Let reality be reality. Start Your Day in 33 Different Ways Mornings are underrated. I consider them fundamental for the whole diurnal experience. What you do in the very first moments of your morning will fundamentally and inexorably shape your entire day. Most of the time you spend your mornings by routinely performing some habits, on auto pilot. Hence, your days will routinely unfold towards you, the same way day after day, on auto pilot. » The Habit Change Cheatsheet: 29 Ways to Successfully Ingrain a Behavior We are what we repeatedly do. Excellence, then, is not an act, but a habit. – Aristotle Our daily lives are often a series of habits played out through the day, a trammeled existence fettered by the slow accretion of our previous actions. By Leo Babauta But habits can be changed, as difficult as that may seem sometimes. I’m a living example: in tiny, almost infinitesimal steps, I’ve changed a laundry list of habits.

70 Ways to Increase Your Brain Power 28. Creatine. This is a compound found in meat, used by athletes to help build muscle. Now the evidence is here to show that it helps your brain as well. Proceedings B , a journal published by the Royal Society reports that the research showed improvement in working memory and general intelligence resulting from creatine supplementation. The dose used in the study was 5 grams per day.

Creativity Quotes From Mycoted The quotations here fall into two main categories. The first category is from people who have had a very restricted vision, with hindsight their comments can be used as powerful examples of what can happen if you don't allow creative thoughts to flourish. The second category is from people who have had a much more creative, open view of life. "Computers in the future may weigh no more than 1.5 tons." 50 Ways To Start Fresh Defeat. Boredom. Lack of meaning in your life. All these symptoms, and many others, of course, are a sign that you need to start fresh. Smile Into Your Organs: “A smile is an inexpensive way to improve your looks” Charles Gordy I love the idea that smiling is used as a healing and meditation practice by many ancient cultures. Taoists believe that holding a smile on your face and directing it inwards towards your organs and inner body, is the key to good health and longevity.

63 Ways to Build Self-Confidence Confidence is a tool you can use in your everyday life to do all kinds of cool stuff, not least to stop second-guessing yourself, manage your fears and become able to do more of the things that really matter to you. But not many people realise that their self-confidence works just like a muscle – it grows in response to the level of performance required of it. Either you use it or you lose it. That’s why I’ve given you 63 ways to grow your confidence so that you can become a giant. Learning is a Good Thing, so sign up for that evening class and enjoy it.Get out of your own head by asking your partner or best friend what you can do for them today.Hit the gym.

No Idea Left Behind: 25 Tools for Capturing Ideas Anywhere As a serial entrepreneur, I’m addicted to ideas. I feed off of ’em. And nothing makes me more upset than having a great idea… and losing it.