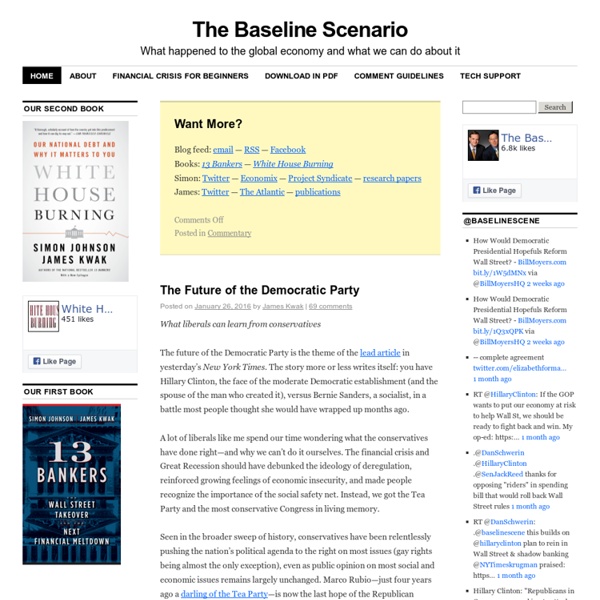 By Simon Johnson No doubt there is still a lot of shouting to come, but this week a team at the International Monetary Fund completely nailed the issue of whether large global banks receive an implicit subsidy courtesy of the American government. Is there a subsidy, is it large, and how much damage could it end up causing to the broader economy? The answers, in order, are: yes, there is an implicit subsidy that lowers the funding costs for very large banks; the subsidy is big, with costs of borrowing for these banks lowered by as much as 100 basis points, i.e., 1 percentage point; and yet this large scale of implicit support is small relative to the macroeconomic damage that is likely to be caused by the high leverage and incautious risk-taking that the subsidy encourages. If anything the IMF’s work provides a conservative (i.e., low) set of estimates.

DAILYBAIL The company also practices dirty accounting tricks like "forward funding," "advance funding," and "delayed obligations," deceptive tricks that hide its precipitous finances from auditors and its investors. This company routinely borrows from its workers' pension plan to pay off its debt. Its accountants then claim that because the company owes the borrowed money to its own pensioners and not to outside creditors, the resulting hole in the pension plan doesn't really count as a liability.

dshort.com - Financial Life Cycle Planning S&P 500 Snapshot: A Sine Wave and Closing RallyApr 15, 2014 Doug Short Before the market opened, the Consumer Price Index for March came in higher than forecast, although inflation remains exceptionally tame, and the Empire State Manufacturing Survey was surprisingly weak. S&P 500 ignored the economic data and resumed yesterday’s closing rally to its morning high about 20 minutes later. Real Time Economics China’s GDP growth fell in the first quarter to its slowest pace since September of 2012, slipping to 7.4% on-year growth from 7.7% the in the fourth quarter. The increase was slightly higher than economists’ expectations of a 7.3% gain. Authorities released other data that suggested continuing weakness, but not at a quickening pace. Industrial production grew 8.8% on year in March below expectations of 9% but up from an average 8.6% expansion in January and February, combined to limit distortions from the Lunar New Year holidays.

Historical Collection Publications The Historical Review Program, part of the CIA Information Management Services, identifies, collects and produces historically relevant collections of declassified documents. These collections, centered on a theme or event and with supporting analysis, essays, video, audio, and photographs, are showcased in a booklet and DVD that are available to the academic realm and the public. Intelligence Community History International Relations Cold War Topics Hardcopy publications are available to the public through the Government Printing Office [external link disclaimer]. Credit Slips Today is the day for filing amicus briefs with the U.S. Supreme Court in NML v. Argentina (pari passu case). Brazil, France, Mexico, the Jubilee Network and Nobel Laureate Joseph Stiglitz are all asking the court to take the case. Others will doubtless come in on all sides; then the court might ask for the United States to say something ... it's a long story; stay tuned. For now, I only highlight Mexico's priceless intervention against the courts' misuse of Collective Action Clauses (CACs) in the pari passu argument.

A Dash of Insight This week brings the makings of an explosive volatility cocktail: Important economic data; Key Q1 earnings reports; Options expiration; A short trading week; and An edgy market environment. This is a very unusual combination, and the various elements will compete for attention. Prior Theme Recap Last week I expected the theme to test the divergence between economic fundamentals and what I called "fluff." Tim Harford's Undercover Economist blog on the economics of everyday life Tuesday archive : If the price is right From 8th July, 2006. If you want to be rich, you can try to set up a brilliantly successful company. Or you can steal money.

The Spy Who Billed Me Seymour Hersh was likely counting on his reputation cutting through any obstacles that could prevent him from pulling off what is probably the last “blockbuster” of his career. And he did meet an obstacle: He is pretending to break a broken story—and he knows it. Tuesday evening on Democracy Now! Hersh tried to slide by my allegations of unethical behavior.[1] Hersh commented: IRA Analyst - A Crime Called Private Mortgage Insurance; Alex Pollock on the Political Finance of Covered Bonds Basel III and Capital Adequacy: Are We Paying Enough Attention to Consequence Risks?October 29, 2013 As part of our ongoing R&D process to review and adjust our analytics systems as U.S. banking regulations evolve, we regularly read the Financial Information Letters (FIL’s) published by the FDIC. On July 9, 2013, the FDIC released three Financial Institution Letters on Capital Adequacy and Liquidity requirements for Basel III compliance requesting comments. FIL-31-2013, “Regulatory Capital Rules: Regulatory Capital, Implementation of Basel III, Capital Adequacy, Transition Provisions, Prompt Corrective Action; Standardized Approach for Risk-Weighted Assets; Market Discipline and Disclosure Requirements”

Economist's View Gauti Eggertson and Neil Mehotra have an interesting new paper: A Model of Secular Stagnation, by Gauti Eggertsson and Neil Mehrotra: 1 Introduction During the closing phase of the Great Depression in 1938, the President of the American Economic Association, Alvin Hansen, delivered a disturbing message in his Presidential Address to the Association (see Hansen ( 1939 )). He suggested that the Great Depression might just be the start of a new era of ongoing unemployment and economic stagnation without any natural force towards full employment. 10 Groups That Don’t Flinch Under Fire (And, Thus, Deserve Your Support) Here at CounterPunch we get lots of calls from readers this time of year asking: where are the good groups? Where can I send a year-end check and know that the money will be well spent, not recycled into a fat executive salary or an annoying direct mail campaign? There are many such groups out there; indeed, there is a vibrant and thriving grassroots movement across a whole range of issues. Unfortunately, we can’t bring all of them to your attention. But once or twice a year we devote the pages of CounterPunch to a survey of what these organizations are up to.

Finance and Business Blog Skip to main content Skip to primary navigation Submit an article Register Log in [ClearOnMoney] 5 Jan 2014 by Jim Fickett. The Census Bureau collects comprehensive accounts of state and local government finances. In particular, Census is the only source for an overall total figure for state and local government debt. Because there are many municipalities, these data are issued with a long delay, and the latest data current available are for 2011.