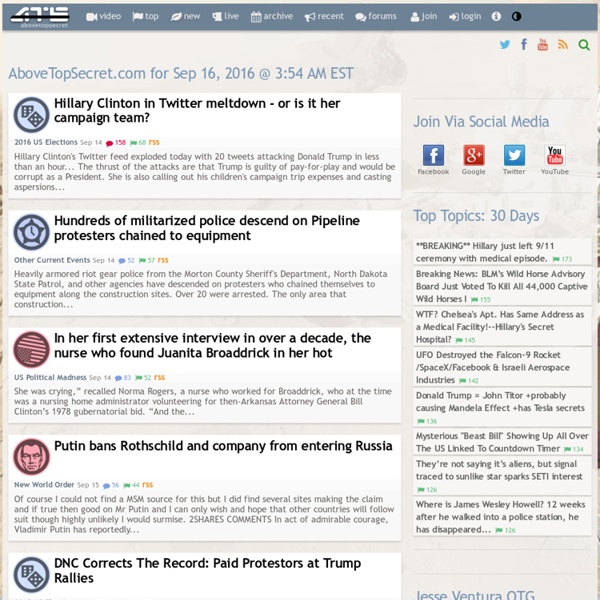 Water, Oil and Gas, resource wars: the Stans of Central Asia « Law in Action Tajikistan's president, Emomali Rakhmon, likes things big. He has built the world’s tallest flagpole. Last year he opened the region’s largest library (with few books in it so far). CIA Pilot Swears Oath: Planes DID NOT Bring Towers Down On 9/11 [Video] Former CIA officer and commercial jet pilot John Lear has sworn an affidavit saying that the Twin Towers were not bought to the ground by planes crashing into them on 9/11. In Lear’s expert opinion the official claim that two planes crashed into the towers is actually “physically impossible.” With reports from the Kremlin this week that President Putin is ready to release satellite images proving that the Twin Towers were destroyed by “controlled demolition” rather than by the force of two planes, enormous strides towards disproving the official 9/11 Commission version are taking place. An affidavit is serious business in law.

World News - Al Jazeera English Below is a list of the cookies used on the current page, as defined by the URL in the address bar. You can view more details about these cookies by accessing the cookie settings in your browser and viewing the cookies. Please note that processing of your personal data in connection with cookies, and for other purposes, is governed by our Privacy Policy. In addition, we may also use web beacons (or clear GIFs) and other similar technologies in addition to, or in combination with, cookies. A web beacon is typically a transparent graphic image (usually 1 pixel by 1 pixel) that is placed on a website or in an email and it helps us to the bahavious of visitors of our website. More inforamtion on web beacons can be found at Please note that Al Jazeera has no affiliation with, and is not responsible for, this third party website.

Nuclear waste: the 270-tonne legacy that won’t go away Rebecca Harms was 18 when she started campaigning for solutions to nuclear waste-storage in Germany. The Green Party MEP is now nearing her 56th birthday, but the country isn’t any closer to burying its radioactive waste. Last year – after decades of on-off drilling at the site of an old salt dome in north Germany and more than a billion euros of public money spent – the federal government announced it was starting from scratch with its search for a suitable site for a “deep geological repository” in which to store spent fuel. Germany is not alone. “None of the countries which started to use nuclear fission for power production 50 years ago have an acceptable solution for nuclear waste and final storage. None,” Harms says wearily, speaking on the telephone from Brussels.

Video Of Prince Talking About Chemtrails & The New World Order As most of you reading this probably know by now, music legend Prince passed away yesterday at the age of 57. His memory will assuredly live on, especially here at Collective Evolution. Not long ago, Prince shared one of our articles on his Facebook page, and he has spent much of his time raising awareness about issues threatening our safety. In particular, he has spoken about ‘chemtrails,’ otherwise known as geoengineering, and the New World Order. Several years ago, Prince was a guest on a show hosted by Travis Smiley, an American talk show host, author, political commentator, and activist.

Gordon Brown calls for global government to tackle coronavirus Gordon Brown has urged world leaders to create a temporary form of global government to tackle the twin medical and economic crises caused by the Covid-19 pandemic. The former Labour prime minister, who was at the centre of the international efforts to tackle the impact of the near-meltdown of the banks in 2008, said there was a need for a taskforce involving world leaders, health experts and the heads of the international organisations that would have executive powers to coordinate the response. A virtual meeting of the G20 group of developed and developing countries, chaired by Saudi Arabia, will be held on Thursday, but Brown said it would have been preferable to have also included the UN security council. “This is not something that can be dealt with in one country,” he said. “There has to be a coordinated global response.” Brown said the current crisis was different to the one he was involved in.

Unclaimed Money Search - Find Unclaimed Property and Lost Money An unclaimed asset becomes abandoned in the eyes of the law when an owner or heir fails to communicate an interest in it over a period of years, known as the dormancy period. The government takes custody of billions of dollars annually in lost money and unclaimed property in a legal process known as "escheat." In most cases unclaimed money may be claimed indefinitely, but there are exceptions. Finding lost money is complicated by the fact that there is no central repository for unclaimed funds. Each state and the District of Columbia maintains a missing money database, but there is no true national unclaimed property database. A 1965 US Supreme Court decision allows unclaimed money to be held just about anywhere, regardless of where you now live.

PMI.com What's in Our Combustible Tobacco Products? The main component of our cigarettes is tobacco. In addition to tobacco, we add ingredients to our brands to 1) keep the tobacco moist; 2) help facilitate the manufacturing process; and 3) provide distinctive tobacco tastes and aromas. The non-tobacco materials (e.g., cigarette paper and filters) we use also contain ingredients. For information about the ingredients in individual cigarette components please select from the list below. It is important to note that cigarettes with or without ingredients cause serious disease and are addictive.

New World Order Will Not Be Western-Oriented I ranian Foreign Minister Mohammad Javad Zarif said the international order has been experiencing a transition and will not be a Western-oriented anymore. “Throughout history, the old order has collapsed and been replaced with a new one after widespread bloodshed … The modern international order will not be totally Western anymore,” he said in a live Instagram conversation titled “the World in Transition” on Monday, IRNA reported. According to Zarif, the transition period kicked off around 30 years ago [after the Cold War] when “the bipolar regime which reigned in the world for several decades crumbled”. Since then, efforts continue to shape the new world order and have become more intense with the outbreak of the coronavirus, he added.

Smallpox and Pseudomedicine A good case of smallpox may rid the system of more scrofulous, tubercular, syphilitic and other poisons than could otherwise be eliminated in a lifetime. Therefore, smallpox is certainly to be preferred to vaccination. The one means elimination of chronic disease, the other the making of it.Naturopaths do not believe in artificial immunization . . .—Harry Riley Spitler, Basic Naturopathy: a textbook (American Naturopathic Association, Inc., 1948). Quoted here.

There are some crazies on here, but with a little common sense and reserve, you can find some great truths on here. Just don't believe every cheeseball on here, cept me of course. ;) by indracanna May 24