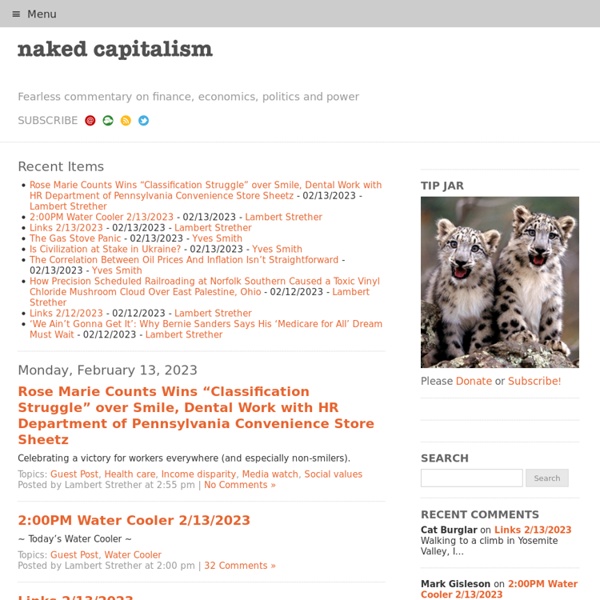 Yves here. This post summarizes a paper that argues that derivatives, specifically credit default swaps, exacerbated the severity of the European sovereign debt tsuris. This sort of analysis deserves a wider audience, precisely because the prejudice of both neoclassical and neoliberal economists is that markets are ever and always virtuous, and that prices are never wrong unless someone is interfering (with labor unions the preferred bad example).

DAILYBAIL The company also practices dirty accounting tricks like "forward funding," "advance funding," and "delayed obligations," deceptive tricks that hide its precipitous finances from auditors and its investors. This company routinely borrows from its workers' pension plan to pay off its debt. Its accountants then claim that because the company owes the borrowed money to its own pensioners and not to outside creditors, the resulting hole in the pension plan doesn't really count as a liability.

ZNet Welcome to ZCommunications. The site has ZNet and ZMag content, topic and place pages under the Focuses link in the top menu - reading lists and whole books, debates, interviews, multimedia, Blogs, Forums, comments, a Store, Sustainer program, WISC, and more. Relating to Z VIX and More Ready Made Resources Solar Power Disaster Preparedness Store Emergency Supplies - U.S. Survival AR-7 Dont Leave Civilization Without One COLLAPSIBLE FFL REQUIRED FREE SHIPPING Since 1959, the venerable AR-7 has been the choice of U.S. Air Force pilots who need a small-caliber rifle they can count on for survival should they have to punch out over a remote area. Over the years, the AR-7's reputation for portability, ease of operation and reliability has carried over to the civilian world as well. Today, it's a favorite of bush pilots, backpackers and backcountry adventurers who, like their Air Force counterparts, need a rifle that's easy to carry but has the accuracy to reliably take down small game. Like the original Henry US Survival Rifle, our latest take on this innovative, semi-automatic rifle is lightweight (just 2.5 lbs) and highly portable.

Credit Slips Today is the day for filing amicus briefs with the U.S. Supreme Court in NML v. Argentina (pari passu case). Brazil, France, Mexico, the Jubilee Network and Nobel Laureate Joseph Stiglitz are all asking the court to take the case. Others will doubtless come in on all sides; then the court might ask for the United States to say something ... it's a long story; stay tuned. For now, I only highlight Mexico's priceless intervention against the courts' misuse of Collective Action Clauses (CACs) in the pari passu argument. Weblog and Essays Let's Clear Up One Confusion About Bitcoin November 3, 2017 If bitcoin can be converted into fiat currencies at a lower transaction cost than the fiat-to-fiat conversions made by banks and credit card companies, it's a superior means of exchange. One of the most common comments I hear from bitcoin skeptics goes something like this:Bitcoin isn't real money until I can buy a cup of coffee with it. In other words, bitcoin fails the first of the two core tests of "money": that it is a means of exchange and a store of value. If we can't buy a cup of coffee with bitcoin, it obviously doesn't qualify as a means of exchange.

RadNet Map Interface EPA's nationwide radiation monitoring system, RadNet, consists of two components. First, stationary and deployable air monitors measure radiation 24 hours a day, 7 days a week. The map below provides monitoring results as graphs that are updated several times daily. You can also search the RadNet database in EPA's Central Data Exchange (CDX) to find monitoring data. Finance and Business Blog Skip to main content Skip to primary navigation Submit an article Register Log in The Myth Of The Resolution Authority By Simon Johnson Back when it really mattered – last spring, during the Dodd-Frank financial reform debate – Senator Ted Kaufman of Delaware emphasized repeatedly on the Senate floor that the proposed “resolution authority” was an illusion. His point was that extending the established Federal Deposit Insurance Corporation (FDIC) powers for “resolving” (jargon for “closing down”) financial institutions to include global megabanks simply could not work. At the time, Senator Kaufman’s objections were dismissed by “experts” both from the official sector and from the private sector. Now these same people (or their close colleagues) are falling over themselves to argue resolution cannot work for the country’s giant bank holding companies.

NT Times - DealBook What Awaits Banks After the Leverage Ratio The Basel Committee is considering rules that will affect banks’ business strategies significantly and continue to influence how they strengthen their auditing and compliance teams for years to come, writes Mayra Rodríguez Valladares in Another View. Read more… Time to Reduce Repo Run Risk Banks remain vulnerable to sudden runs because of their dependence on short-term borrowing, but Dodd-Frank contains many tools that regulators can use to reduce risk, contends Jennifer Taub in Another View. Read more…