Creative Destruction: The Rice-Olmert-Ledeen Project for a “New Middle East” By Mahdi Darius Nazemroaya. The following article was first published in 2006, it is being reprinted for its relevance today to what is still going on in the Middle East. 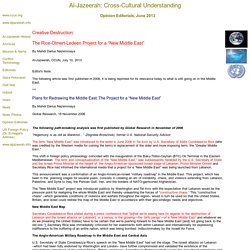 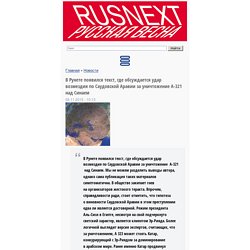 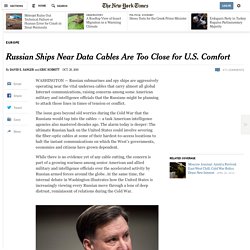 The issue goes beyond old worries during the Cold War that the Russians would tap into the cables — a task American intelligence agencies also mastered decades ago. The alarm today is deeper: The ultimate Russian hack on the United States could involve severing the fiber-optic cables at some of their hardest-to-access locations to halt the instant communications on which the West’s governments, economies and citizens have grown dependent. While there is no evidence yet of any cable cutting, the concern is part of a growing wariness among senior American and allied military and intelligence officials over the accelerated activity by Russian armed forces around the globe. In Major Humiliation For Obama, Iran Sends Soldiers To Support Russian Troops In Syria. When Zero Hedge first reported ten days ago that Russian troops, in their bid to support the Assad regime in its ongoing confrontation with various ISIS, Al Nusra, and other US-supported groups in what has become the proxy war of 2015 (one which even comes with thousands of refugees for dramatic media impact) had been quietly massing in Syria and have set up a forward operating base near Damascus, there were those who were openly skeptical. 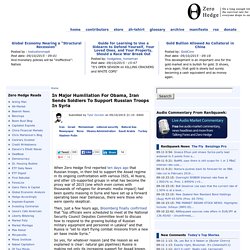 Then, just a few hours ago, Bloomberg finally confirmed that "top officials were scheduled to meet at the National Security Council Deputies Committee level to discuss how to respond to the growing buildup of Russian military equipment and personnel in Latakia" and that Russia is "set to start flying combat missions from a new air base inside Syria. " This answers our question from earlier this week: So what does Iran joining the conflict really mean? Your rating: None Average: 4.5 (37 votes) Quantum Geopolitics. How Islamic State Victories Shape the Syrian Civil War. Forecast The Islamic State will prioritize the defense of its core supply lines, used to provide equipment and much-needed recruits.The Islamic State will continue to demonstrate considerable flexibility in its offensive operations. 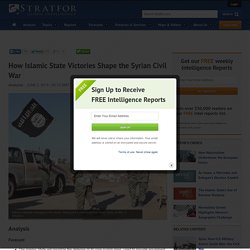 The Syrian government and rebel forces will have to increasingly devote their attention and resources to fighting the Islamic State, rather than prioritizing battles with each other. In a display of considerable flexibility on the battlefield, the Islamic State managed to take rebel forces in northern Aleppo by surprise with a large-scale offensive aimed at securing more territory along the Syria-Turkey border. After drawing down its forces in the area, the Islamic State's sudden tactical shift resulted in considerable initial gains against the rebels. Islamic State fighters seized Sawran and are advancing near Mare. Удар в спину России нанесут из Приднестровья. Большая геополитическая игра на Украине продолжается. 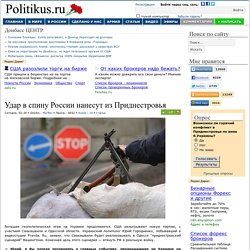 South China Sea Dispute Heats Up - Geopoliticalmonitor.com. China’s recent construction on disputed atolls in the South China Sea has accelerated the stop-start cycle of dispute there. 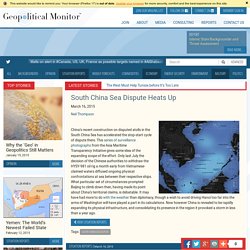 Russia questions Britain's claim to the Falklands as garrison reinforced. Saudi Warplanes Hammer Yemen as Rebels Near Complete Takeover. Saudi Arabia has launched airstrikes into neighboring Yemen to try to blunt the advances of the Iranian-backed militia that holds sway over the country’s capital and is closing in on one of the last government-held cities. 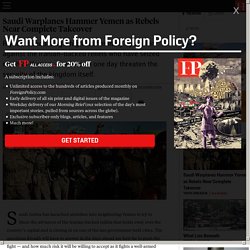 The questions Riyadh will have to answer in the days ahead are how far to push the fight — and how much risk it will be willing to accept as it fights a well-armed and well-trained enemy. Saudi Arabia has been watching Yemen’s steady disintegration with mounting alarm for weeks, but a stunning sequence of events Wednesday finally spurred the kingdom to mount a high-stakes military push into its impoverished neighbor. Over the course of a tense 24 hours, Yemen’s president, Abed Rabbo Mansour Hadi, fled the country by boat as Houthi forces bombed targets near his hideout in Aden, the southern port city where he had taken refuge after fleeing the capital of Sanaa. A military intervention carries other risks. Washington is facing a similar challenge. Saudi Arabia and Iran Compete in Yemen. Summary While the al-Houthi movement struggles to manage multiple regional challenges to its north, its rise to power in Yemen is a setback for Saudi Arabia on its southern flank. 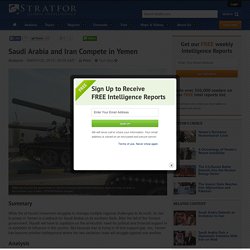 After the fall of the Yemeni government, Riyadh will have to capitalize on the al-Houthis' need for political and financial support to re-establish its influence in the country. But because Iran is trying to fill that support gap, too, Yemen has become another battleground where the two sectarian rivals will struggle against one another.

A Net Assessment of East Asia. By George Friedman When I began this series a month ago, I pointed out that the most significant feature of the global system currently is the ongoing destabilization of the Eurasian land mass, from the Atlantic to the Pacific, from the Arctic to the Arabian Sea. 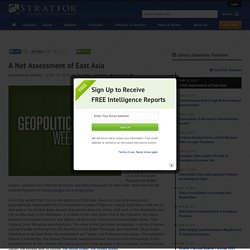 One important aspect of this is that the destabilization isn't, at this point, a single systemic crisis, but a series of relatively self-contained disorders. Thus the European, Russian and Middle Eastern systems have different dynamics, and while they touch on each other, they have not yet reached the point of having merged into a single crisis. It is in this context that I turn to the question of East Asia. Asia is so vast and diverse and geographically fragmented that it is impossible to speak of Asia as a whole. East Asia shares one major feature with the rest of Eurasia. Economic Development in Japan and Korea Japan is an island group almost completely bereft of raw materials. China Enters the Next Economic Phase. Could the Iran Deal Lead to a Syria Deal? A Fine Balance: China’s Need for Resources and Stability in the South China Sea. The shift in demographic and economic weight from Europe to East Asia has intensified over the past 20 years, which makes East Asia and its coastal areas increasingly important – a critical shift in current and future international relations dynamics underscored by the United States’ (US) “Pivot to Asia” or East Asian foreign policy of the Obama administration.

Economic and Strategic Importance of the Spratly Islands Disputes in the South China Sea are exacerbated by the economic and strategic importance of the area. Syrian War Takes Rising Toll on Hezbollah. The powerful Iranian-backed Hezbollah militia is suffering mounting battlefield casualties in neighboring Syria, as Tehran’s most important proxy plunges ever deeper into a potential quagmire. With Hezbollah increasingly shouldering the burden of the war on behalf of Syrian President Bashar al-Assad’s regime, the Lebanese militia faces the risk of overextending itself and puncturing its carefully cultivated image as an invincible fighting force, according to U.S. and Mideast officials.

Hezbollah units are now spearheading the fight against opposition rebel groups while the faltering Syrian army plays a supporting role. A difficult calm. Yemen’s main warring factions endorsed a U.N. -brokered humanitarian truce from midnight on Friday although heavy fighting on the ground and Saudi air strikes carried on relentlessly. The week-long truce will end at the same time as the Muslim holy month of Ramadan and aims to get aid to some 21 million Yemenis. All sides said they hoped a full ceasefire would follow. How Europe loses twice in Greece : July : OMFIF.

Greece threatens US and Nato engagement in Mediterranean by John Kornblum Thu 2 Jul 2015. What Are the Geostrategic Implications of a Grexit? On June 14, when F-15E fighter jets bombed Mokhtar Belmokhtar, an al Qaeda commander in North Africa, the United States expanded the war on terrorism with its first explicit counterterrorism airstrike in Libya. What began with limited airstrikes in Afghanistan on Oct. 7, 2001, to topple the Taliban has expanded to seven other countries — Yemen, Iraq, Pakistan, the Philippines, Somalia, Libya, and Syria — with sustained military or counterterrorism operations against terrorist groups and militant armies, most with no connection to 9/11 or any apparent intention or capability to directly attack the United States.

But while its alleged enemies have evolved, America’s strategy has not. Want to escalate U.S.-Russia tension? Arm Ukraine. Members of the Ukrainian armed forces prepare a weapon at their position located near the town of Horlivka, north of Donetsk, Ukraine, June 6, 2015. China To Philippines: Stop "Roping In" Other Countries In Sea Standoff. Putin Unexpectedly Calls Obama: What Did They Talk About?