JohnPilger.com - the films and journalism of John Pilger 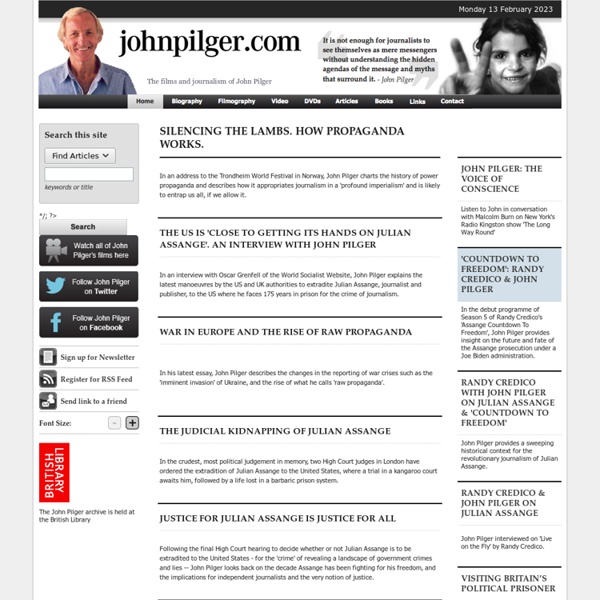 Record 4,000 audience attend open-air premiere of Utopia in Australia WATCH UTOPIA ONLINE | TRAILER | JOHN PILGER'S VIDEO MESSAGE | SCREENINGS | REVIEWS | BUY DVD (UK) | BUY DVD (AUS) | OFFICAL UTOPIA WEBSITEJohn Pilger's epic new film, Utopia, had its premiere in the urban heart of Indigenous Australia, in the Middle of Sydney, on 17 January 2014. The crowd filled the equivalent of two football pitches. Indigenous and non-indigenous Australians came from all over the country to hear the call for a renewed struggle for justice and freedom for Australia's first people.Utopia, already released and broadcast in the UK, is named by the London Film Review as one of the five best films of the year.On 30 January 2014, Utopia began its Australian cinema release at Cinema Nova in Melbourne. For details of other screenings of Utopia in Australia and New Zealand, visit the official Utopia website

Quentin Tarantino has written his resignation letter with Once Upon a Time in Hollywood Opinion Updated yesterday at 5:34amSun 18 Aug 2019, 5:34am Television is everywhere in Quentin Tarantino's Once Upon a Time in Hollywood. The Ecologist Top 10 foods to forage Thanks to modern agricultural methods, foraging – once a part of the majority’s daily life – has faded away, replaced by regular trips to the supermarket instead. Recently, however, there has been a revival of interest in raiding nature’s larder thanks to increased awareness of the health benefits of wild food, not to mention the TV exploits of Bear Grylls, Ray Mears and co. But it foraging is about more than just food. The science behind why fake news is so hard to wipe out In the immediate aftermath of the October 1 night massacre in Las Vegas, Facebook and Google — the two largest distributors of news and information in the world — helped to spread misinformation. In its “top stories,” Google featured a 4chan forum — an anonymous message board notorious for fueling conspiracy theories — that misidentified the shooter as a Democrat with ties to leftist, anti-fascist groups, as BuzzFeed’s Ryan Broderick found out. On Facebook, “trending stories” featured articles about the shooter from Sputnik, a Russian propaganda outlet, a New York Times reporter noted.

These three firms own corporate America A fundamental change is underway in stock market investing, and the spin-off effects are poised to dramatically impact corporate America. In the past, individuals and large institutions mostly invested in actively managed mutual funds, such as Fidelity, in which fund managers pick stocks with the aim of beating the market. But since the financial crisis of 2008, investors have shifted to index funds, which replicate established stock indices, such as the S&P 500. The magnitude of the change is astounding: from 2007 to 2016, actively managed funds have recorded outflows of roughly US$1,200 billion, while index funds had inflows of over US$1,400 billion. In the first quarter of 2017, index funds brought in more than US$200 billion – the highest quarterly value on record.

Beating Up - A Report on Police Batons and the News Media at the World Economic Forum, Melbourne, September 2000, by Dr. Bernard Barrett, Historian Forwarded to the Office of the Ombudsman, Victoria, 15 November 2000 Revised 28 November 2000 From 1977 until he retired in 1993, the author was the State Historian for the Government of Victoria, responsible for promoting research and public awareness about Victoria’s cultural heritage. Introducing the First Draft Coalition – First Draft Imagine the following situation: you’re sitting at your computer or looking at your mobile phone, when suddenly you come across a powerful first-person video on YouTube, or a visceral image on Twitter, depicting a breaking news event. You want to share it, but it’s coming from a source or a person you’ve never heard of before so you find yourself wondering… “is this real?” If you’re a journalist working in a newsroom today, it’s likely you’ve found yourself in this situation many times before, if not many times a day. In those crucial moments in the aftermath of a breaking news event, like the Charlie Hebdo attacks in Paris or the earthquake in Nepal, eyewitness documentation can be essential to piecing together what happened. The revolution in user-generated news content presents a great opportunity to expand our view of the world, but it also raises entirely new challenges for the news industry to grapple with. How and where do you find these images?

Obama tried to give Zuckerberg a wake-up call over fake news on Facebook Adam Entous Reporter who wrote about national security, foreign policy and intelligence. September 24, 2017 So, Mark Zuckerberg wants to repent for Facebook's sins? He can start here Along with his fellow Jews, Mark Zuckerberg introspected over Yom Kippur and asked for forgiveness via Facebook from “those I hurt this year … for the ways my work was used to divide people rather than bring us together”. He promised to “work to do better”. Presumably, Zuckerberg was referring to the two types of harm that Facebook has recently acknowledged causing: allowing Russian nationals to purchase Facebook ads to aid Donald Trump’s 2016 campaign and allowing ad buys on hateful search terms. It took congressional investigations, a special counsel investigation, and great reporting by Politico to get Facebook to fess up to these sins. It took President Obama pulling Mark Zuckerberg aside shortly after the election and schooling him in Facebook’s responsibility for distributing electioneering lies.

How to Write a Blog: The 12 Dos and Don'ts of Writing a Blog Thinking about writing a blog? Been writing a blog for some time now and have yet to establish any growth (and by “growth” I mean “increased pageviews”)? Over the past 10 years I’ve refined my blogging skills—that’s right, I started my first blog back in 2001 and it is so embarrassing by today’s standards that I’m almost unwilling to link to it … almost. Blogs for writers are everywhere, and there’s often good advice on them about writing a blog. There’s also plenty of not-so-good advice. How to Mix Humor Into Your Writing A man walks into a bookstore. “Where’s the self-help section?” he asks the clerk. Why AAP's closure is a brutal hit to Australia's concentrated media market The wires agency Australian Associated Press announced on Tuesday it will close in June, with 180 jobs being lost. A lot of people are outraged. What is a wires agency? A wires agency is a behind-the-scenes outlet that keeps the newspapers and websites you read each day ticking over.