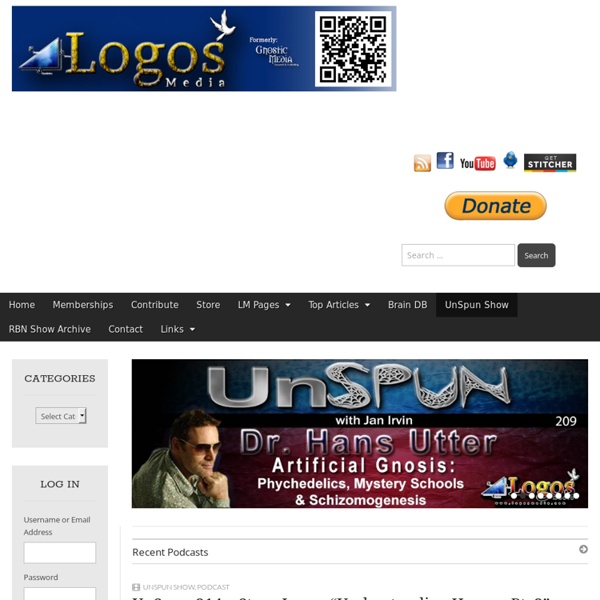 Today Dave McGowan rejoins the Gnostic Media podcast for part 2 to discuss “The CIA and the Music of Laurel Canyon – The Magic Carpet Ride”. This episode is being released on Tuesday, April 8, 2014, and was recorded April 3, 2014. David McGowan was born and raised in the suburbs of Los Angeles, California, where he still resides. After graduating from UCLA in 1983 with an unused degree in psychology, he went to work in construction and now works as a general contractor. He is the proud father of three daughters and is a lifelong music fan. USS Bon Homme Richard (Admiral George Morrison’s ship):

DMT The Spirit Molecule FULL DOCUMENTARY…♥♥♥… WoW… a few years back i was just-an-inch away from getting this… i rather thought i should buy this later.. man only after a few months i realised it has been BANNED world-over…hmm i Missed it !!!…. But since i did tried I-dosage…e-DMT.. i would better avoid it…Not my peace of Cake though…. The Spirit Molecule investigates dimethyltryptamine (DMT), a molecule produced abundantly throughout nature, including humans, and potentially existing in every living organism. Dr.

What is Religion? Definitions and Quotes 25.2KGoogle + What is the Definition of Religion? The question is not easy to answer. As St. Augustine said of time, most of us know perfectly well what religion is - until someone asks us to define it. The groups, practices and systems that people identify as "religions" are so diverse that it is no easy task to bring them all under one simple definition. Manipulating Marijuana: Monsanto and Syngenta Invest In RNA Interference Technology CANNABIS CULTURE - Having been cultivated and used ceremonially, recreationally and medicinally for thousands of years, cannabis – despite prohibitive laws surrounding the non-medicinal use of the plant – is undoubtedly on the radar of big agribusiness. These companies would certainly turn a profit from developing a patentable transgenic seed for sole distribution if the use of cannabis were to become legal. It would be easy for these companies to create a monopoly over the industry by abusing their ties with federal regulators. This has all been a point of much debate within the cannabis community for many years.

Hierarchy of Needs What motivates behavior? According to humanist psychologist Abraham Maslow, our actions are motivated in order achieve certain needs. Maslow first introduced his concept of a hierarchy of needs in his 1943 paper "A Theory of Human Motivation" and his subsequent book Motivation and Personality.

Between Life and Death: How Peyote Saved My Life in Mexico 1st February 2015 By Sergey Baranov Guest Writer for Wake Up World It was November 2008 when my sixth and last visit to Mexico surpassed all my expectations. Let’s Abolish Central Banks! - Coordination Problem Central banks and their monopoly on notes issuance have been around for quite a while. The Bank of England, perhaps the oldest institution of its kind, was established at the end of the 17th century. La Banque de France was established in 1800 by Napoleon to help him, among other things, finance his military conquests. The Federal Reserve System was established in 1913 to help avoid bank runs and panics and "to furnish an elastic currency, to afford means of rediscounting commercial paper, to establish a more effective supervision of banking in the United States, and for other purposes" (the latter includes striking a balance between private interests of banks and the centralized responsibility of government).

Cannabis & The Pineal Gland - Turn On The Third Eye Source: www.wakingtimes.com | Original Post Date: January 14, 2013 – The Pineal Gland or the ‘Seat of the Soul’ as described by Rene Descartes, is the focal point of our spiritual guiding system which makes us go beyond the five senses of rationality and become multisensory, tuned into and aware of higher dimensions of consciousness within a holographic cosmos. Cannabis or Marijuana among other psychedelics facilitates the activation of the pineal gland and helps turn on the third eye or the mind’s eye directing our spiritual evolution to wholeness. The pineal gland, located in the centre of the brain, is about a quarter of an inch in size, reddish-gray, and weighs about one-tenth of a gram.

Changa 5th February 2015 By Graham Hancock Guest Writer for Wake Up World One evening six sovereign adults, taking full responsibility for their own consciousness and their own bodies, gathered for sacred ceremony with changa, a herbal mixture rich in monamine oxidase inhibitors and infused with the forbidden fruit of DMT. I was one of those adults and the two bowls I smoked were respectively my twelfth and thirteenth journeys with inhaled DMT.