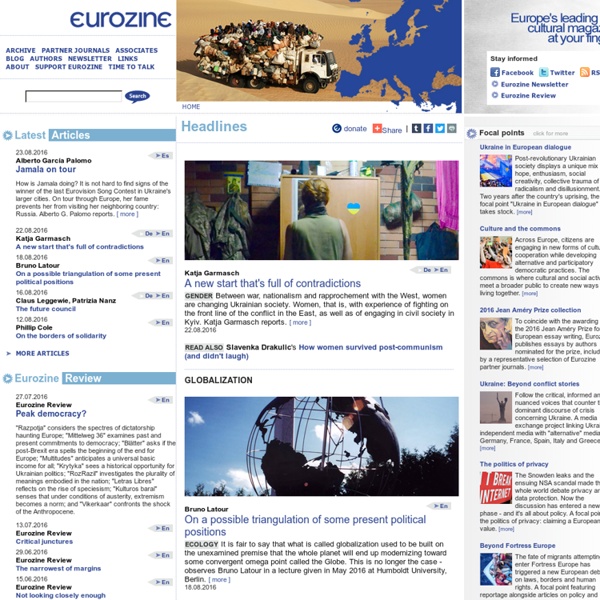 Ukraine in focus Ten years after the Orange Revolution, Ukraine is in the throes of yet another major struggle. Eurozine provides commentary on events as they unfold and further articles from the archive providing background to the situation in today's Ukraine. [more] The ends of democracy At a time when the global pull of democracy has never been stronger, the crisis of democracy has become acute.

Main Page 2. Act normal If you are a high-risk source, avoid saying anything or doing anything after submitting which might promote suspicion. In particular, you should try to stick to your normal routine and behaviour. 3. Remove traces of your submission Coilhouse “Alternative subcultures. They were a crucial aspect of industrial civilization in the two previous centuries. They were where industrial civilization went to dream. A sort of unconscious R&D, exploring alternative social strategies … but they became extinct.” A Brief History Of Media Cover-Ups & Self-Censorship: Who’s Afraid of Russ Baker’s “Family Of Secrets” - By Matt Harvey On February 17, 1967, the newspapers ran stories about a sensational new investigation into JFK’s assassination, headed by a New Orleans DA named Jim Garrison, who called into question the “lone gunman” theory laying all the blame on Lee Harvey Oswald. Five days after the news story broke, the prime target of Garrison’s investigation, David Ferrie, a right-wing pilot linked to the CIA, was found dead of a “cerebral hemorrhage.” Public opinion was polarized over JFK’s assassination.

Harvard Seeks to Jolt University Teaching - Teaching By Dan Berrett Cambridge, Mass. A growing body of evidence from the classroom, coupled with emerging research in cognitive psychology and neuroscience, is lending insight into how people learn, but teaching on most college campuses has not changed much, several speakers said here at Harvard University at a daylong conference dedicated to teaching and learning. Explore, Play, Discover: Websites & Activities Search form Search Low-cost, teacher-tested activities for the classroom and the curious. Online Articles Parties recover from defeat in two ways. They can try to beat the opposition at their own game, or they can try to change the rules of the game. Donald Trump did the latter. Now it’s the Democrats’ turn.

Home Liz Else, CultureLab editor Nothing is off limits for CultureLab. We've loved neuroaesthetics, the art of synthetic biology, strangeness in suburbia, Turing musicals - in fact, just about everything in that fabulous place where books, arts and science intersect. That won't change as we move closer into the New Scientist fold. The CultureLab blog will no longer be updated, but you can continue to find new reviews plus the low-down on exhibitions, festivals and other big events on the new CultureLab section. This is all part of streamlining our books and art coverage so we can bring you the most in-depth, thoughtful and up-to-the-minute coverage.

Well, China’s Aircraft Carrier Is Up to Something Interesting by DAVE MAJUMDAR In January 2017, China’s sole carrier Liaoning is operating in the South China Sea with a full-complement of aircraft along with five escorting vessels for the first time. The vessels have been conducting exercises and testing weaponry at sea in a display of Beijing’s growing military might — causing concern among China’s neighbors. “The formation, which is on a ‘cross-sea area’ training exercise, involved J-15 fighter jets, as well as several ship-borne helicopters,” the Chinese Defense Ministry stated on its website. “Complex hydrological and meteorological conditions in the South China Sea as well as a cold front in area have posed some challenges, but the source said the drill provided important experience in the build-up of combat capability of the aircraft carrier formation.”

The Awl - Be Less Stupid Thank you for stopping in at The Awl, a New York City-based web concern established in early 2009. The Awl intends to encourage a daily discussion of the issues of the day—news, politics, culture (and TV!)—during sensible hours of the working week. aCurator Marc Yankus is a photographer and graphic artist. In his latest body of work, "The Space Between," he presents New York's architecture in an imaginary, yet hyper-real way. Marc sees things differently; we talked about him having almost synesthesic moments as he walks around New York. His photographs are a result of his vision and precise post-production, and invoke a nostalgia that on the whole, New York has no time for (though I believe the new mayor is being lobbied to create a listed buildings register for those over 75 years old.)