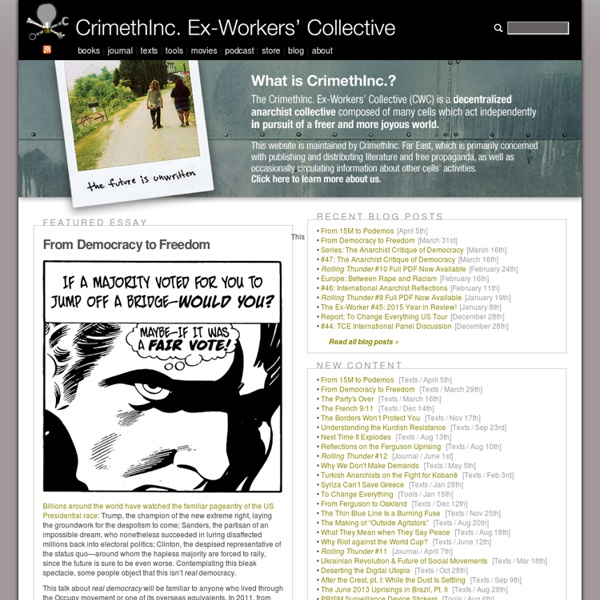 We have heard terrifying stories from the revolution in Ukraine: anarchists participating in anti-government street-fighting behind nationalist banners, anarchist slogans and historical figures appropriated by fascists… a dystopia in which familiar movements and strategies reappear with our enemies at the helm. This text is a clumsy first attempt to identify the important questions for anarchists elsewhere around the world to discuss in the wake of the events in Ukraine. We present it humbly, acknowledging that our information is limited, hoping that others will correct our errors and improve on our analysis. It has been difficult to maintain contact with comrades in the thick of things; surely it is frustrating to be peppered with ill-informed questions amid the tragedies of civil war. What is happening in Ukraine and Venezuela appears to be a reactionary counterattack within the space of social movements.

Peaceful protest is much more effective than violence for toppling dictators Political scientist Erica Chenoweth used to believe, as many do, that violence is the most reliable way to get rid of a dictator. History is filled, after all, with coups, rebellions and civil wars. She didn't take public protests or other forms of peaceful resistance very seriously; how could they possible upend a powerful, authoritarian regime? A Brief History Of Media Cover-Ups & Self-Censorship: Who’s Afraid of Russ Baker’s “Family Of Secrets” - By Matt Harvey On February 17, 1967, the newspapers ran stories about a sensational new investigation into JFK’s assassination, headed by a New Orleans DA named Jim Garrison, who called into question the “lone gunman” theory laying all the blame on Lee Harvey Oswald. Five days after the news story broke, the prime target of Garrison’s investigation, David Ferrie, a right-wing pilot linked to the CIA, was found dead of a “cerebral hemorrhage.” Public opinion was polarized over JFK’s assassination.

10 Groups That Don’t Flinch Under Fire (And, Thus, Deserve Your Support) Here at CounterPunch we get lots of calls from readers this time of year asking: where are the good groups? Where can I send a year-end check and know that the money will be well spent, not recycled into a fat executive salary or an annoying direct mail campaign? There are many such groups out there; indeed, there is a vibrant and thriving grassroots movement across a whole range of issues. Unfortunately, we can’t bring all of them to your attention. But once or twice a year we devote the pages of CounterPunch to a survey of what these organizations are up to. Here’s our end of the year list of good groups. Deprogram: Episode 28 - UNICORN RIOT Ep. 28: #Mizzou #ConcernedStudent1950 #BlackOnCampus #ClimateChange #KeystoneXL #Enbridge #Hackers #CWA #Anonymous #Securus #PrisonMonitoring #MMM2015 #CopsLie #BlackLivesMatter #Turkey #Silvan #SilvanUnderAttack #Palestine #Justice4KeithLamar #ConcernedStudent1950 For episode 28 of Deprogram we start at the University of Missouri, where a hunger strike to combat the systemic racial injustices on campus forced Mizzou president to step down. #ClimateChange We then bring you some climate news; the KeystoneXL pipeline was rejected but Enbridge have pipelines that have been built that move just as much oil, while Earth’s temperature continues to rise. Cyber News

Online Articles Parties recover from defeat in two ways. They can try to beat the opposition at their own game, or they can try to change the rules of the game. Donald Trump did the latter. Now it’s the Democrats’ turn. The Moral Imperative Of Activism Today’s crises – endless war, environmental catastrophe, desperate poverty and more – can seem so daunting that they paralyze action rather than inspire activism. But the imperative to do something in the face of injustice defines one’s moral place in the universe, as ex-CIA analyst Ray McGovern explains. That America is in deep moral and legal trouble was pretty much obvious to everyone before Edward Snowden released official documents showing the extent to which the U.S. government has been playing fast and loose with the Fourth Amendment rights of Americans to be protected against unreasonable searches and seizures. Snowden’s revelations – as explosive as they are – were, in one sense, merely the latest challenge to those of us who took a solemn oath to support and defend the Constitution of the United States against all enemies foreign and domestic.

Well, China’s Aircraft Carrier Is Up to Something Interesting by DAVE MAJUMDAR In January 2017, China’s sole carrier Liaoning is operating in the South China Sea with a full-complement of aircraft along with five escorting vessels for the first time. The vessels have been conducting exercises and testing weaponry at sea in a display of Beijing’s growing military might — causing concern among China’s neighbors. “The formation, which is on a ‘cross-sea area’ training exercise, involved J-15 fighter jets, as well as several ship-borne helicopters,” the Chinese Defense Ministry stated on its website. “Complex hydrological and meteorological conditions in the South China Sea as well as a cold front in area have posed some challenges, but the source said the drill provided important experience in the build-up of combat capability of the aircraft carrier formation.”

Your Guide to the Sprawling New Anti-Trump Resistance Movement The election of Donald Trump was a catastrophe for progressive America, but the damage may be mitigated over the long term by a remarkable surge of energy on the left in response to his election. As many as 5.2 million people participated in hastily organized Women’s Marches across the country, senators’ phones have reportedly been jammed with calls protesting Trump’s cabinet nominees and other early moves, and, according to a poll conducted by The Washington Post, more than one in three Democrats say they plan to become “more involved in the political process in the next year” as a result of the election. That’s true of 40 percent of Democratic women, and almost half of self-identified liberal Democrats.

The Spy Who Billed Me Seymour Hersh was likely counting on his reputation cutting through any obstacles that could prevent him from pulling off what is probably the last “blockbuster” of his career. And he did meet an obstacle: He is pretending to break a broken story—and he knows it. Tuesday evening on Democracy Now! Hersh tried to slide by my allegations of unethical behavior.[1] Hersh commented: … people were writing stories accusing me a [sic] plagiarism in the press in the last two days. The Trump administration really doesn’t want this climate lawsuit to go to trial The Trump administration, joined by fossil fuel companies, is stepping up its fight against a historic federal climate lawsuit, seeking an appeal of a November decision that allowed the case to move forward to trial. The Trump administration also argued that an earlier request — which asked the government to retain records of communication about climate change between the government and the fossil fuel industry — was overly burdensome. “This request for appeal is an attempt to cover up the federal government’s long-running collusion with the fossil fuel industry,” Alex Loznak, a 20-year old plaintiff in the case, said in a statement.