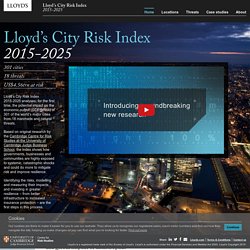 Humans harm themselves: Nearly half of the Total GDP@Risk is linked to Manmade threats, including Market crash, Cyber attack, Power outage and Nuclear accident. Cities with high asset values are the most financially exposed in absolute terms: Taipei, Tokyo, Seoul, New York, Hong Kong, Shanghai and London, have significant levels of economic exposure to catastrophic events.

The true cost of globalisation: In an increasingly interconnected and technologically dependent world, four Emerging threats – Cyber attack, Human pandemic, Plant epidemic and Solar storm – account for more than one fifth of the Total GDP@Risk. Market crash puts the most GDP@Risk globally: It represents nearly a quarter of all cities’ potential losses. Emerging economies have the most to lose: Lloyd’s City Risk Index 2015-2025 shows that, collectively, 71.47% of the Total GDP@Risk is carried by cities in emerging economies. World Risk Index Report & Interactive Map. Risk levels are easily decoded using our simplified color indicator, with blue representing countries with lower overall risk and red representing countries with higher levels of overall risk. 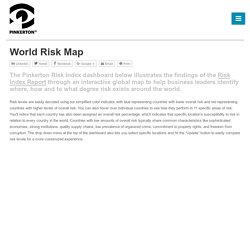 You can also hover over individual countries to see how they perform in 11 specific areas of risk. You’ll notice that each country has also been assigned an overall risk percentage, which indicates that specific location’s susceptibility to risk in relation to every country in the world. Countries with low amounts of overall risk typically share common characteristics like sophisticated economies, strong institutions, quality supply chains, low prevalence of organized crime, commitment to property rights, and freedom from corruption.

Download the Report &amp; Data. 16411. Global Competitiveness Index. CIPS Risk Index - The Chartered Institute of Procurement and Supply. How do the colours on the Country Heatmap correspond to the Country Reports? 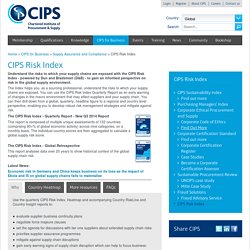 The colour coding relates to D&B country scores which are divided into seven bands ranging from DB1 (lowest risk) to DB7 (highest risk). Each band is subdivided into quartiles (a-d) with an ‘a’ designation representing slightly less risk than a ‘b’ and so on. Only the DB7 score is not divided into quartiles. Supply Chain Management - The Resilience Index - FM Global. Supply chain risk is one of the leading causes of business volatility. 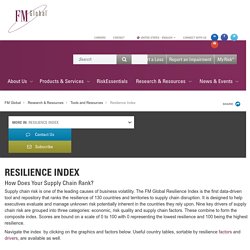 The FM Global Resilience Index is the first data-driven tool and repository that ranks the resilience of 130 countries and territories to supply chain disruption. It is designed to help executives evaluate and manage unknown risk potentially inherent in the countries they rely upon. Nine key drivers of supply chain risk are grouped into three categories: economic, risk quality and supply chain factors. Index of Economic Freedom: Promoting Economic Opportunity and Prosperity by Country. Research - CPI - Overview.

Strategic IT. 2014 Ranking: 1 Offshoring to India remains a highly attractive proposition for many companies, and it is the undisputed industry leader. 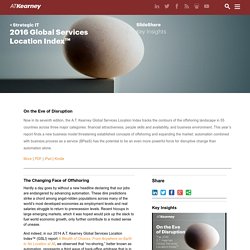 Consider, for example, that no fewer than five Chinese handset manufacturers have announced plans to establish R&D centers in India, which is expected to become the world’s second largest buyer of handsets. 2014 Ranking: 2 China is closing in on India, thanks to major gains in educational skills and cultural adaptability. Additionally, the renminbi’s recent drop in value against the U.S. dollar should increase the country’s financial attractiveness. 2014 Ranking: 3 Malaysia holds steady in the ranking, thanks to minor improvements in IP security and compensation costs that give the country a leg up over Brazil. 2014 Ranking: 8 The value of the Brazilian real has slipped from an average exchange rate against the U.S. dollar of 1.95 in 2012 to 2.35 in 2014, reaching 3.50 in August 2015. 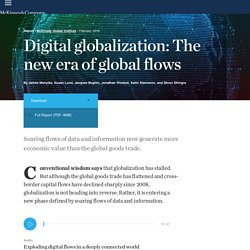 Conventional wisdom says that globalization has stalled. But although the global goods trade has flattened and cross-border capital flows have declined sharply since 2008, globalization is not heading into reverse. Rather, it is entering a new phase defined by soaring flows of data and information. Audio Remarkably, digital flows—which were practically nonexistent just 15 years ago—now exert a larger impact on GDP growth than the centuries-old trade in goods, according to a new McKinsey Global Institute (MGI) report, Digital globalization: The new era of global flows. 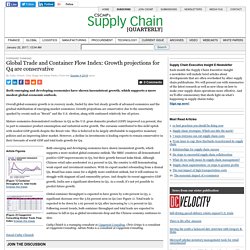 Overall global economic growth is in recovery mode, fueled by slow but steady growth of advanced economies and the gradual stabilization of emerging-market economies. Growth projections are conservative due to the uncertainty sparked by events such as "Brexit" and the U.S. election, along with continued relatively low oil prices.

Mature economies demonstrated resilience in Q3 as the U.S. gross domestic product (GDP) improved 0.9 percent, due in part to consumer product consumption and industrial sector growth. Both emerging and developing economies have shown inconsistent growth, which supports a more modest global economic outlook. Cathy Chinich is a managing consultant at Capgemini Consulting. Email Cathy Chinich Cathy.Chinich at capgemini.com. Export credits. Last Updated: 21 August 2014 The country risk classifications of the Participants to the Arrangement on Officially Supported Export Credits (the "Arrangement") are one of the most fundamental building blocks of the Arrangement rules on minimum premium rates for credit risk. 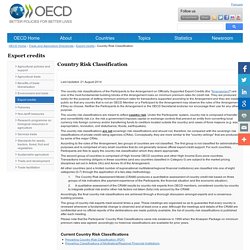 They are produced solely for the purpose of setting minimum premium rates for transactions supported according to the Arrangement and they are made public so that any country that is not an OECD Member or a Participant to the Arrangement may observe the rules of the Arrangement if they so choose. Business Cycle Indicators. Global Business Cycle Indicators The Conference Board publishes leading, coincident, and lagging indexes designed to signal peaks and troughs in the business cycle for major economies around the world. 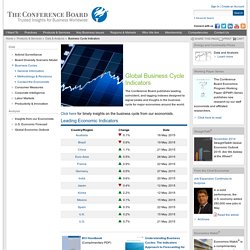 Click here for timely insights on the business cycle from our economists. Leading Economic Indicators Purchase Options *Prices are subject to change annually **Subscribers are not allowed to post/publish publicly or redistribute databases to any 3rd parties. China’s Supply-Chain Scramble Now Comes With Added Commodities – Supplychains Magazine. Click here to view original web page at www.bloomberg.com Early this month a deal was struck for a mine on the outskirts of the Congolese jungle. 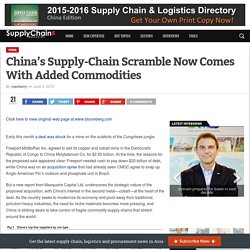 Freeport-McMoRan Inc. agreed to sell its copper and cobalt mine in the Democratic Republic of Congo to China Molybdenum Co. for $2.65 billion. At the time, the reasons for the proposed sale appeared clear: Freeport needed cash to pay down $20 billion of debt, while China was on an acquisition spree that had already seen CMOC agree to snap up Anglo American Plc’s niobium and phosphate unit in Brazil. Energy Trilemma Index. The Energy Sustainability Index ranks countries in terms of their likely ability to provide sustainable energy policies through the 3 dimensions of the energy trilemma:

Yet if half of the world’s talent is not integrated—as both beneficiary and shaper—into the transformations underway, we will compromise innovation and risk a rise in inequality. This urgency is at the core of a fresh call to action to accelerate progress towards gender equality, adding to the well-established economic case for gender equality. Moreover, there is a fundamental moral case for empowering women: women represent one half of the global population and it is self-evident that they must have equal access to health, education, earning power and political representation.

Human Development Index (HDI) The HDI was created to emphasize that people and their capabilities should be the ultimate criteria for assessing the development of a country, not economic growth alone. The HDI can also be used to question national policy choices, asking how two countries with the same level of GNI per capita can end up with different human development outcomes. These contrasts can stimulate debate about government policy priorities.