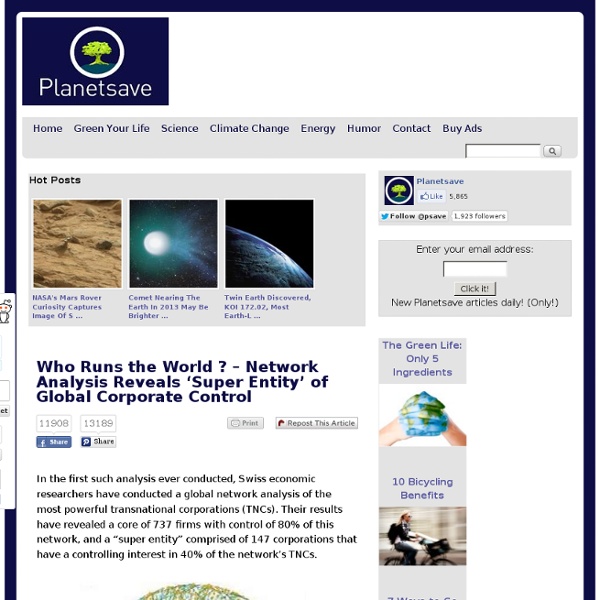 Business Published on August 28th, 2011 | by Michael Ricciardi In the first such analysis ever conducted, Swiss economic researchers have conducted a global network analysis of the most powerful transnational corporations (TNCs). Their results have revealed a core of 737 firms with control of 80% of this network, and a “super entity” comprised of 147 corporations that have a controlling interest in 40% of the network’s TNCs. Strongly Connected Component (SCC); layout of the SCC (1318 nodes and 12,191 links). [Note to the reader: see the very end of this article for a ranking of the top 50 'control holders'] When we hear conspiracy theorist talk about this or that powerful group (or alliance of said groups) “pulling strings” behind the scenes, we tend to dismiss or minimize such claims, even though, deep down, we may suspect that there’s some degree of truth to it, however distorted by the theorists’ slightly paranoid perception of the world. Two generalized characteristics were identified: Related:  gabalini

German Defence League © The Covert Origins of World War III – US Special Operations Forces To Be Deployed In 120 Countries By Nick Turse Somewhere on this planet an American commando is carrying out a mission. Now, say that 70 times and you’re done… for the day. Without the knowledge of the American public, a secret force within the U.S. military is undertaking operations in a majority of the world’s countries. This new Pentagon power elite is waging a global war whose size and scope has never been revealed, until now. After a U.S. Last year, Karen DeYoung and Greg Jaffe of the Washington Post reported that U.S. The Rise of the Military’s Secret Military Born of a failed 1980 raid to rescue American hostages in Iran, in which eight U.S. service members died, U.S. One of its key components is the Joint Special Operations Command, or JSOC, a clandestine sub-command whose primary mission is tracking and killing suspected terrorists. Growth Industry While Olson made reference to only 51 countries of top concern to SOCOM, Col. Special Operations Command won’t disclose exactly which countries its forces operate in.

Powerful weather conditions photography {Part 2} Posted on September 27, 2011 in Photography If you’re new here, you may want to subscribe to our RSS feed or follow us on Facebook or Twitter . Thanks for visiting! Rate this Post Loading ... So... Check this out on our Partner Network Open Letter to that 53% Guy In the picture, you’re holding up a sheet of paper that says: I am a former Marine. I work two jobs. I don’t have health insurance. I wanted to respond to you as a liberal. First, let me say that I think it’s great that you have such a strong work ethic and I agree with you that you have much to be proud of. I have a nephew in the Marine Corps, so I have some idea of how tough that can be. So, if you think being a liberal means that I don’t value hard work or a strong work ethic, you’re wrong. I understand your pride in what you’ve accomplished, but I want to ask you something. Do you really want the bar set this high? Do you really want to spend the rest of your life working two jobs and 60 to 70 hours a week? And what happens if you get sick? Do you plan to get married, have kids? Look, you’re a tough kid. And, believe it or not, there are people out there even tougher than you. And is this really your idea of what life should be like in the greatest country on Earth?

China’s WTO membership is a farce The following article originally appeared on Youngstown News. Ohio businesses, we were told, would gain new access to Chinese markets through the removal of trade barriers, increased transparency, and more stringent protection of intellectual property rights. China promised to follow the rule of law and to reform its legal system, and, in turn, would gain new access to global markets. Ten years later, Ohio workers have seen thousands of jobs shipped to China — factories in Ohio have moved to Wuhan and Shenzhen, with the final products sold back to the U.S. American manufacturers have been undermined by a flood of cheap Chinese imports priced artificially low. The big winner? Gaming the system And while Ohio companies and workers are following World Trade Organization rules — intended to provide a common set of law to ensure a level playing field for global trade — the Chinese are gaming the system. The list of China’s WTO violations is long. Why? Unfair subsidy

Big Brother knows all about my bunion op - and the fish pie I ate after it: How one woman found out about the intimate information held about her By Claudia Joseph Updated: 14:42 GMT, 14 August 2011 It was a perfectly ordinary summer’s day. On July 29 last year, Angela Lay, a performance management officer at Maldon Council in Essex, got up early and drove the two-and- a-half miles from her home in Heybridge Basin to go shopping in Maldon. She left Tesco at 6.03am, having spent £126.80 on food and earned 60 points on her reward card, returned home and unloaded the silver Renault Megane diesel car she had bought four years earlier. She then caught the train from Witham to London, paying £23 for her ticket from London Eastern. By 12.04pm she was in Covent Garden, where she withdrew £30 from HSBC, money from the widow’s pension paid that day into her bank account. Information overload: Databases contain a staggering amount of detail about Angela Lay's life Afterwards she went shopping, spending £73.95 at H&M in Regent Street and £48.60 at Hamleys. She got a second pair free on a special offer. Or, worse, stolen.

Plitvice Lakes National Park, Croatia The stunning Plitvice Lakes National Park lies in the Lika region of Croatia. The park is surrounded by the mountains Plješevica, Mala Kapela, and Medveđak, which are part of the Dinaric Alps. The 16 blue-green Plitvice Lakes, which are separated by natural dams of travertine, are situated on the Plitvice plateau. Waterfalls connect the lakes, and the tallest waterfall is Veliki Slap at 70 meters (230 feet) tall. The Plitvice lakes area boasts a large variety of interesting and colorful flora and fauna.

CHARTS: Here's What The Wall Street Protesters Are So Angry About... The "Occupy Wall Street" protests are gaining momentum, having spread from a small park in New York to marches to other cities across the country. So far, the protests seem fueled by a collective sense that things in our economy are not fair or right. But the protesters have not done a good job of focusing their complaints—and thus have been skewered as malcontents who don't know what they stand for or want. (An early list of "grievances" included some legitimate beefs, but was otherwise just a vague attack on "corporations." Given that these are the same corporations that employ more than 100 million Americans and make the products we all use every day, this broadside did not resonate with most Americans). So, what are the protesters so upset about, really? Do they have legitimate gripes? To answer the latter question first, yes, they have very legitimate gripes.

The Currency Myth: “Money Makes The World Go Round” Money is everywhere isn’t it? We use it daily, we buy our goods and necessities with it. If we are working, we are making it daily. For most of us not a day goes by where we are in some way using money or thinking about money. That’s all natural of course as it has been such a huge part of our society for a long time. The way we are brought up to understand the financial system is that it is controlled and printed by our national governments and that it is backed by gold in reserves. “Most Americans have no real understanding of the operation of the international money lenders. The paradox behind these institutions and our monetary system is that the money that’s being printed is only lended to our governments. In order to pay back this interest they have created what they call “fiscal policy.” government expenditure and revenue collection. “Neither paper currency nor deposits have value as commodities, intrinsically, a ‘dollar” bill is just a piece of paper.

Project Avalon - Klaus Dona: The Hidden History of the Human Race Click here for the PDF version of this interview (20 pages) Click here for the video presentation March 2010 **Ed note: Some transcripts contain words or phrases that are inaudible or difficult to hear and are, therefore, designated in square brackets BILL RYAN (BR): This is Bill Ryan here from Project Camelot and Project Avalon. Klaus is going to be doing an audio commentary on one of his extremely special, unusual, and fascinating slide shows about the artifacts and the various phenomena that he has been researching, discovering, investigating personally all over the world relating to what I think you could legitimately call The Hidden History of the Human Race. KLAUS DONA (KD): That's a very good summary, yes. BR: [laughs] So I'm going to step back here, and what follows now, just kick back and enjoy this slide presentation. What are we looking at here ? Ancient World Maps Ecuador Even the next one, [right, above] you can see how this statue is sitting. Bolivia Colombia Guinea, West Africa