7 Theories on Time That Would Make Doc Brown's Head Explode 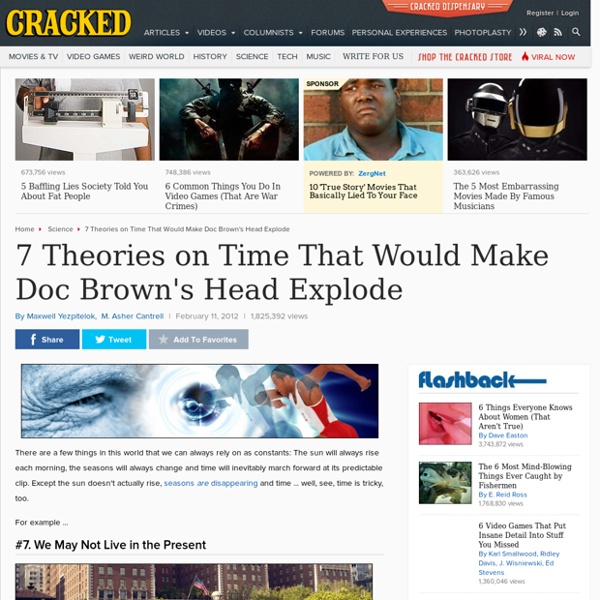 There are a few things in this world that we can always rely on as constants: The sun will always rise each morning, the seasons will always change and time will inevitably march forward at its predictable clip. Except the sun doesn't actually rise, seasons are disappearing and time ... well, see, time is tricky, too. For example ... #7. We May Not Live in the Present What if we told you that what you think of as "the present" is actually slightly in the past? The delay isn't much -- what's 80 milliseconds between you and your brain? Photos.com"Being a brain is kind of boring, but we've got lots of time for pranks." But that's not the freaky part. Photos.com"You really don't want to see the copies." Not convinced? The bizarre real-world implication is that the taller you are, the further back you live in the past, since it takes longer for the information to travel through your body -- and if you're a little person, you live closer to the present. #6. Photos.com"Finally! #5. #4. Related:  Tempus Fugit

Virginia Woolf on the Elasticity of Time Long before psychologists had any insight into our warped perception of time — for instance, why it slows down when we’re afraid, speeds up as we age, and gets twisted when we vacation — or understood how our mental time travel made us human, another great investigator of the human psyche captured the extraordinary elasticity of time not in science but in art. In Orlando: A Biography (public library) — her subversive 1928 masterwork, regarded as “the longest and most charming love letter in literature,” which also gave us her insight into the dance of self-doubt in creative work — Virginia Woolf (January 25, 1882–March 28, 1941) writes: Time, unfortunately, though it makes animals and vegetables bloom and fade with amazing punctuality, has no such simple effect upon the mind of man. The mind of man, moreover, works with equal strangeness upon the body of time. Life piles up so fast that I have no time to write out the equally fast rising mound of reflections.

10 Animals You Won't Believe Are Closely Related Thanks to the know-it-all from second grade, we're all aware that dolphins and whales are mammals, not fish. But it's probably been a while since you've pondered just how incredibly, mind-blowingly weird it is that you and whales were the same animal more recently than whales and sharks. Or to put it in chart form, you and whales split up somewhere in the big tangle of bio diversity up top labeled "Age of Mammals" while whales and fish haven't been the same animals since way the hell down ... ... here where you see the word Selacchi. So how is it that our evolutionary cousins ended up with flippers and fins exactly where fish have them and we ended up needing swimming lessons? Courtesy of Getty Images." Turns out it's the same reason birds and bats both ended up flying around on wings: convergent evolution, the smarmy term for when completely unrelated species develop similar traits. Image By Glen Fergus What it looks like: You don't need your wife standing next to you screaming, "MOUSE!

National Coalition Against Censorship -- NCAC Clocks Metric (or Decimalized) Time The day is divided into 100 parts (centidays), plus decimal fraction. Think of it as a percent of the day. The "Universal Metric Time" is based on the International Date Line. Much more information at my Guide to Metric (or Decimilized) Time. Hexadecimal Time The day is divided up into 65536 parts and written in hexadecimal (base-16) notation (A=10, B=11 ... Much more information about this can be found at Intuitor Hexadecimal Headquarters. Octal Time Octal Time uses a base-8 system (digits 0-7). Base64 Time Base-64 uses ASCII characters (in ascending order: A-Z, a-z, 0-1, +, and /). Binary Time Like hexadecimal time, the day is divided into 65536 parts, only we display it as a binary number using squares for bits, here using dark squares to represent 1 and white for 0. This can be viewed as a variation of hexadecimal time by dividing it into four 2x2 blocks of squares, each block corresponds to a digit of hexadecimal time. Mayan Time

Anonymous Why England Was A Year Behind Belgium, Spain and Italy for 170 Years William Hogarth's satirical painting, "An Election Entertainment" (1755), includes the words "Give us back our eleven days!" (Photo: Public Domain/WikiCommons) In 1584 a violent, angry crowd ransacked the city of Augsburg, Germany. Citizens broke through thick windows and shot their guns into the street. They were marching to City Hall to make it clear that they would not take the authorities’ new plans sitting down. The people of Augsburg weren’t just upset that their calendar was being changed, which would skip birthdays and ruin weekends. The marketplace in Ausburg, Germany in 1550. In The Reformation in Germany, C. A riot was the only way to go, or so thought some 16th century Augsburgers. The reasons for the calendar change, in an astronomical sense, were less sinister than the people of Augsburg assumed; Aloysius Lilius, the astronomer who proposed the project, was just trying to improve the dating system begun by Julius Caesar.

6 Things From History Everyone Pictures Incorrectly Nobody Dressed How You Think They Dressed The Perception: So already it's pretty clear that if we don't have photos laying around of the historical period in question, we're basically just guessing. And that's interesting considering how many figures from the distant past we think we have a perfectly clear image of. For instance, ninjas looked like this: Vikings looked like this: And as anyone who's ever attended a Thanksgiving event at an American grade school knows, pilgrims looked like this: The Reality: The ninja outfit is ridiculous, if you think about it. Hidden inside those bushels are like a million katanas. On rare occasions when they needed to move through the dark undetected, they still didn't wear black. As for the Vikings, the one single thing we know them for--wearing huge horns on their helmets--isn't true. Viking helmets: built for sensible pillaging. As for the pilgrims, they were simple, farming folk, and as such wore clothes that made sense for the job. Source. Oh hell yeah