VISTA gigapixel mosaic of the central parts of the Milky Way 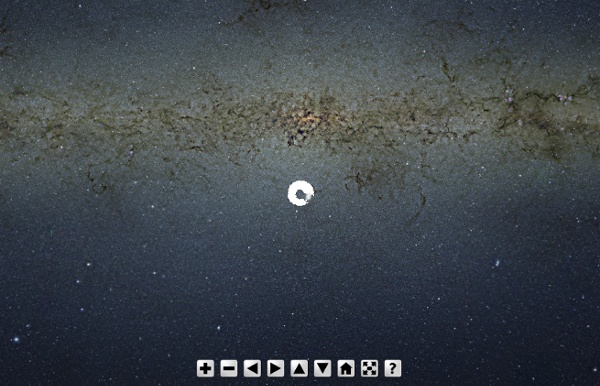 The Massey Experience Welcome to The Massey Experience, an online exploration of the ideas, themes, theories and characters that form Neil Turok's 2012 Massey Lectures The Universe Within: From Quantum to Cosmos. The Massey Experience is an immersive, evolving companion to Neil's Massey Lectures which aired on CBC Radio's IDEAS in November 2012. The story is a journey from quantum to cosmos: where we've come from, where we're going and what we've learned along the way. Neil argues that we're on the cusp of yet another major transformation: a coming quantum revolution that will supplant our current digital age. It's the story of science and technology, but it is also the story of who we are: amazing creative humans.

Moon Phases: 6000 Year Catalog The tables available though the links below give the date and time (Universal Time) of all phases of the Moon for the six thousand year period -1999 to +4000 (2000 BCE to 4000 CE). This data is provided primarily to assist in historical research projects. For the year 2000, the length of the mean synodic month (New Moon to New Moon) is 29.530588 days (=29d12h44m03s). Across Our Blogs: Mars Curiosity Rover Moonrise, New Rover, Billion Pixel Marsscape Seems the Mars Curiosity Rover has been a busy little six-wheeled fellow these past few weeks. Here's a roundup of news related to the rover, from top Technorati listed science blogs... From ArsTechnica - Curiosity rover shoots video of Martian moonrise - NASA released a time-lapse video of the Martian moon Phobos, as it ascends into view. From GizMag - Curiosity begins long trek to uncover Red Planet's secrets - the rover has begun a multi-month journey to Mount Sharp, where it will dig in to find signs of past life. During its travel time, it will likely celebrate it's first year anniversary of being on the red planet's surface. From The Huffington Post - Mars Water?

Future - Science & Environment - Drake equation: How many alien civilizations exist? Are we alone? It is a question that has occupied mankind for centuries. Today, we live in an age of exploration, where robots on Mars and planet-hunting telescopes are beginning to allow us to edge closer to an answer. While we wait to establish contact, one technique we can use back on Earth is an equation that American astronomer Frank Drake formulated in the 1960s to calculate the number of detectable extraterrestrial civilizations may exist in the Milky Way galaxy. It is not a rigorous equation, offering a wide range of possible answers. Instead it is more a tool used to help understand how many worlds might be out there and how those estimates change as missions like Kepler, a telescope that is currently searching for Earth-like planets, begin to discover more about our universe.

Earth Has Less Water Than You Think Want to stay on top of all the space news? Follow @universetoday on Twitter All the water on Earth would fit into a sphere 860 miles (1,385 km) wide. (Jack Cook/WHOI/USGS) If you were to take all of the water on Earth — all of the fresh water, sea water, ground water, water vapor and water inside our bodies — take all of it and somehow collect it into a single, giant sphere of liquid, how big do you think it would be? collect space space history and space artifacts news Long before the first Instagram from space, the first check-in from orbit, or even the first astronaut's tweet, John Glenn sent an email to Bill Clinton. The reply it prompted was the very first email transmitted by a sitting U.S. president — it just happened to be to space. April 18, 2014SpaceX launches science-packed Dragon capsule on space station supply run A commercial cargo spacecraft loaded with more than two tons of scientific experiments and equipment lifted off for the International Space Station on April 18, after more than a month of delays.

Frequently Asked Questions in Cosmology Tutorial : Part 1 | Part 2 | Part 3 | Part 4 | Age | Distances | Bibliography | Relativity What is the currently most accepted model for the Universe? The current best fit model is a flat ΛCDM Big Bang model where the expansion of the Universe is accelerating, and the age of the Universe is 13.7 billion years. Back to top. What is the evidence for the Big Bang? Your ‘Supermoon’ Images from Around the World Want to stay on top of all the space news? Follow @universetoday on Twitter San Souci lighthouse and the perigee Moon, in the Dominican Republic. Credit: Goku Abreu. We asked for ‘em, and you sent ‘em in: here are great images of the perigee Moon on May 5, 2012, the largest full Moon of the year taken by our readers.

The Mystery of Venus’ Ashen Light Want to stay on top of all the space news? Follow @universetoday on Twitter Venus imaged by Magellan Image Credit: NASA/JPL May is the best time to try and spot one of the most enduring unsolved mysteries in our Solar System. Ashen Light is a faint glow allegedly seen on the unlit portion of Venus, during its crescent phase, similar to the earthshine often observed on the Moon, though not as bright. It is more commonly observed while Venus occupies the evening sky, as now, than when it is in the morning sky.

Beyond 2012: Why the World Didn't End Beyond 2012: Why the World Didn't End If you're reading this story, it means the world didn't end on Dec. 21, 2012. Despite reports of an ancient Maya prophecy, a mysterious planet on a collision course with Earth, or a reverse in Earth's rotation, we're still here. The Mayan connection "was a misconception from the very beginning," says Dr. John Carlson, director of the Center for Archaeoastronomy. Cassini Exposes Phoebe As More Planet Than Moon Want to stay on top of all the space news? Follow @universetoday on Twitter Color-composite image of Phoebe as seen by Cassini in 2004. Saturn’s curious moon Phoebe features a heavily-cratered shape and orbits the ringed planet backwards at a considerable distance of over 8 million miles (12.8 million km).