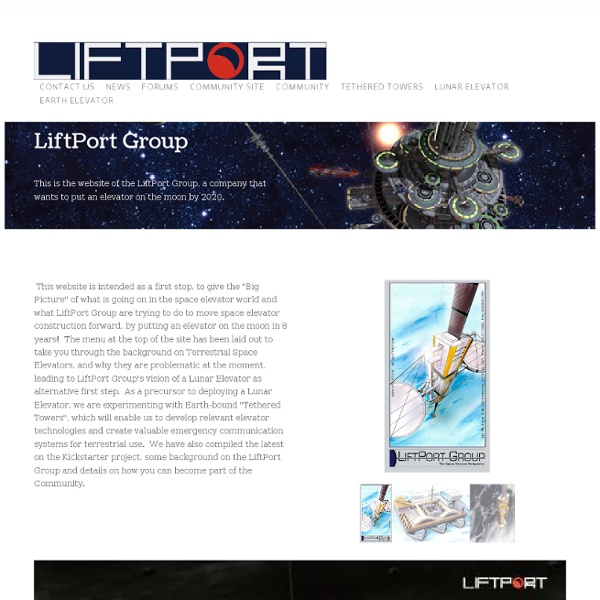 LiftPort plans to build space elevator on the Moon by 2020 When the late Neil Armstrong and the crew of Apollo 11 went to the Moon, they did so sitting atop a rocket the size of a skyscraper that blasted out jets of smoke and flame as it hurtled skyward. For over half a century, that is how all astronauts have gone into space. It’s all very dramatic, but it’s also expensive. Wouldn’t it be cheaper and easier to take the elevator? That’s the question that Michael Laine, CEO of LiftPort in Seattle, Washington, hopes to answer with the development of a transportation system that swaps space-rockets for space-ribbons. View all Rockets have done sterling service in launching satellites and astronauts into orbit. The idea even predates liquid-fueled rockets. For decades, the idea languished and was largely forgotten, until is was reinvented in 1959 by another Russian scientist, Yuri N. By the 1970s, the basic design of a possible future space elevator had been refined. This system doesn’t envision the use of an actual elevator.

Disposable Cameras There are lots of disposable camera Instructables on the site. It was hard to choose, but I've included some great ones! Need a taser, a coil gun, a flash grenade? Well then, this disposable camera guide is for you! From simple everyday parts you can make this glove which has two modes. Mode 1 is a constant output of slightly over 300 v. while Mode 2 takes a few seconds to charge, but gives off a much more painfu... Learn how to make a simple but extremely effective Coil gun using only a "few" parts that are fairly easy to obtain by only going to a few places and possibly online. I've come up with a project that i've been contemplating for a long time. Are you tired of having your Ni-Cad batteries that refused to charge and simply die? Well... Caution I'm not liable if your shock yourself and injury or kill your self, working with high voltages can be dangerous!! Before I get too far in this instructable, I would like to say that this was not my original idea.

Astrophile: Mars coils hold with those who favour fire - space - 26 April 2012 Astrophile is our weekly column on curious cosmic objects, from the solar system to the far reaches of the multiverse Object: Spiral patterns in Martian valleysOrigin: Solidified lava lake Some say Mars's northern valley formed in fire, some say in ice: now curious spirals on the floor of the valley have been glimpsed – and hold with those who favour fire. The Athabasca Valles region, a channelled and scabbed valley just north of the red planet's equator, was clearly carved by floods of fluid coursing through it tens of millions of years ago. Graduate student Andrew Ryan of Arizona State University and colleagues seem to have settled the debate with their discovery of subtle spirals on the valley floor that could only be formed from lava. Athabasca Valles is famous for its large dark plates, which seem to be floating in a network of channels that were probably carved in a flood of liquid water. Ocean of consternation "That caused a lot of consternation," Ryan says. Wrinkled skin

Canada Unveils Next-Generation Robotic Arms for Spaceships The Canadian-built robotic arms built for NASA's space shuttle fleet and the International Space Station are about to get two new siblings. Last week, the Canadian Space Agency showed off the Next-Generation Canadarm (NGC) prototypes, which were unveiled after three years of development at Canadian company MacDonald, Dettwiler and Associates. The mechanical limbs are the successors to the shuttle fleet's Canadarm and station's Canadarm2, which played pivotal rolls in the station's construction for more than a decade. The CSA and MDA plan to use this technology to position Canada for newer space business opportunities in areas such as in-orbit refuelling of satellites, said Gilles Leclerc, the agency's director-general of space exploration. "We prepared all these new systems so that we will be well-positioned for the next thing in space," Leclerc said. Fuelling competition One of the prototype arms spans 49 feet (15 meters), the same length as the space station's Canadarm2. Canadarm's legacy

Researchers claim quantum breakthrough & News in Science (ABC Science) News in Science Thursday, 26 April 2012 Connor Duffy and staffABC Giant leap Researchers say they have designed a tiny crystal that acts like a quantum computer so powerful it would take a computer the size of the known universe to match it. Details of the crystal, which is made up of just 300 atoms, are published today in the journal Nature. "Quantum computing is a kind of information science that is based on the notion that if one performs computations in a fundamentally different way than the way your classical desktop computer works," says study co-author University of Sydney's Dr Michael Biercuk. "There's a huge potential to solve a variety of problems that are very, very hard or near impossible for standard computer." The crystal simulator uses a property of quantum mechanics called superposition, where a quantum particle appears to be in two distinct states at the same time. As the number of qubits increase, the number or states increases exponentially. Outstrips classical computers

X's Reusable 'Grasshopper' Rocket Makes 1st Test Flight It's one small hop for a rocket, but one giant leap for reusable rocket ships: A private rocket prototype has sailed through a 6-foot hop that, while short, marked a major test for a novel reusable launch system being developed by commercial spaceflight company SpaceX. Called "Grasshopper," the rocket lifted off briefly then set back down on four spidery legs during the recent test at SpaceX's proving ground in McGregor, Texas. "The short hop of approximately 6 feet is the first major milestone for Grasshopper, and a critical step toward a reusable first stage for SpaceX’s proven Falcon 9 rocket," SpaceX officials said of the Sept. 21 test. The Grasshopper rocket uses the first stage of SpaceX's successful Falcon 9 rocket, a two-stage booster that stands nearly 227 feet tall (70 meters) and is used to launch the company's Dragon space capsules and other payloads into low-Earth orbit. The Sept. 21 test hop is just the first in a series of flight demonstrations, SpaceX officials said.

Magenta Ain't A Colour A beam of white light is made up of all the colours in the spectrum. The range extends from red through to violet, with orange, yellow, green and blue in between. But there is one colour that is notable by its absence. You should have seen a green afterimage, but why is this significant? The afterimage always shows the colour that is complementary to the colour of the image. Complementary colours are those that are exact opposites in the way the eye perceives them. It is a common misconception that red is complementary to green. All the colours in the light spectrum have complements that exist within the spectrum – except green. The light spectrum consists of a range of wavelengths of electromagnetic radiation. When our eyes see colours, they are actually detecting the different wavelengths of the light hitting the retina. If the eye receives light of more than one wavelength, the colour generated in the brain is formed from the sum of the input responses on the retina. -Biotele