40 Witty Campaign Posters for a Cause 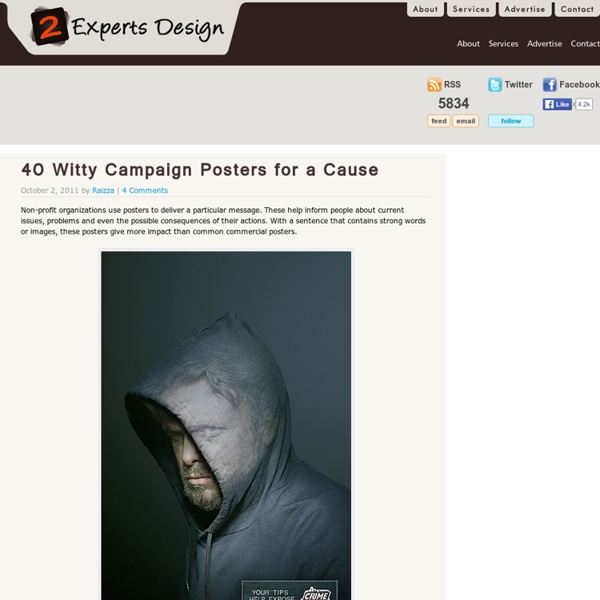 Non-profit organizations use posters to deliver a particular message. These help inform people about current issues, problems and even the possible consequences of their actions. With a sentence that contains strong words or images, these posters give more impact than common commercial posters. To give you an idea, here are 20 sample campaign posters to provoke your imagination. Enjoy! Wildlife is becoming harder to find in Vietnam. Winter. Who are the real monsters? When they speak, we listen. Shit is not a cool band. Say no to child labor. Can you treat yourself better than your doctor? Nothing we do will ever bring them back. Please don’t dive with white sharks. All under 25 who are sexually active should test for Chlamydia every year and avery time they change partner. For some people, life is that expensive. Preparing today reduces the consequences of disaster tomorrow. Two thirds of college students in Mississippi don’t smoke. Please clean up after your dog. One mistake is all it takes.

High school fashions, 1969 Fashion, Vintage High school fashions, 1969 i know what you’re thinking… are these more fashion snaps from coachella? no indeed! these are high school fashions in 1969 photographed by arthur shatz for life magazine. Subscribe to posts via Email 40 Creative Design Layouts: Getting Out Of The Box Advertisement Over the last months we have seen a strong trend towards more individual web designs. These designs use realistic motifs from everyday life, such as hand-drawn elements, script fonts, pins, paper clips, organic textures and scrapbooks.

No, This Is Not Photoshop. A Makeup Artist Created Marge Simpson on a Real Person Posted Apr 11, by Christen Grumstrup In this photo, makeup created the yellow skin color and big eyes. Flowers were used for the hair. Her red lips are actually painted on her neck. Can you tell? This proves it is possible to create a pixelated look using makeup.... in case anyone was wondering. Can motors in wheels spark electric car revolution? There may have been more alluring electric cars on display at this year's Tokyo Motor Show, but the beauty of this prototype lies in its performance. The SIM-LEI can travel 333 kilometers (more than 200 miles) on a single charge, say its Japanese creators SIM Drive, and it also boasts supercar-like acceleration -- 0 to 60 mph in just 4.8 seconds. The key to these remarkable statistics lies not, as you might expect, underneath the hood but in its wheels. Most electric vehicles house a single motor in the area vacated by the petrol engine, but the SIM-LEI has four motors, which fit in the hubs its wheels. Each one delivers 65 kilowatts, giving the car a total output of 260 kilowatts, compared with the 80 kilowatts of output available in, say, the Nissan Leaf.

Creating Seamless Textures In Illustrator I think you’ll all agree that Illustrator is just plain awesome, and with the continual improvements we see with each new version, it keeps getting better and better. Previously, I created seamless textures for typography and seamless backgrounds for my web and illustration projects with Photoshop. But we’ve seen large improvements with the Appearance panel in more recent versions of Illustrator, so now I create these textures and backgrounds solely in Illustrator–it’s actually super easy! So in today’s tutorial, I’ll walk you through the steps on how to create a variety of seamless textures and backgrounds all in Adobe Illustrator. Tutorial Details: Seamless Textures and Seamless Backgrounds

Grime-fighting garments aim to purify air Polymer chemist Tony Ryan and fashion designer Helen Storey have joined forces to create clothing which can purify the air. Catalytic Clothing contains the same nanotechnology found in self-cleaning paints and glasses but applies it to clothes via a special fabric conditioner. A catalyst -- titanium dioxide -- applied during a normal home washing cycle breaks down harmful airborne pollutants when exposed to ultraviolet light. Ryan discovered that treated jeans were particularly good at absorbing pollution. Although only small amounts of pollution -- around two grams per 500-gram pair of jeans -- is removed from the air, Ryan and Storey say if the technology was worn widely then city pollution could be reduced. A short film featuring British model Erin O'Connor and music by rock group Radiohead was released in 2011 to promote the idea to the public.

15 websites offering free stock photos We present to you a list of 15 best free stock photos sites . Some of these sites sell photos and along with paid offer free stock photos. Such photos usually have Royalty Free license and called royalty free images . It means that you can download these photos free of charge but you can not sell or distribute them in any way.

50 Ideas for the New City The Omnibus is all about ideas. From the beginning, Urban Omnibus has been a showcase of good ideas for the future of cities, conceived in the public interest and tried and tested in the five boroughs of New York. So, we have decided to surface some of the ideas that have appeared on Urban Omnibus over the past two years and broadcast them around the city. In April 2011, we released a series of Idea Posters, pasted on fences, scaffolds and storefronts from Jamaica, Queens, to the Upper West Side of Manhattan, and many places in between. With this poster campaign, we wanted to turn the tactics of ubiquitous marketing — in which every bus, taxi or construction barrier is a canvas for advertising anything and everything — upside down by using a similar language to share examples of creativity and innovation in the urban realm. We want to spread these ideas to the whole city, online and off.

20 Beautiful Fonts for Big and Effective Headlines Typography is one of the most important design element. Design with good typography looks better and is easier to read or scan the content. Headlines are important typography design element. Stuff: When Less Is More Today we use far fewer materials than we once did to get the same things done—a phenomenon known as “dematerialization.” But, paradoxically, this efficiency seems to drive up overall consumption. In Making the Modern World: Materials and Dematerialization, a deeply researched statistical profile of global material use, author Vaclav Smil lays out just how much stuff we need to live modern lives. We Make More with Less… Material intensity continues to fall dramatically. In the U.S., the amount of resources extracted per dollar of GDP has decreased by nearly 75% over the past 90 years.

Reclaimed wood headboard - Queen The free content provicded by this website is made possible by the following current sponsors. Thank you! Design Seeds®: For All Who Love Color #d9e8c3 #ced181 #7c8f50 #555e32 #bf867c #d4b9b9 External Tip - 10 Advanced Photoshop Tutorials You Should See In this category we want to give you an advice to other great sites, where you can get a lot of very useful information, inspirations and materials. Here I collected 10 great Photoshop tutorials, which can help you to expand your skills. Create a Devastating Tidal Wave in Photoshop Create Quick Particle Effect on Photo via Custom Brush Options in Photoshop Create a Surreal Upside Down Mountain Painting in Photoshop Business Man – Awesome Black & White Tutorial