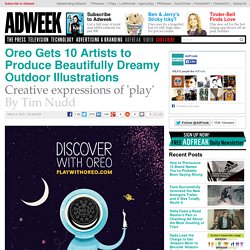 The artists were given words to play off—functional ones like "dunk" and "twist," as well as more emotional ones like "dream" and "wonder"—and asked to come up with a scene that brings those words to life. The only requirement was that the scene include a character with the Oreo cookie wafer as the face/head. The ads will run outdoors in New York City, Los Angeles and Indianapolis and shared through Oreo social channels starting this week. The featured artists are Shotopop, Jeff Soto, Ryan Todd, McBess, Andrew Bannecker, Geoff McFetridge, Andy Rementer, Alex Trochut, Craig and Karl and Brosmind.

Why Led Zeppelin, Billy Joel and Dylan Now Readily Sell Their Songs to Brands. When Led Zeppelin licensed “Rock and Roll” to Cadillac for its “Break Through” spot in 2002, it was a huge coup for the carmaker, as the band had never let a marketer use one of its songs before. 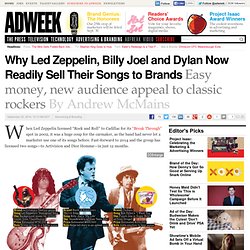 Fast-forward to 2014 and the group has licensed two songs—to Activision and Dior Homme—in just 12 months. Online Visibility: The Quadcopter Theorem. It’s cliché to state at this point, but just about everything you encounter throughout the day is a form of advertising. 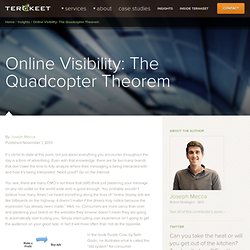 Even with that knowledge, there are far too many brands that don’t take the time to fully analyze where their messaging is being interacted with and how it’s being interpreted. Need proof? Go on the internet. Macala Wright: Why Mad Men Are Becoming Math Men. In our digital worlds, it is safe to say that advertising is becoming more dynamic and complicated than ever. 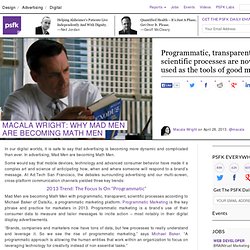 In advertising, Mad Men are becoming Math Men. Some would say that mobile devices, technology and advanced consumer behavior have made it a complex art and science of anticipating how, when and where someone will respond to a brand’s message. At Ad:Tech San Francisco, the debates surrounding advertising and our multi-screen, cross-platform communication channels yielded three key trends: 2013 Trend: The Focus Is On “Programmatic” Mad Men are becoming Math Men with programmatic, transparent, scientific processes according to Michael Baker of DataXu, a programmatic marketing platform. 3D-Printed Clothing Hits Paris Fashion Week. We’ve seen a few instances over the years of high technology colliding with high fashion, but maybe never in a way as direct and striking as this. 3D printing has come to the world of fashion, and the latest example of this collaboration is the Voltage collection, which is currently being showcased at Paris Fashion Week. 3D printing refers to a very new way of creating goods – a model is designed using a CAD program, which is then sent to a 3D printer. 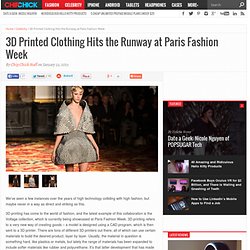 There are tons of different 3D printers out there, all of which can use certain materials to build the desired product, layer by layer. Usually, the material in question is something hard, like plastics or metals, but lately the range of materials has been expanded to include softer materials like rubber and polyurethane. It’s that latter development that has made 3D printed fashion a possibility. Press Release. The 10 Most Creative College Commercials. 2011 4A's Jay Chiat Awards for Strategic Excellence Winners Announced at Strategy Festival. Brilliant planning ought to be celebrated and the 4A’s did so with its presentation of the 2011 Jay Chiat Awards for Strategic Excellence at the Strategy Festival in New York City on Thursday, October 13. 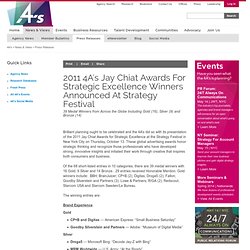 Following a year of exhaustive audience research and a cavalcade of brand consultants, VH1 is now feverishly commissioning a host of new shows in a wide variety of genres that will roll out over the next few months. 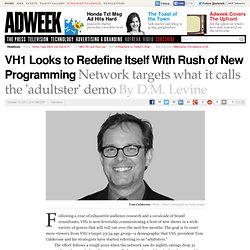 The goal is to court more viewers from VH1’s target 25-34 age group—a demographic that VH1 president Tom Calderone and his strategists have started referring to as “adultsters.” The effort follows a rough 2010 when the network saw its nightly ratings drop 31 percent from the year before. NewhouseSM6. Adweek. Advertising Agency & Marketing Industry News.