Native Advertising, Explained: Cannes Edition. This is a guest post by Andrew Graham, co-founder of Clear. 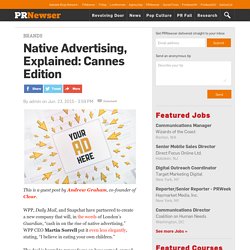 WPP, Daily Mail, and Snapchat have partnered to create a new company that will, in the words of London’s Guardian, “cash in on the rise of native advertising.” WPP CEO Martin Sorrell put it even less elegantly, stating, “I believe in eating your own children.” The deal is bound to renew focus on how earned, owned and paid media continue to evaporate into one consistent fog.

For PR pros who need a refresher, here are some basics of native advertising and a bit about what the three companies probably saw that led to the partnership. Defining native advertising Native advertising is the practice of making an ad on a platform resemble whatever content the user is there to see or read. Making paid content “native” to the rest of the platform in question isn’t exactly new. Many PR pros–even digitally savvy ones–confuse content marketing with native advertising. A matter of transparency. Public Radio, Capitalism and Native Advertising — To the Point. Public radio tells listeners it depends on them, not corporate advertising. 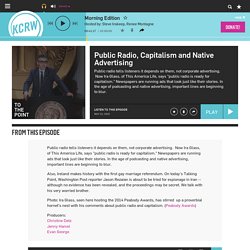 Now Ira Glass, of This America Life, says "public radio is ready for capitalism. " Newspapers are running ads that look just like their stories. In the age of podcasting and native advertising, important lines are beginning to blur. Also, Ireland makes history with the first gay marriage referendum. On today's Talking Point, Washington Post reporter Jason Rezaian is about to be tried for espionage in Iran -- although no evidence has been revealed, and the proceedings may be secret.

Photo: Ira Glass, seen here hosting the 2014 Peabody Awards, has stirred up a proverbial hornet’s nest with his comments about public radio and capitalism. Producers:Christine DetzJenny HamelEvan George. No, BuzzFeed Did Not Invent Native Advertising. News curmudgeons relish blaming the internet for things they don’t like, a pastime that is maddening, a little sad, and just ironic. 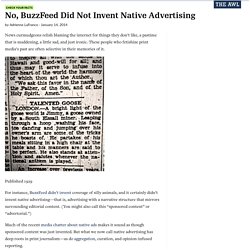 These people who fetishize print media’s past are often selective in their memories of it. Published 1929. BuzzFeed launches native video political advertising. Gawker gets one-third of its revenue from native and e-commerce. Gawker Media has an advertising problem. 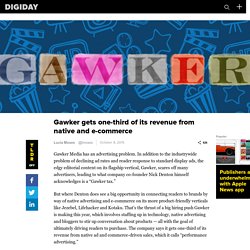 Opinion: Native advertising as we know it isn't sustainable. Antoine Boulin is president of media at the publishing company Purch The overwhelming majority of digital publishers (90 percent) have adopted or are considering adding native advertising to their sites. 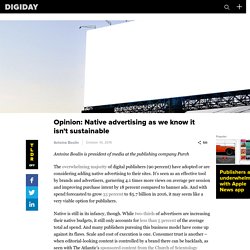 It’s seen as an effective tool by brands and advertisers, garnering 4.1 times more views on average per session and improving purchase intent by 18 percent compared to banner ads. And with spend forecasted to grow 33 percent to $5.7 billion in 2016, it may seem like a very viable option for publishers. Native is still in its infancy, though. While two-thirds of advertisers are increasing their native budgets, it still only accounts for less than 5 percent of the average total ad spend. 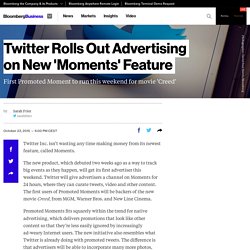 The new product, which debuted two weeks ago as a way to track big events as they happen, will get its first advertiser this weekend. Twitter will give advertisers a channel on Moments for 24 hours, where they can curate tweets, video and other content. The first users of Promoted Moments will be backers of the new movie Creed, from MGM, Warner Bros. and New Line Cinema.

Promoted Moments fits squarely within the trend for native advertising, which delivers promotions that look like other content so that they’re less easily ignored by increasingly ad-weary Internet users. The new initiative also resembles what Twitter is already doing with promoted tweets. "Promoted Moments will have all the features of a Moment you see right now, and instead of curators creating the moment, it’ll be a brand," said Matt Derella, Twitter’s vice president of revenue for North America. BuzzFeed changes editorial standards to allow sponsorships in entertainment programming. (AP Photo) BuzzFeed’s editorial standards were modified earlier this week to allow for greater collaboration between the company’s editorial and advertising staffers, a move BuzzFeed’s editor in chief says will enable the company to keep pace with promotional standards in the entertainment industry. 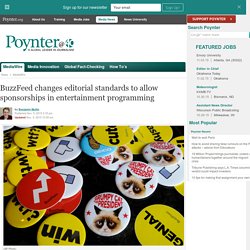 This week’s update to BuzzFeed’s standards is the latest in a series of editorial policy changes that have come as the company has evolved from a burgeoning Web startup to a journalistic powerhouse with a growing newsroom and satellite editions scattered across the globe. The change, says BuzzFeed Editor-in-Chief Ben Smith, was made as the company experiments with allowing advertisers to sponsor segments of scripted entertainment. The new language does not provide for news sponsorships and applies only to the company’s Life and Buzz divisions, sections of BuzzFeed that produce lifestyle, Web culture and social media content. Article or Ad? When It Comes to Native, No One Knows. Native advertising—articles paid for and/or written by a brand that live on a publisher’s site—has emerged as a powerful and popular new advertising tool over the past few years. 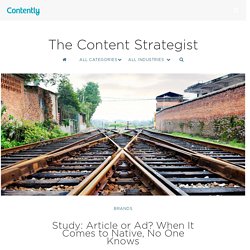 Native Advertising: Finding the right balance : Future Media Lab. As magazines and newspapers moved online, publishers have had to adapt traditional advertising to this new context. 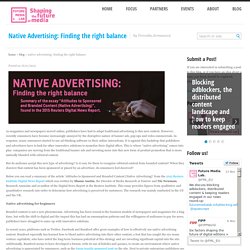 However, recently consumers have become increasingly annoyed by the disruptive nature of banner ads, pop-ups and video commercials. In response, many consumers started to use ad-blocking software in their online interactions. It is against this backdrop that publishers and advertisers have to look for other innovative solutions to monetize their digital offers. This is where “native advertising” comes into play: companies are moving from the traditional banner ads and investing more into this new form of product promotion that is more naturally blended with editorial content.