The 36 Companies That Spent $1 Billion On Ads in 2011. The 36 Companies That Spent $1 Billion On Ads in 2011. The Negative Effects of Women's Advertisements. 11 Facts About Body Image. Women in the Media: the Good, the Bad, and the Beautiful - Isis Magazine. False beauty in advertising and the pressure to look 'good' Jo Swinson: Studies link negative body image to viewing photoshopped "perfection"Pressure to meet false ideals of flawlessness, thinness, is overwhelming, she says Swinson: Images in banned L'Oreal ads amount to false advertising that preys on fearsChildren should grow up in culture valuing health and confidence, she writes Editor's note: Jo Swinson is a British member of parliament for East Dunbartonshire in Scotland and co-founder of the Campaign for Body Confidence. 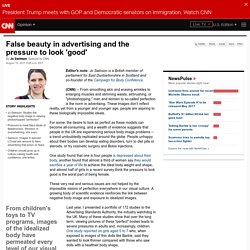 (CNN) -- From smoothing skin and erasing wrinkles to enlarging muscles and slimming waists, airbrushing, or "photoshopping," men and women to so-called perfection is the norm in advertising. These images don't reflect reality, yet from a younger and younger age, people are aspiring to these biologically impossible ideals. Suprising Self Esteem Statistics on Dove® !!!!!!!!!!!!!!!!!!!! Impact of New Beauty Stereotypes Created by Social Media. Offensive Ads: Worst Body-Shaming Advertisements. Body-shaming in the advertising industry is an age-old tactic. 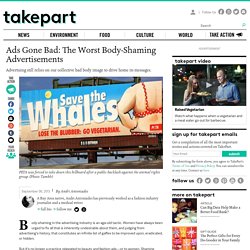 Women have always been urged to fix all that is inherently undesirable about them, and judging from advertising's history, that constitutes an infinite list of gaffes to be improved upon, eradicated, or hidden. But it's no longer a practice relegated to beauty and fashion ads—or to women. Shaming people in general about their physical appearance is now easily visible in campaigns ranging from pro-vegan advertisements to billboards encouraging childhood health. It may be we've gotten so used to body shame, we don't even see it anymore. But the longer we accept a singular, narrowly defined version of health and beauty, the longer we'll accept that making people feel bad about themselves is not only "helpful," but it's also deserved. Scroll down for some of the most overt body shaming ads from past and present campaigns. This came from AshleyMadison.com, a website that encourages people to cheat on their partners.

Cruelty sells. The Role of Social Media on Body Image & Body Stereotypes (avec images, tweets) · tarynt. Do you need stereotypes to market to women? If you are a woman reading this article and the image of the Sheryl Sandberg-type power mum doesn’t resonate with you, well, you could always be a domestic goddess; or the vixen embodying every man’s desire. 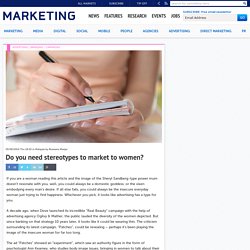 If all else fails, you could always be the insecure everyday woman just trying to find happiness. Whichever you pick, it looks like advertising has a type for you. A decade ago, when Dove launched its incredible “Real Beauty” campaign with the help of advertising agency Ogilvy & Mather, the public lauded the diversity of the women depicted. But since banking on that strategy 10 years later, it looks like it could be wearing thin. The criticism surrounding its latest campaign, “Patches”, could be revealing – perhaps it’s been playing the image of the insecure woman for far too long. The ad “Patches” showed an “experiment”, which saw an authority figure in the form of psychologist Ann Kearney, who studies body image issues, bringing in women to talk about their insecurities.

Beauty Standards Around the World - Beauty in Different Cultures. The Most Controversial Beauty Ads of 2012. Photoshop Parody Beauty Ads Reveal Just How Much Photos Are Digitally Altered. L'Oréal's pulled adverts: this ideal of female beauty is an abomination. The Persuasion Techniques of Beauty Product Advertising. Beauty...and the Beast of Advertising. Cosmetics advertising. Cosmetic advertising is the promotion of cosmetics and beauty products by the cosmetics industry through a variety of media. 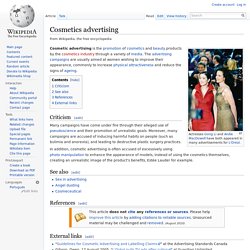 The advertising campaigns are usually aimed at women wishing to improve their appearance, commonly to increase physical attractiveness and reduce the signs of ageing. Criticism[edit] Many campaigns have come under fire through their alleged use of pseudoscience and their promotion of unrealistic goals. Moreover, many campaigns are accused of inducing harmful habits on people (such as bulimia and anorexia), and leading to destructive plastic surgery practices. In addition, cosmetic advertising is often accused of excessively using photo manipulation to enhance the appearance of models, instead of using the cosmetics themselves, creating an unrealistic image of the product's benefits, Estée Lauder for example. See also[edit] References[edit] External links[edit] Vintage Beauty and Hygiene Ads of the 1950s. Dove's 'Real Beauty' Hits a Rough Patch.

Has Dove jumped the shark? 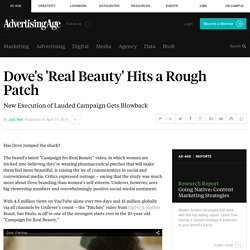 The brand's latest "Campaign for Real Beauty" video, in which women are tricked into believing they're wearing pharmaceutical patches that will make them feel more beautiful, is raising the ire of commentators in social and conventional media. Critics expressed outrage -- saying that the study was much more about Dove branding than women's self-esteem. Unilever, however, sees big viewership numbers and overwhelmingly positive social-media sentiment. With 4.5 million views on YouTube alone over two days and 15 million globally via all channels by Unilever's count -- the "Patches" video from Ogilvy & Mather Brasil, Sao Paulo, is off to one of the strongest starts ever in the 10-year-old "Campaign for Real Beauty.

" Then again, unlike prior installments of the campaign, it rolled into 65 countries simultaneously and had paid-media support from the start. Even beyond the outrage machine of social media, those critiques may have left an unsightly mark.