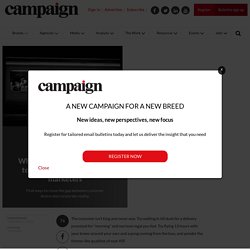 Try waiting in till dusk for a delivery promised for "morning" and see how regal you feel. Try flying 13 hours with your knees around your ears and a pong coming from the loos, and ponder the throne-like qualities of seat 45F. Kings don’t live like that. They snap their fingers and wishes are granted, whims indulged. Little exigencies like profitability, operational logistics, industrial relations and regulatory constraints don’t come into it.

Sir Tim Clark, president of Emirates, had a good way of articulating the problem – and finding solutions. The marketing genius of Emirates in its early days was to find small, overlapping ways to close the desire gap – to help even right-turn passengers feel that, if not royalty, they were still a little special. Those micro-innovations needed to be calibrated, considered from an operational and financial viewpoint and weighed in every sense. Even this can be naïve, though. Could do better. JWT's global CEO on driving diversity and agile creativity. One of the few women to lead a major advertising agency, Tamara Ingram took on the global CEO position at JWT earlier this year. 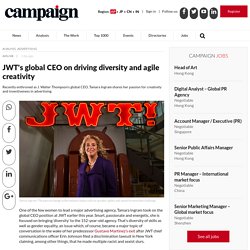 Smart, passionate and energetic, she is focused on bringing ‘diversity’ to the 152-year-old agency. That’s diversity of skills as well as gender equality, an issue which, of course, became a major topic of conversation in the wake of her predecessor Gustavo Martinez’s exit after JWT chief communications officer Erin Johnson filed a discrimination lawsuit in New York claiming, among other things, that he made multiple racist and sexist slurs. Based in New York, Ingram, who until recently ran global account teams, isn’t able to comment on Martinez and the lawsuit. She does, however, share her views on gender equality and the positive impact diversity can have on businesses, as well as what she sees as the future of creativity.

Atifa Silk: How did you get into advertising? Atifa Silk: What has been your biggest challenge since you took on the JWT job? Marketers need to be comfortable with ambiguity, says McDonald’s Richard Murphy. Mcdonald’s CVP of digital, growth and foundational markets Richard Murphy called on marketers to become more comfortable with the uncertainties of technology, citing the adage “it’s no longer the big that eat the small, it is the fast that eat the slow. 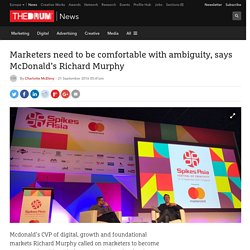 ". Murphy was speaking alongside Stephen Li, chief executive at OMD APAC, about the anatomy of fear in the context of modern, risky marketing strategies at Spikes Asia today. The discussion focused on the ways in which brands like McDonald’s can start to become more comfortable with unknowns. Murphy, said: “We know the outcomes but don’t know how to get there all the time. This makes me feel nervous and fearful because I don't have the data points to make the decisions.

It is about being comfortable with ambiguity, the idea of being able to fail fast and go again. He said that an important difference in being brave and being reckless came down to planning for the failures. OMD's Digital Head Wants to Foster Cooperation Between Media and Creative Partners. Specs Current gig OMD, chief digital and innovation officer Previous gig Meredith Xcelerated Marketing, chief innovation officer, general manager Twitter @dougs_digs Age 41 Adweek: You've been OMD's chief digital and innovation officer for about three months. 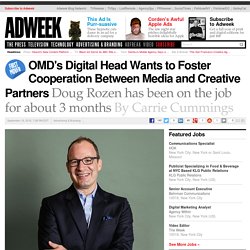 What's that role like? Doug Rozen: On the digital side, it's really about ensuring that all clients, as well as ourselves internally, are delivering against the fullest and widest array of digital possibilities. For me, what this comes down to is that digital today is not any particular thing or any specific channel—it really stretches across all [channels] and is about rising above talking about TV, print, radio, desktop, etcetera, as channels, and start talking more about formats like audio, video, visual and how then digital allows those formats to be addressable. What do you mean by that? You were previously at Meredith. DDB, which like OMD is part of Omnicom, recently won McDonald's U.S. creative account.