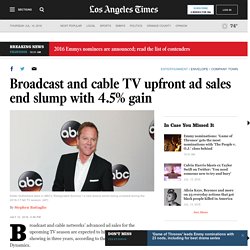 The New Jersey firm, which has long tracked advertising spending for what’s known in the TV industry as the upfront market, said its preliminary estimate for this year’s auction is up $800 million compared with last year, a gain of 4.5%. Last year’s total of $17.8 billion was down 3% from the previous year, which experienced a 4.4% slip compared with 2013. While ratings for broadcast and cable TV networks have eroded as viewers stream online video entertainment in greater numbers, advertisers continue to express confidence in TV’s ability to reach mass audiences in a short period of time. Online advertising continues to grow at a robust pace, but this spring, ad agency executives indicated that they were directing some money back into TV. 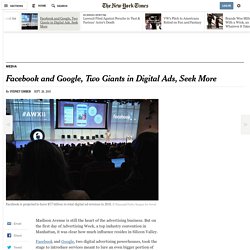 But on the first day of Advertising Week, a top industry convention in Manhattan, it was clear how much influence resides in Silicon Valley. and , two digital advertising powerhouses, took the stage to introduce services meant to lure an even bigger portion of digital marketing dollars. Facebook introduced a tool that allows advertisers to buy video ads using a ratings metric similar to one used for buying television commercials. The goal is to make it easier for advertisers to plan and buy ad campaigns across television and Facebook. Virtual Reality Is the Next Frontier for Retail. For some customers, the story behind a product can be almost as important as the product itself. 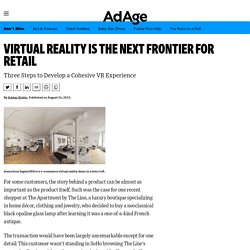 Such was the case for one recent shopper at The Apartment by The Line, a luxury boutique specializing in home décor, clothing and jewelry, who decided to buy a neoclassical black opaline glass lamp after learning it was a one-of-a-kind French antique. The transaction would have been largely unremarkable except for one detail: This customer wasn't standing in SoHo browsing The Line's curated collection with a sales associate by her side. She was halfway around the world, interacting with a cutting-edge virtual display that used 360-degree video technology and a Samsung Gear VR headset to tour the showroom and learn more about the items she liked.

While VR will likely leave its mark on nearly every industry, perhaps none is poised for transformation more than retail. 1. 2. Watch Fox ‘MasterChef Junior’ Online Without Ad Breaks. What a Tangled Web Native Advertising Will Weave. 83 Flares Twitter 54 Facebook 0 StumbleUpon 0 Google+ 5 LinkedIn 21 inShare21 Buffer 3 Reddit 0 Pin It Share 0 Email -- Email to a friend 83 Flares × I’m not sure if you’ve seen this video yet. 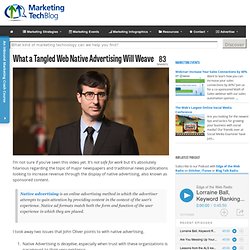 It’s not safe for work but it’s absolutely hilarious regarding the topic of major newspapers and traditional news publications looking to increase revenue through the display of native advertising, also known as sponsored content. Native advertising is an online advertising method in which the advertiser attempts to gain attention by providing content in the context of the user’s experience.

Native ad formats match both the form and function of the user experience in which they are placed. I took away two issues that John Oliver points to with native advertising. Cable Under Fire: Plunge in Ratings Could Spell Trouble for Top Nets. 'Hersterical' Women Shine at This Year's New York Comedy Festival By Stuart Miller While this year's New York Comedy Festival features a panel called Women Aren't Funny: Debunking the Myth, it's the festival itself that is shredding the myth: It kicks off with the second annual… 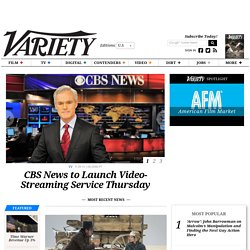 Comcast Mulls Purchase of Ad-Tech Firm Visible World — Report. Comcast is considering the purchase of Visible World, a firm that specializes in helping advertisers create and distribute commercials for specific groups of TV viewers, according to a report in the Wall Street Journal, the latest signal that big media companies are trying to gird themselves against new pressure from sponsors to help them reach smaller, better-defined groups of consumers. 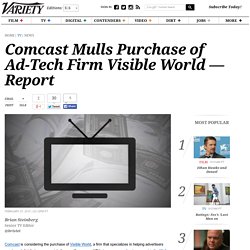 The deal is not imminent, the report cautioned, and the two companies could end up forming a partnership instead. The newspaper attributed its information to “people familiar with the matter.” New York-based Visible World uses technology to help advertisers create commercials tailored to discrete segments of the TV audience, using set-top boxes. AT&T Z-depth system would replace TV ads with ‘personalized contextual video programs’

If AT&T succeeds with a new advertising system disclosed in a patent application on Thursday, TV commercials would be replaced by virtual product placements tailored for individual viewers based on profiles containing information about viewing history and demographics. 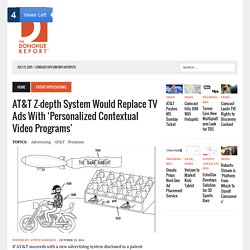 In the advertising world envisioned by AT&T inventors, automobile manufacturers wouldn’t buy 30-second spots. Instead, Mercedes, Chevrolet and Acura would bid for the right to have one of their new models featured as the car driven by characters in a primetime program. “A television show may depict the protagonist driving in a Mercedes. The entire Mercedes can be a segment that covers multiple frames and changes position, size, and angle over the frames. 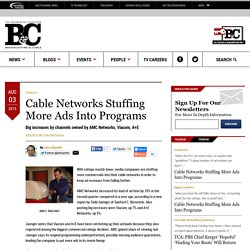 AMC Networks increased its load of ad time by 10% in the second quarter compared to a year ago, according to a new report by Todd Juenger of Sanford C. Bernstein. Also posting big increases were Viacom, up 7% and A+E Networks, up 5%. Juenger notes that Viacom and A+E have been ratcheting up their ad loads because they also registered among the biggest commercial ratings declines. AMC gained share of viewing, but Juenger says its original programming underperformed, possibly missing audience guarantees, leading the company to put more ads in its movie lineup.