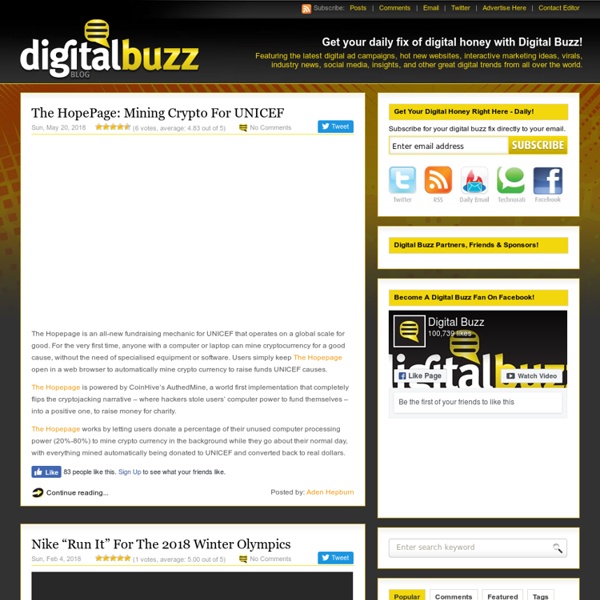 Playstation have created an installation that challenges people to insert their fingers into a machine that shock them, as a stunt to promote the new ‘inFAMOUS: Second Son’ game. People step right up, insert their fingers into the holes in the machine, before it charges up and starts increasing the shock over 5 long seconds… If you make it all the way, you win the new game! Great stunt for Playstation Belgium, but not many YouTube views… Created by TBWA. (Thanks Rindert)

Forum Qualitative Sozialforschung / Forum: Qualitative Social Research FQS is a peer-reviewed multilingual online journal for qualitative research established in 1999. FQS thematic issues are published tri-annually. In addition, selected individual contributions and contributions to the journal's regular features FQS Reviews, FQS Debates, FQS Conferences and FQS Interviews are published as soon as they have undergone peer review. FQS is an open-access journal, so all articles are available free of charge.

30 Beautiful and Creative Ad/Marketing Agency Websites Advertising and marketing agencies often position themselves as being specialists in creativity. So it’s just natural that their websites are often creative and beautiful. As clients expect these businesses to be creative (and a website is often one of the first things potential clients look at), ad agencies need to have effective and impressive websites. Below is a collection of 30 agency websites from all across the globe. Take a look at these websites for creative web design inspiration.

branded entertainment branded entertainment Posted by Dale Buss on February 14, 2014 07:17 PM Reports are that BMW is going to revive in some form its initiative of more than a decade ago that helped create—and, in the eyes of many critics, still reigns over—what has become an explosion in branded video content. Trudy Hardy, BMW's CMO in the US, has indicated that the brand will be bringing back BMW Films, which comes as great news to auto buffs and film buffs alike. The Hire, the automaker's award-winning series of eight online films, were directed by Guy Ritchie and starring Clive Owen, were produced for the web from 2001-2002.

CodeVerificationAndUnitTesting - google-toolbox-for-mac - Code Verification and Unit Testing in GTM. - Project Hosting on Google Code Google Toolbox For Mac (GTM) is extensively unit tested. As of this writing we have about 91% code coverage with our unit tests. We expect any submissions to GTM to come with a complete unit test suite, testing as much functionality as is reasonably possible. 7 Exciting Web Development Trends for 2011 At the end of December, you read Andrew's list of the hottest technologies, tools, and resources to come from 2010. Today, we're going to look forward, and take a peek at some exciting emerging technologies and trends. A Word from the Author

Home - futurechallenges.org Manila’s waterways are constricted by informal settlers. Photo courtesy: Chrischug-e-rodriguez (CC-BY- SA-3.0) They’re probably gambling with death and disaster, but the families who live in the danger zones of Metro Manila would rather not leave their homes. The reasons are mainly economic – they work near where they live, hence they would rather turn a blind eye to the hazards of living near creeks and estuaries. This, however, has grave consequences for the rest of the city, because increasing number of shanties lead to constriction of the waterways. Which exacerbates flooding. Best of Brands & Content Screenings April 9, 2013 Ogilvy presents four examples of how to make valuable branded entertainment By Angela Natividad Photo: OgilvyEntertainment president Doug Scott (left), executive creative director Panos Sambrakos, Ogilvy One Worldwide.

qsb-mac - Project Hosting on Google Code Quick Search Box is an open source search box that allows you to search data on your computer and across the web. With Quick Search Box you can search for information from just about anywhere. You can then perform actions on the search results, such as launching applications, emailing friends, or playing a song. If you are interested in participating in the Quick Search Box development process, download the app or build it from source.