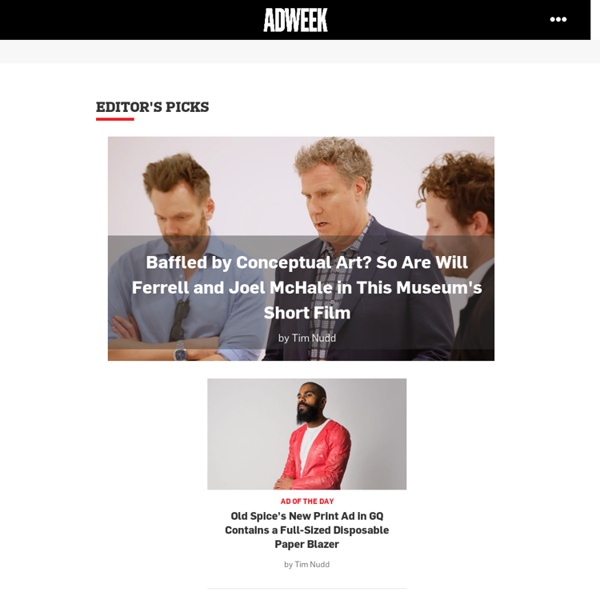 10+ Independent Online News Sources and Why America Needs More of Them A poll done by the Pew Research Center, in September of 2011, found that, “Fully 66% (of the public) say news stories often are inaccurate, 77% think that news organizations tend to favor one side, and 80% say news organizations are often influenced by powerful people and organizations.” A more recent Gallup poll, taken in September of 2015, showed that 60% of Americans still do not trust the mass media to deliver the news fully, accurately and fairly. These numbers are not so much a bleak outlook but evidence that the public is finally beginning to realize that the mainstream media cannot be trusted – a good thing and perhaps a catalyst for change. Americans need to understand what is really happening in our country and the rest of the world by reading, watching and listening to a variety of news sources, not only the mainstream media.

20+ Creative Advertising by McDonalds Today’s post is dedicated to McDonalds adverts that I have come across in the past while doing searches on the net. I’ve chosen the most creative and funny ones to show you today, hope you in enjoy. McDonald’s: Rescue for hungry people McDonald’s: Billboards 200m-197m S. Philippines faces food insecurity after floods BANGKOK (AlertNet) - Recent flooding in the southern Philippines has affected half a million people and destroyed crops, raising concerns about food shortages in the coming months, the U.N. World Food Programme has said. The waters have now subsided considerably.

Ad of the Day: The 'Guardian' Covers the Three Little Pigs as a Modern News Story Newspapers, we know, are under siege. Ravaged, in more ways than one, by the Internet and a digital age they failed to comprehend and adjust to, they're in a death struggle to remain editorially relevant and financially solvent. Out of touch, out of money … a joke, or at least a punch line—the future is grim. So, it's a bit shocking, then, that a newspaper—that symbol of supreme irrelevance—has delivered one of the most bracingly, brilliantly relevant ads of 2012 so far.

Sports and Fitness Club Sample Marketing Plan - Marketing Vision This marketing plan is a means for Jamestown Sports and Fitness to refocus its identity as differentiated from competitors in its market. This will involve rebranding, refocusing activities, and redeveloping many marketing materials in the coming six months. Follow up and careful examination of results over the next three years will determine whether this marketing direction is having the desired effect. Get practical ideas and good models with dozens of examples of successful

Who Owns the Media? Broadcasters make billions in profits while using the public airwaves for free. In return, they are supposed to provide programming that fulfills community needs. Instead, lobbyists have successfully fought to make it easier for broadcast companies to gobble up even more free airspace while doing less to serve the public. Take Action to end the big broadcast swindle. 2011 Revenue: $6.2 billion The Showcase of Creative Car Advertising Suzuki: Ostrich During the global economy crisis it was pretty hard to sell a car because people decided not to buy cars because they were told that people are more and more deciding not to buy cars. This sounds pretty complicated but the companies who sell the cars usually have only one goal: to sell as more cars as you can. In that manner, they are trying to pursue the maximum of creativity of their ad-makers.

Best of Russia on display The motto of the exhibit—“the main thing is not winning but participating”—is often seen as consolation for losers, but in the Best of Russia 2010 contest, this phrase is synonymous with success. An extremely large number of photos were eliminated in preliminary screening. The jury received 26,546 photos from across the country and had to select 365—the number of days in the year, so all the photographers who made the list are automatically winners. The 10 Best Commercials of 2011 Many people groaned last winter when it became clear that Super Bowl XLV would be packed bumper to bumper with automotive ads. It's not a category that's exactly wowed with its creativity in recent years. It was a pleasant surprise, then, when many of the car spots proved not only tolerable but wonderful.

School Of Business Administration: Department of Marketing Department of Marketing » Marketing Careers You just cannot go wrong with a choice of a career in marketing with a third of all Americans employed in marketing related positions. The knowledge gained from marketing the products of your company is the first stepping stone for the highest levels in the organization. Advertising Press Accuracy Rating Hits Two Decade Low Public Evaluations of the News Media: 1985-2009 Overview The public’s assessment of the accuracy of news stories is now at its lowest level in more than two decades of Pew Research surveys, and Americans’ views of media bias and independence now match previous lows. Just 29% of Americans say that news organizations generally get the facts straight, while 63% say that news stories are often inaccurate. In the initial survey in this series about the news media’s performance in 1985, 55% said news stories were accurate while 34% said they were inaccurate. That percentage had fallen sharply by the late 1990s and has remained low over the last decade.

When Food Attacks! [advertising] When Food Attacks! [advertising] August 21, 2009, 1:00 pm 4 Comments View larger. Via adsoftheworld.com. Imagination > News Public demo versions of the IMAGINATION prototype are now available. Please try them at www.imagenotion.com and let us know what you think. 2009. September 14ICT Results reports on IMAGINATION 2009. Most creative and interesting advertisements for 2011 It is always said that first impression is the best impression so to grab public attention towards their products the agencies and the large conglomerates stick to the creative advertisements. These advertisement techniques and unique idea helps you to spread your product or services successfully. Whether the ad is about cars, cool drinks, electronics anything which you think off; with its hilarious and creative ideas will either impress you or makes you look twice. We will take you to an excursion into the world of stunning creative ads enjoy! About the author