Fish, bicycles and the future of digital advertising. Can YOU spot the secret messages in these logos? From the endearing McDonald's golden arches, to the simple Nike tick, many brands are instantly recognisable by their logo.

And some, including BMW, FedEx and Carrefour, have gone to the extra effort to include hidden messages. You might not instantly be able to spot the hidden meaning, but once you see it, it's hard to forget. Scroll down for the answers The FedEx logo was created in 1994, and is instantly recognisable, with block writing in purple and orange. But can you spot the hidden logo? What Exactly Is an Advertising Pitch? If you watch any TV shows or movies that involve advertising, you will eventually hear the players talking about pitching. 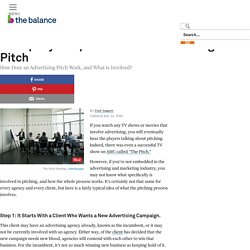 Indeed, there was even a successful TV show on AMC called “The Pitch.” However, if you’re not embedded in the advertising and marketing industry, you may not know what specifically is involved in pitching, and how the whole process works. It’s certainly not that same for every agency and every client, but here is a fairly typical idea of what the pitching process involves.

Step 1: It Starts With a Client Who Wants a New Advertising Campaign. This client may have an advertising agency already, known as the incumbent, or it may not be currently involved with an agency. Sadly, some agencies use the pitching process as a way to light a fire under their incumbent, with no real intention of ever hiring a new agency. Step 2: The Client Puts Out a Request For Agencies to Pitch. This is commonly known as an RFP, or Request For Proposal. “Just imagine where we could take you?” Belgian National Lottery: Nadine. Ad of the Day: Canadian Beer Sees How Many Absurd Slogans It Can Fit in a Single Ad. Tired of Miller Time? 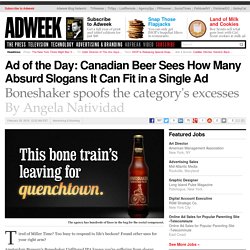 Too busy to respond to life's beckon? Found other uses for your right arm? The craziest cases of subliminal advertising. Neato Robotics: House sitter. One-Word Slogans: More with Less. Slogans. 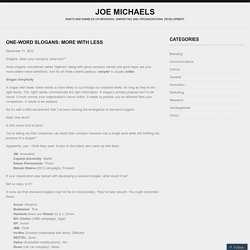 Does your company need one? * Good slogans–sometimes called “taglines”–along with good company names and good logos are your most-salient brand identifiers. And for all three (ceteris paribus), simpler is usually better. Slogan Simplicity A slogan with fewer, better words is more likely to cut through our cluttered world. So it’s with a little amusement that I’ve been noticing the emergence of one-word slogans. Wait! Is this some kind of joke? You’re telling me that companies can distill their complex missions into a single word while still fulfilling the purpose of a slogan? Advertising. Browse TV Commercials. Read the latest creative advertising content.

Chuck Taylor Wearers Tell Their Stories in This Gorgeously-Filmed Converse Ad - Video - Creativity Online. Editor's Pick Converse's new film for its Chuck Taylor shoes takes stories from different owners all over the world -- from tatooists in China to graffiti artists in LA -- and inserts them into this superbly shot and edited film. 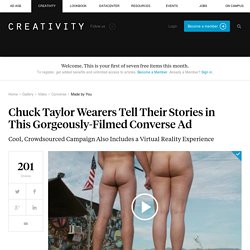 The spot, by Anomaly, is set to a soundtrack of Parisian electro-pop by SebastiAn that boosts its cool, quirky flavor, and spearheads a wider campaign for the brand that puts all its emphasis on crowdsourcing. French directors We Are From LA (the pair behind Pharrell William's Happy and Air France's France Is in the Air ad which launched this week) shot in London, Los Angeles and Shanghai, while editorial house Cut+Run combed the footage to select personal, funny or naturally inspirational stories or philosophies that connected with the brand's concept of "Made by you. " This Tale of a Broken Hearted Office Doggie Has a Surprise Ending - Video - Creativity Online. Audi Need a Service? Don't Stop for These Guys - Video - Creativity Online. Editor's Pick In this dramatic ad from German agency Thjnk to promote Audi's service contracts, an Audi glides through a desert landscape when its service light blinks on. 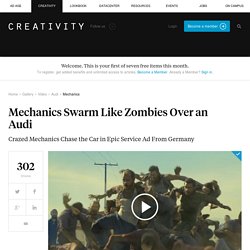 However, it bypasses all the rundown local garages where the mechanics, drawn to it like Walkers sniffing some live meat, come out and follow it until we see a whole swarm of them chasing the car. Of course, it's headed to the Audi garage, where the doors slam shut on the now thousands of crazed mechanics. The spot, directed by Radical Media's Sebastian Strasser, was shot over four days in Los Angeles.

The ambitious crowd scenes, which feel like something out of World War Z, impart intensity to the ad, although according to producer Christoph Petzenhauser, about two-thirds of the ad was shot in-camera. Very Funny Ads. I love using adverts in my teaching. 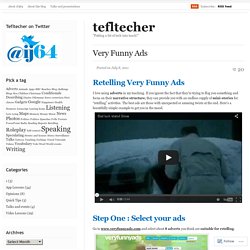 If you ignore the fact that they’re trying to flog you something and focus on their narrative structure, they can provide you with an endless supply of mini-stories for “retelling” activities. The best ads are those with unexpected or amusing twists at the end. Here’s a beautifully simple example to get you in the mood. Bells "The Reader" directed by Greg Gray. Chicken Licken "Bang Bang" directed by Greg Gray.