Six Pixels of Separation - Marketing and Communications Blog - B 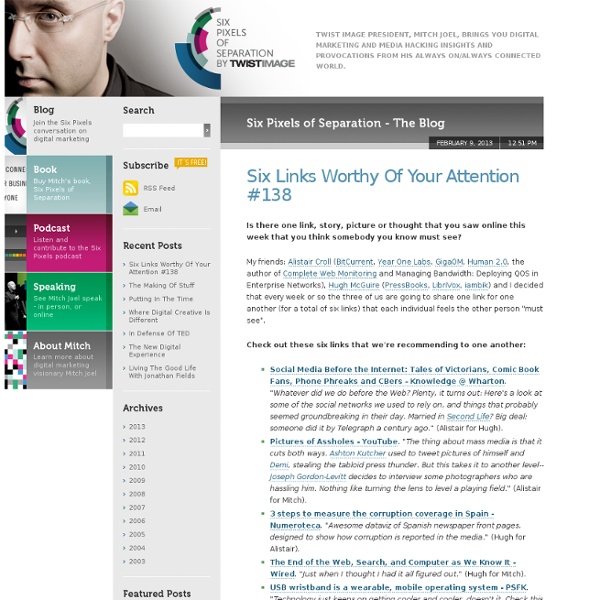 Is your head bleeding? Is your heart bleeding? Here's my thought (and, I say this with full disclosure that I am no IT expert and have limited knowledge of the hacking space beyond a personal interest in better understanding technology - peace and love... peace and love...), but the process of text-based passwords needs to be tossed out. It just has to happen. We're all still trying to understand what the ramifications are of this nefarious Heartbleed bug is, and what it all means. Right now, some of the most frequently and commonly used online tools and sites are asking all of their users to change their passwords because of this bug. Why this is so important to talk about for marketers? The brands that win are the brands that can be trusted. It's like a full time job to manage this stuff, isn't it? It gets worse. Blame the passwords. These systems were built in a such a way that invites problems and challenges. Some thoughts on a better way to connect. By Mitch Joel

Web Strategy by Jeremiah Owyang By Jeremiah Owyang, from Silicon Valley In many respects, Silicon Valley sits atop the world. Its growth and influence has made it the globe’s top location for innovation, STEM jobs, IT patents, venture capital funding, and Internet and software growth, and Unicorn startups galore. And yet there’s also been a shift in the Valley’s culture. Growing social and economic rifts have bred fraud, anger and protests. Where housing isn’t in high demand, neighborhoods lay abandoned. The Guide To Search: Why Social & Mobile Are The Future Search is currently in a transition period right now. As algorithms become more complex and the major search engines introduce new features, it's clear that our expectations about how search should work and what it can do for us has risen with every new development. It's not enough that it just suggests relevant information.

Best Practices For Writing For Online Readers I have less than 30 seconds to capture your attention with this post, so here goes: if you read some, most or all of the next 750 words or so, you will know how to write Web copy that is more useful to readers of your blog or Web site. As we reported yesterday visual content is continuing its steady rise in dominance over written content. But that doesn't mean we should give up on good writing: if anything, it means we need to think harder about how we write for online readers. Online Readers Are Different Seems pretty obvious, right? But the fact is, many of us still write the same way online as we do for books, magazine articles and other long-form and traditional print mediums.

Cinch - Create and share micro podcasts, images and text updates on CinchCast.com Since merging with fellow virtual communications leader Cinchcast, Inc., BeaconLive now offers services and technology to support every type of distributed event – ranging from fully managed, moderator-assisted webcasting productions to do-it-yourself webinar hosting, and everything in between. Looking for a DIY virtual communications and content hub you can tailor to your organization’s specific needs? We've got you covered. Brains On Fire Blog I asked our super shiny smart intern Kate to help me visually illustrate some of my favorite lines in the Brains on Fire book. I gave her little direction, just marked a few one-liners I love. I’ll share some of her art with you over the coming weeks. If you’ve read the book and have a favorite one-liner, let me know and I’ll ask her to produce it for you when she has little free time. That’s one of my favorite things about having interns amongst us! Geno, Vicky and I had the honor of attending Love146’s ten year celebration in New York last week.

Why social media strategy should not start with a drive for Facebook fans Why does every social media strategy seemingly start with a company cajoling people to come “like” their Facebook page? This post will explain why that is usually a bad strategy if you are aiming at creating long-term, loyal customers. I’ve been honored to be selected to help judge a global company’s internal social media competition. Entries were submitted from all over the country as their locations put forward their best shots at social media gold. There were some interesting entries, even some very good ones, but they all had one thing in common. In the “objectives” section, every single organization stated something like this:

6 simple steps to keep your mind sharp at any age May 24, 2011 Everyone has the occasional “senior moment.” Maybe you’ve gone into the kitchen and can’t remember why, or can’t recall a familiar name during a conversation. Memory lapses can occur at any age, but aging alone is generally not a cause of cognitive decline. ABC Online: Podcasting Podcasting is a convenient way of automatically downloading audio or video files to your computer. You can then play this audio or video on your computer or transfer the files to a portable MP3 or video player. 'Podcast' generally refers to audio. 'Video Podcast' (or 'Vodcast') refers to the distribution of video files in the same manner.

How agencies are reinventing the creative team in the social era Agencies Published on September 24th, 2012 | by Steve Hall Over the years, the integration versus unbundling debate has raged on within the advertising industry. One side would argue it’s best to have all necessary expertise under one roof. Others would argue it’s best to create or partner with entities that offer specialized focus. Mechanics BBC News: "Dark matter hunt: US LUX experiment reaches critical phase" (video) Public Lecture on Friday, April 11: "All Stars: Reflections on the Study of the History of Astronomy at Brown" at Ladd Observatory LUX dark matter results confirmed Science and Curiosity walk into a pub: Professor Dell'Antonio discusses dark energy at the English Cellar Alehouse, as part of the series organized by the Science Underground group Brad Marston and Jim Valles have been elected as 2013 fellows of the American Physical Society

Social Media Is Making You a Smarter Leader - Dorie Clark by Dorie Clark | 11:00 AM November 14, 2012 It’s easy to point to the problems with social media: lost productivity from employees checking Facebook at work, new “personal branding” responsibilities to tend online, and a general deluge of information that’s impossible to keep up with. When we do hear about the benefits of social media, it’s usually in a business context (praising the rise of “viral marketing on steroids”) or focused on a macro, societal perspective (NYU professor Clay Shirky has famously cited the “cognitive surplus” resulting from online tools like Wikipedia, which allow people to contribute small amounts of time or effort, but in the aggregate create vast new informational resources).

Top 10 Universities With Free Courses Online #1 UC Berkeley Ranked as the #1 public school in the United States, Berkeley offers podcasts and webcasts of amazing professors lecturing. Each course has an RSS feed so you can track each new lecture. For printable assignments and notes you can check the professors homepage, which is usually given in the first lecture or google his name. Even though the notes, homework and tests are not directly printed in the berkeley website, as they are in MIT and other courseware sites, it's not a problem to find them.

How to Use Foursquare to Market Your Business & Reach a New Audience 23 December '12, 05:00pm Follow When we think of social media and business, the first few things to come to mind are Facebook and Twitter. Yet, there is one mobile app that tends to get overlooked by businesses: Foursquare.

Meet the man who makes six figures a quarter just from using Twitter For anyone who is semi-active on Twitter, the chances are they have been followed, retweeted or received a direct message from someone who calls him or herself a ‘social media guru’. The characteristics are always the same: countless thousands of followers, which almost exactly mirror the number of people the person follows, with plenty of self-promoting keywords and hashtags filling out their profile. Social media gurus (mavens, ninjas, masters) are everywhere you look on Twitter.