Snickers Found Amusing Fails All Over NYC and Put These Stickers Next to Them. BBDO New York continues its run of great work for Snickers with this irresistible out-of-home campaign, in which the candy brand found goofy mistakes all around New York City—and put stickers next to them that read, "You make mistakes when you're hungry. 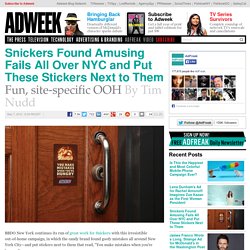 " The fails are curious and amusing in their own right, of course, which is what makes this idea work so well. Adding a little snarky sticker caps them off perfectly. It helps that Snickers has had affection for people's mistakes for a long, long time. The agency tells us the creatives scouted for mistakes throughout Manhattan and Brooklyn over the past few weeks and selected the most absurd ones for the campaign. Visa: Signature Wallet on BannerBlog. Digital Buzz Blog  RockMelt: The New Social Web Browser  A new web browser called RockMelt launched it’s invitation to beta through a Facebook authentication scheme last week, and to get everyone excited, they kicked off by releasing this demo video that has racked up 500,000 views. 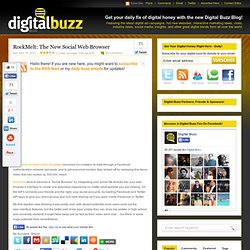 Rockmelt aims to become a “Social Browser” by integrating your social life directly into your web browser’s interface to create one seamless experience no matter what website you are viewing. On the left it connects your friends and the right, your social accounts, by loading Facebook and Twitter API apps to give you direct access and one click sharing as if you were inside Facebook or Twitter. My first reaction was thinking it was pretty cool, with decent potential once users work out the new interface features, but the better part of me says unless they can drive big uptake in high school and university students it might fade away just as fast as their video went viral… but there is some huge potential here nevertheless. Short Film: A Life On Facebook  Google New: Everything New From Google   Digital Campaigns, Online Marketing, Websites & More. Augmented Reality City 3D (Glasses Required!)

Scion tC: Augmented Reality Game  Heineken: Guerrilla Marketing Event In Italy  This is a pretty brave guerrilla marketing event by Heineken on the eve of one of the biggest matches you can imagine, Real Madrid vs AC Milan. Now you’re probably thinking it’s something out on the street, taking advantage of all the crazed soccer fans passing by, but you’d be wrong… Heineken decided to stage a fake event at the same time the game was to be played, a mix of classical music meets poetry in an Italian theater.

To make this happen, they recruited about 200 people to help get over 1000 people away from their TV’s and into this event, sacrificing the biggest game of the season! Heineken even had the event broadcast live on SkySport, with crosses for interviews of famous sporting celebs to aid in the Authenticity, or infact, leverage some of the people who’d been stung by the stunt! As the event got underway and the males in the audience got increasingly bored, the stage slowly released clues to involve them as the big reveal came!

(via Daniel on Adverblog ) HTML 5 Showcase: The Wilderness Downtown  I remember seeing this as it launched last week and was itching to post it, I held back a few days, because I wanted to showcase it as a video so everyone could get the full visual experience (it only works in Chrome browser, so naturally, the demo was built by Google!). 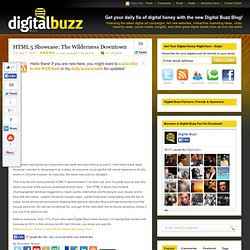 This is by far, the most powerful HTML 5 demonstration I’ve seen yet, and it’s pretty easy to see why when you look at the serious javascript at work here… The HTML 5 demo has multiple choreographed windows triggered by music points, interactive bird flocking to your mouse and in time with the music , custom rendered Google maps , perfect real-time compositing over the top of maps, some advanced procedural drawing that delivers velocity influenced tree branches from the mouse and even 3D canvas rendering! Stop Motion Human PAC-MAN Game  Video: Introducing Google Instant Search

You’ve probably heard about the new Google Instant Search, so here is the introduction video to help you understand exactly what instant search is, how it works and why it’s so great. 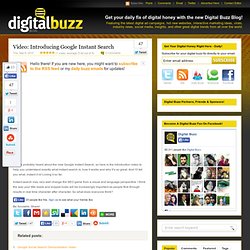 And I’ll tell you what, instant it is! Loving it so far. Instant search may very well change the SEO game from a visual and language perspective. I think the way your title reads and snippet looks will be increasingly important as people flick through results in real time character after character. So what does everyone think? Video: The Future of Screen Technology  Nike+ GPS iPhone App Released  Nike: Sneak & Destroy On Facebook Places  This was a cool experiential campaign from Nike to promote the Varsity Destroyer jacket. Teaming up with Koi Fusion, a popular food truck, Nike tweeted clues to followers in search of the Koi Fusion truck, once found, you had to check in with Facebook Places and then order a secret menu item… The Destroyer Burrito.