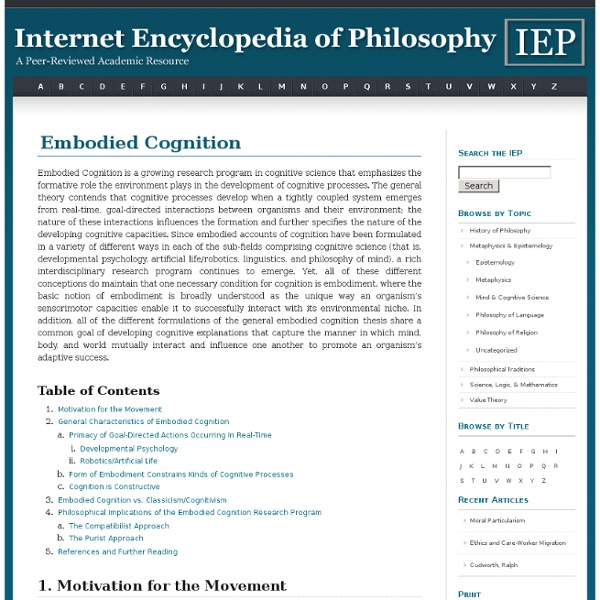 Embodied Cognition is a growing research program in cognitive science that emphasizes the formative role the environment plays in the development of cognitive processes. The general theory contends that cognitive processes develop when a tightly coupled system emerges from real-time, goal-directed interactions between organisms and their environment; the nature of these interactions influences the formation and further specifies the nature of the developing cognitive capacities. Since embodied accounts of cognition have been formulated in a variety of different ways in each of the sub-fields comprising cognitive science (that is, developmental psychology, artificial life/robotics, linguistics, and philosophy of mind), a rich interdisciplinary research program continues to emerge. Table of Contents 1. 2. To say that cognition is embodied means that it arises from bodily interactions with the world. a. i. Hannah’s problem was different from Gabriel’s, but it was also the same. ii.

George Orwell: "Notes on Nationalism" May, 1945 Somewhere or other Byron makes use of the French word longeur, and remarks in passing that though in England we happen not to have the word, we have the thing in considerable profusion. In the same way, there is a habit of mind which is now so widespread that it affects our thinking on nearly every subject, but which has not yet been given a name. By "nationalism" I mean first of all the habit of assuming that human beings can be classified like insects and that whole blocks of millions or tens of millions of people can be confidently labelled "good" or "bad." So long as it is applied merely to the more notorious and identifiable nationalist movements in Germany, Japan, and other countries, all this is obvious enough. It is also worth emphasizing once again that nationalist feeling can be purely negative. In England, if one simply considers the number of people involved, it is probable that the dominant form of nationalism is old-fashioned British jingoism. OBSESSION.

Colorburned | Graphic design resources, tutorials, and more! Myers-Briggs Type Indicator Model of personality types A chart with descriptions of each Myers–Briggs personality type and the four dichotomies central to the theory. In personality typology, the Myers–Briggs Type Indicator (MBTI) is an introspective self-report questionnaire indicating differing psychological preferences in how people perceive the world and make decisions. The test attempts to assign a value to each of four categories: introversion or extraversion, sensing or intuition, thinking or feeling, and judging or perceiving. One letter from each category is taken to produce a four-letter test result, such as "INTP" or "ESFJ".[2][3] The MBTI was constructed by two Americans: Katharine Cook Briggs and her daughter Isabel Briggs Myers, who were inspired by the book Psychological Types by Swiss psychiatrist Carl Jung. History[edit] Briggs began her research into personality in 1917. Myers' work attracted the attention of Henry Chauncey, head of the Educational Testing Service. Format and administration[edit]

LucidInterval.org - A Self-Management Guide for Bipolar Disorder TARA Association for Personality Disorder How to increase serotonin in the human brain without drugs The Limits of Intelligence Santiago Ramón y Cajal, the Spanish Nobel-winning biologist who mapped the neural anatomy of insects in the decades before World War I, likened the minute circuitry of their vision-processing neurons to an exquisite pocket watch. He likened that of mammals, by comparison, to a hollow-chested grandfather clock. Indeed, it is humbling to think that a honeybee, with its milligram-size brain, can perform tasks such as navigating mazes and landscapes on a par with mammals. At the other extreme, an elephant, with its five-million-fold larger brain, suffers the inefficiencies of a sprawling Mesopotamian empire. Select an option below: Customer Sign In *You must have purchased this issue or have a qualifying subscription to access this content

Sinister Sites: The Georgia Guidestones The Georgia Guidestones is a mysterious monument on which are carved ten “commandments” for a “New Age of Reason”. The first commandment? Maintaining the world population under 500 million people. Another sinister fact: the authors of what we now call the American Stonehenge are still a “mystery”… except for those in the know. We will look at the numerous features of this monument, its message calling for a New World Order and explain how it is the work of an occult secret society. The Georgia Guidestones is an enigmatic granite monument situated in Elbert County, Georgia. The Monument Quietly standing in Elberton county, the Guidestones will probably gain in relevancy in the next years Made of Pyramid blue granite, the Georgia Guidestones are meant to withstand the test of time and to communicate knowledge on several levels: philosophically, politically, astronomically, etc. Source: Wired Astronomical features are of a great importance in the design of the Guidestones. 1. R.C.

Project MKULTRA Declassified MKUltra documents Project MKUltra — sometimes referred to as the CIA's mind control program — was the code name given to an illegal and clandestine program of experiments on human subjects, designed and undertaken by the U.S. Central Intelligence Agency (CIA). The scope of Project MKUltra was broad, with research undertaken at 80 institutions, including 44 colleges and universities, as well as hospitals, prisons and pharmaceutical companies.[10] The CIA operated through these institutions using front organizations, although sometimes top officials at these institutions were aware of the CIA's involvement.[11] As the Supreme Court later noted, MKULTRA was: concerned with "the research and development of chemical, biological, and radiological materials capable of employment in clandestine operations to control human behavior." Project MKUltra was first brought to public attention in 1975 by the Church Committee of the U.S. Background[edit] Dr. Precursor experiments[edit]