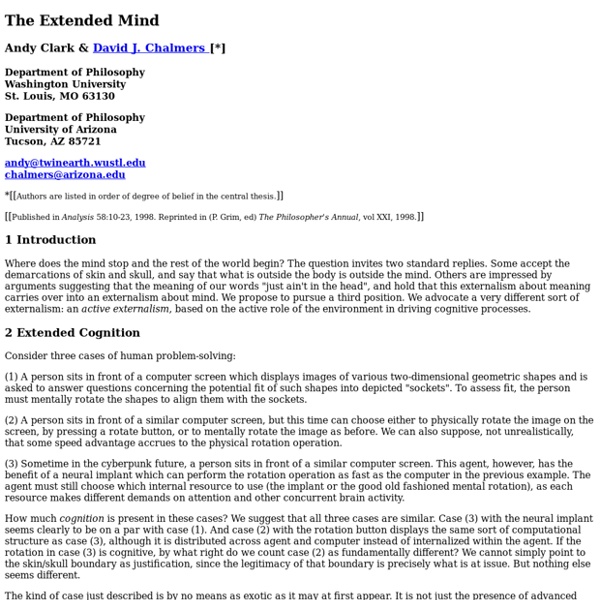 The Brain Story | Documentary Heaven | Watch Free Documentaries Online Why do we think and feel as we do? For years man has sought to understand the workings of the mind. Now, with advances in modern-day technology and developments in neuroscience, a whole new world of brain research is opening up. Understanding our minds is becoming a reality. Guided by top neuroscientist Susan Greenfield, Brain Story attempts to answer the question “What is my mind and who am I?” All in the Mind. In the Heat of the Moment. The Mind’s Eye. First Among Equals. Growing the Mind. The Final Mystery.

Out of Our Brains The Stone is a forum for contemporary philosophers and other thinkers on issues both timely and timeless. Where is my mind? The question — memorably posed by rock band the Pixies in their 1988 song — is one that, perhaps surprisingly, divides many of us working in the areas of philosophy of mind and cognitive science. Look at the science columns of your daily newspapers and you could be forgiven for thinking that there is no case to answer. We are all familiar with the colorful “brain blob” pictures that show just where activity (indirectly measured by blood oxygenation level) is concentrated as we attempt to solve different kinds of puzzles: blobs here for thinking of nouns, there for thinking of verbs, over there for solving ethical puzzles of a certain class, and so on, ad blobum. (In fact, the brain blob picture has seemingly been raised to the status of visual art form of late with the publication of a book of high-octane brain images. ) But then again, maybe not. Where is my mind?

Neurotheology: This Is Your Brain On Religion Principles of NeurotheologyBy Andrew B. NewbergPaperback, 284 pagesAshgateList price: $29.95 "Neurotheology" is a unique field of scholarship and investigation that seeks to understand the relationship specifically between the brain and theology, and more broadly between the mind and religion. As a topic, neurotheology has garnered substantial attention in the academic and lay communities in recent years. Several books have been written addressing the relationship between the brain and religious experience and numerous scholarly articles have been published on the topic. If neurotheology is to be considered a viable field going forward, it requires a set of clear principles that can be generally agreed upon and supported by both the theological or religious perspective and the scientific one as well. It is important to infuse throughout the principles of neurotheology the notion that neurotheology requires an openness to both the scientific as well as the spiritual perspectives. 1. 2.

Can't relax? It's all in your mind: Research shows stopping a thought puts more strain on the brain (PhysOrg.com) -- Turns out, relaxing is exhausting—which could by why so many people struggle to unplug from work during vacation. According to mathematicians at Case Western Reserve University, stopping a thought burns more energy than thinking-like stopping a truck on a downhill slope. "Maybe this explains why it is so tiring to relax and think about nothing," says Daniela Calvetti, professor of mathematics and one of the authors of a new brain study published in an advanced online publication of the Journal of Cerebral Blood Flow & Metabolism. Since opening up the brain for detailed monitoring isn't exactly practical, Calvetti teamed up with fellow mathematics professor Erkki Somersalo and Rossana Occhipinti, a postdoctoral researcher in physiology and biophysics, to create a computer model of brain metabolism. Calvetti and Somersalo created a software package specifically designed to study the complex metabolic systems.

Body of Thought: How Trivial Sensations Can Influence Reasoning, Social Judgment and Perception Why do we look up to those we respect, stoop to the level of those we disdain and think warmly about those we love? Why do we hide dirty secrets or wash our hands of worries? Why do we ponder weighty subjects and feel a load lift after we have made a decision? Why do we look back on the past and forward to the future? Such turns of phrase, invoking a physical reality that stands in for intangible concepts, might seem like linguistic flights of fancy. But a rapidly growing body of research indicates that metaphors joining body and mind reflect a central fact about the way we think: the mind uses the body to make sense of abstract concepts. Select an option below: Customer Sign In *You must have purchased this issue or have a qualifying subscription to access this content

120 Ways to Boost Your Brain Power Here are 120 things you can do starting today to help you think faster, improve memory, comprehend information better and unleash your brain’s full potential. Solve puzzles and brainteasers.Cultivate ambidexterity. Use your non-dominant hand to brush your teeth, comb your hair or use the mouse. Write with both hands simultaneously. Switch hands for knife and fork.Embrace ambiguity. Readers’ Contributions Dance! Contribute your own tip! There are many, many ways to keep our brains sharp. Your personal homepage The test assessed a person's reaction time while also looking for erratic answering patterns, and it raised a red flag for those who an MRI scan later found to have dementia-related brain lesions. Scientists at the Australian National University (ANU) have been able to use a computer-based test to gauge a person’s brain health, according to a new study. "Although we cannot be certain that these middle-aged people will go on to get dementia, the results are important for several reasons," News.com.au quoted professor David Bunce as saying. “Although the presence of the lesions was confirmed through MRI scans, we were able to predict those persons who had them through very simple-to-administer tests," he added. The research took in almost 430 men and women, aged 44 to 48 and many based in the Canberra area, and less than 10% were found to have the lesions. It was very low cost and could be performed during a standard doctor's check-up.

Daily dose of beet juice promotes brain health in older adults Researchers for the first time have shown that drinking beet juice can increase blood flow to the brain in older adults -- a finding that could hold great potential for combating the progression of dementia. The research findings are available online in Nitric Oxide: Biology and Chemistry, the peer-reviewed journal of the Nitric Oxide Society and will be available in print soon. "There have been several very high-profile studies showing that drinking beet juice can lower blood pressure, but we wanted to show that drinking beet juice also increases perfusion, or blood flow, to the brain," said Daniel Kim-Shapiro, director of Wake Forest University's Translational Science Center; Fostering Independence in Aging. "There are areas in the brain that become poorly perfused as you age, and that's believed to be associated with dementia and poor cognition." The next day, following another 10-hour fast, the subjects returned to the lab, where they ate their assigned breakfasts.