The neuroscientific study of hallucinogens 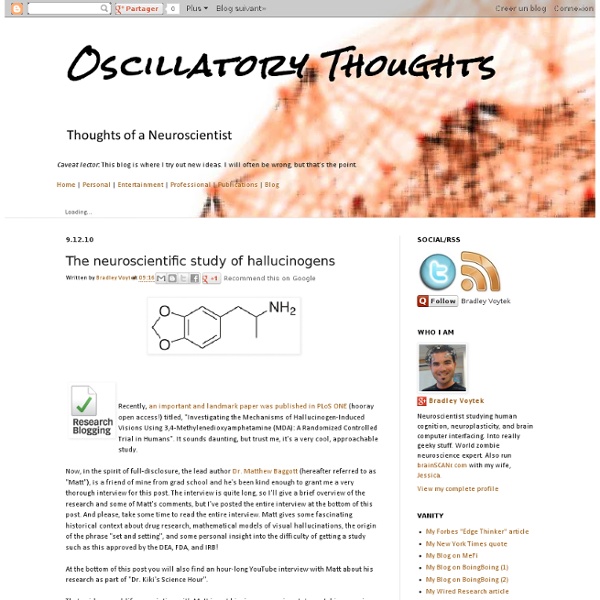 Recently, an important and landmark paper was published in PLoS ONE (hooray open access!) titled, "Investigating the Mechanisms of Hallucinogen-Induced Visions Using 3,4-Methylenedioxyamphetamine (MDA): A Randomized Controlled Trial in Humans". It sounds daunting, but trust me, it's a very cool, approachable study. Now, in the spirit of full-disclosure, the lead author Dr. Matthew Baggott (hereafter referred to as "Matt"), is a friend of mine from grad school and he's been kind enough to grant me a very thorough interview for this post. At the bottom of this post you will also find an hour-long YouTube interview with Matt about his research as part of "Dr. That said, my real-life association with Matt is not biasing my opening statement; his paper is truly landmark for many reasons. [T]here is a staggering diversity of hallucinogens out there: hundreds of compounds, each affecting different combinations of binding sites in the brain. I think you hit the nail on the head.

The fine dopamine line between creativity and schizophrenia | Sc New research shows a possible explanation for the link between mental health and creativity. By studying receptors in the brain, researchers at the Swedish medical university Karolinska Institutet have managed to show that the dopamine system in healthy, highly creative people is similar in some respects to that seen in people with schizophrenia. High creative skills have been shown to be somewhat more common in people who have mental illness in the family. Creativity is also linked to a slightly higher risk of schizophrenia and bipolar disorder. Certain psychological traits, such as the ability to make unusual pr bizarre associations are also shared by schizophrenics and healthy, highly creative people. "The study shows that highly creative people who did well on the divergent tests had a lower density of D2 receptors in the thalamus than less creative people," says Dr Ullén.

Le webinet des curiosités Brainwave/Cymatic Frequency Listing This is a listing of frequencies that various parties have claimed can affect the human mind or body in some way. The following sorts of frequencies are included : Brainwave Frequencies - These are frequencies associated with various mental states. Using brainwave entrainment, you can coax your brainwaves to a certain frequency, and in doing so, achieve the mental state associated with that frequency. The original page that I began building this compiled information from is (*archived copy*) The information in green is from this original page. If you want to redistribute this, please include the Bibliography page as well -- the original sources deserve their reference. Disclaimer : I wouldn't take everything you read on this list for granted. Sincerely, Michael Triggs lunarsight@verizon.net CYCLES PER SECOND (HERTZ), and Correspondences to MENTAL STATES, PHYSIOLOGY, COLORS, NOTES & PLANETS 0.9 Euphoria [SS]

Scientists Can Read Minds with Brain Scans By scanning your brain, scientists can tell what memory you are recalling. Scientists have made impressive gains recently when it comes to reading minds. For instance, through brain scans, researchers can tell what number a person has just seen, figure out what letters a person wants to type, and determine where people were standing within virtual reality environments. To see if they could discern even more complex information during mind-reading, scientists more recently had 10 volunteers watch three films, each seven-seconds long and featuring a different actress in a fairly similar everyday scenario on a typical urban street. For instance, in one movie, a woman rifled through her purse to find an envelope she then dropped into a mailbox, while in another, an actress finished her cup of coffee, which she then dropped into a trashcan. In these experiments, the researchers exposed volunteers to movies roughly an hour before scanning took place.

Colour my world Colour does not exist. Not out in the world at any rate. All that exists in the world is a smooth continuum of light of different wavelengths. Colour is a construction of our brains. Colour discrimination begins with the absorption of light of different wavelengths. Colour information only arises by comparing the responses of multiple cone cells. The L/M system evolved much more recently, due to a gene duplication that occurred in the lineage of Old World primates, probably around 40 million years ago. All of this raises an important question – how are the inputs to these different cone cells compared? This has been known for quite a long time now. The new study by Field and colleagues worked out in breathtaking detail the circuitry of the retina at a cellular level. Their results reveal exactly such a bias and further show that it cannot be explained simply by random clumping of L or M cones in the photoreceptor array. Amazingly, this may extend to humans as well.

The Thirteen Heavens The Thirteen Tones of Evolution The levels of consciousness developed by each Underworld are developed according to a common pattern. The Maya used to describe this by the notion that a special deity or divine force ruled each of the Thirteen Heavens of the various Underworlds and from the Aztecs we have information about what these deities were: General scheme of the divine forces ruling the Thirteen Heavens or the Seven days and Six nights of divine creation The interesting thing about these thirteen deities ruling the thirteen heavens is that if we look at every other deity, the seven with odd-numbers above, we find that they are forces that nurture the development of a seed. The History of the Telecommunications The Development of the Telecommunications Since the strongest creative pulses, displaying the most important steps forward in consciousness, appear during the Seven odd-numbered Heavens we may safely assume that this is what has given rise to the holiness of the number Seven.

Illusions of bodily awareness adapted for the pub : Neurophilosophy DO you think that you perceive your body and the world around you as they really are? If your answer to that question is “yes”, then think again. Our perceptions are little more than the brain’s best guess of the nature of reality, constructed from fragments of information it receives through the senses. This is demonstrated by visual illusions, which produce discrepancies between physical reality and what we see of it, and by illusions of bodily awareness, which distort the way we perceive our bodies. Psychologists and neuroscientists have long used illusions to investigate the mechanisms underlying perception. The first illusion that I have adapted for the pub is the rubber hand illusion. Simply manipulating the sensory information about the hand in this way causes the subject to perceive the felt sensations as originating in the fake hand and not their real one. Photo: Sophia Collins The photograph above shows it was done. Related: References:

American Buddha Online Library Can you think pain away? | Curiosity It's one of the rare things humans would rather have less than more of. Nobody likes pain. Yet pain is an unavoidable consequence of life. We bang our heads and knees on things, we fall down, we break limbs. It would be great to simply think, "Pain be gone!" What's happening is that your body can stimulate the creation of certain pain-relieving opiate neurotransmitters, which block the ascension of some pain signals through your spinal cord. So, yes, we may be able to train our brains to limit pain sensations to some degree.

Why is it hard to master self-knowledge? | Curiosity Self-knowledge reflects each person's definition of who he or she is -- or at least thinks he or she is. It includes physical features, such as height and eye color, as well as more intangible characteristics, such as a person's strengths or beliefs. Given that no one knows more about you than you do, it's surprising just how typical it is for a person to demonstrate a lack of mastery over his or her sense of self. Why is it so hard to master self-knowledge? Social influences and the media represent another obstacle in the path to self-discovery. Perhaps the most important reason that self-knowledge is so hard to master is that we're afraid of what we might find.