Zap of electricity makes you a brighter spark 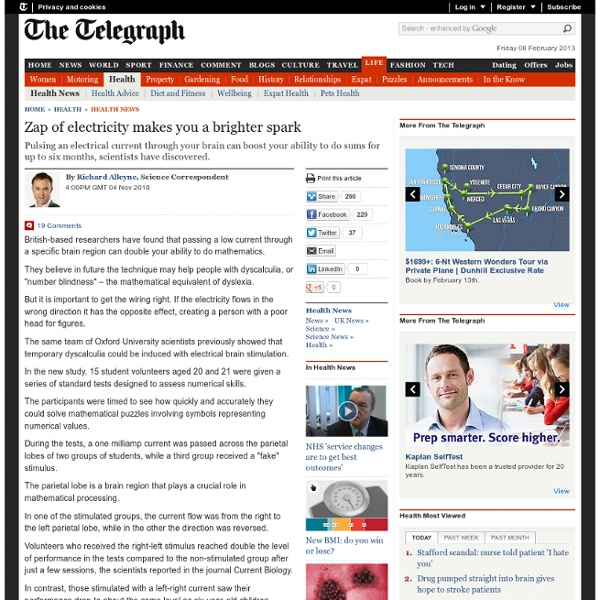 Ways to Improve Human Intelligence - StumbleUpon This briefing is intended to pull into one convenient, single frame of reference a body of key information which currently is scattered across a great many different contexts. Until recently, even the possibility of any such information existing was, for essentially political reasons and funding reasons, denied by most of our institutions, together with most of our educators and psychologists, so that such findings as were made in various contexts and circumstances never got discussed across a broader context. Now that it is evident that the brain, and one's intelligence, are highly changeable and that a wide variety of conditions, arrangements and techniques may be employed to improve both brain functioning and intelligence to even a profound degree, we need to make a start on getting a lot of this key information organized to where you and other inquirers can more readily get at it, understand it, and use it. Menu of Methods Quick Interjection 1. 2. 3. 4. 5. 6. 7. 8. 9. 10.

Health | 'Sarcasm' brain areas discovered Scientists say they have located the parts of the brain that comprehend sarcasm - honestly. By comparing healthy people and those with damage to different parts of the brain, they found the front of the brain was key to understanding sarcasm. Damage to any of three different areas could render individuals unable to understand sarcastic comments. The Israeli team from Haifa University told Neuropsychology how their findings might help to explain autism features. Autistic children can have problems interpreting sarcasm as well as other social cues such as emotions. This same skill is sometimes lost in people with brain damage, suggesting similar brain regions may be involved in autism. Brain scan studies of autistic children have shown that they have different activity in the frontal lobe to other children. Dr Simone Shamay-Tsoory and colleagues studied 25 people with prefrontal lobe damage, 16 with damage to the posterior lobe of the brain and 17 healthy volunteers. Anatomy

Attention Is the Most Basic Form of Love Attention is the most basic form of love. Through it we bless and are blessed. -- John Tarrant There is an epidemic ravaging the health and happiness of American families. We simply have no time for each other. One of the most common relationship concerns we have found in our Marriage Checkup study is that partners stop paying attention to each other in the struggle to accomplish the myriad demands of the day. We are all, so many of us, so monstrously busy on a day-to-day basis that we practically tremble under the strain of it all. We attend to the needs of our children. And then, there are our parents . And it all takes time and attention. And then, finally, sometimes, through the fog, we catch a glimmer. If there is one thing I have learned in working with so many couples over the years, and of course living in my own marriage, it is that marriages don't whine, or squeak, or cry. Good grief! Our attention is pulled and yanked and split. And through it all, there is our marriage.

120 Ways to Boost Your Brain Power Here are 120 things you can do starting today to help you think faster, improve memory, comprehend information better and unleash your brain’s full potential. Solve puzzles and brainteasers.Cultivate ambidexterity. Use your non-dominant hand to brush your teeth, comb your hair or use the mouse. Readers’ Contributions Dance! Contribute your own tip! There are many, many ways to keep our brains sharp. Russians Will Be First To Explore Untouched Antarctic Lake Vostok, In Hunt For Weird Life Forms An oxygen-rich lake, unreachable for the past 14 million years and buried beneath a thick sheet of ice, is about to be penetrated by a drill bit from a faraway place. It's possible that special life forms have adapted to live in this extreme environment, and scientists hope to learn more once they can analyze water samples. No, sorry, it's not on Europa — it's in Antarctica. But the environment of Lake Vostok, which Russian scientists are about to drill open, is very similar to that Jovian moon and to Enceladus, a frozen satellite of Saturn. The Antarctic Treaty Secretariat, a body set up to protect the frozen continent, approved a Russian team's process to extract water from the lake while preventing contamination, according to New Scientist. The lake's water pressure will push the drilling fluid up into the borehole, where it will freeze. No one is sure where the ice-water boundary lies, so scientists are not sure when they'll break through. [New Scientist via Wired UK]

Learning Styles - My Learning Style - Global and Holistic Learning Do you relate to the nutty professor? There are many differences of opinion when it comes to cognitive styles. Some researchers support the notion of holistic and analytic learners. We sometimes refer to holistic learners as the student type who is deep and contemplative. Holistic brains like to take their time learning—they like to dwell on information and make constant mental comparisons when they encounter new material. Because of the constant "thinking about thinking," holistic brain types seem to be frustratingly slow when it comes to answering questions. But holistic learners shouldn't get too frustrated by the seemingly slow process of learning. Once you decide you are a holistic learner, you can use your strengths to improve your study skills. Are You a Holistic or Global Learner? A holistic (big picture) person likes to start with a big idea or concept, then go on to study and understand the parts. Some holistic learners tend to glaze over material to pursue the big idea.

Is love an addiction In the early days of a new romance, it's oh so easy to let friends, work and other areas of your life fall by the wayside as you spend all of your time focused on your new love. In many ways, this all-consuming love can be a lot like an addiction, with each condition characterized by a lack of control, or even a sense of obsession. When psychiatrist Donatella Marazziti studied the brain chemistry of people in love, she found that the levels of serotonin in their brains were much lower than normal [source: BBC]. In fact, people in love exhibited the same low serotonin levels as people with obsessive-compulsive disorders. Fortunately, when Marazziti tested the same subjects a year later, she found that serotonin levels had returned to normal for the couples involved in her study. Of course, this doesn't mean that relationships can't last well past the one-year mark. But what about those who can't seem to find love that lasts?