Math Run - how fast is your brain? A simple Brain Training Game for everyone 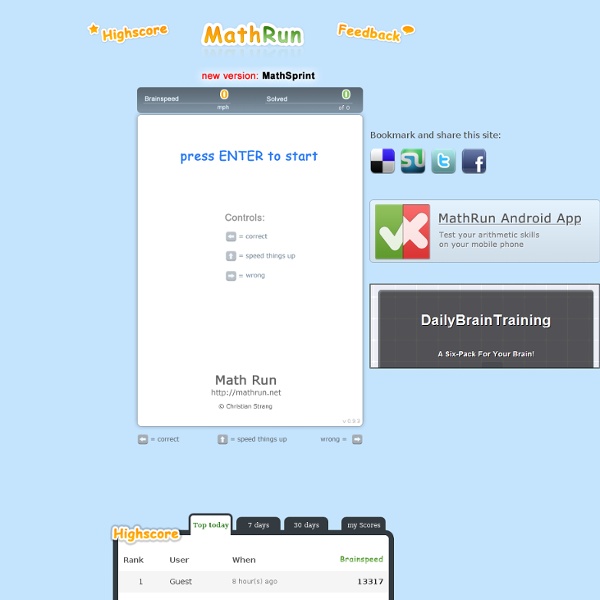 Blue Brain Project Daily dose of beet juice promotes brain health in older adults Researchers for the first time have shown that drinking beet juice can increase blood flow to the brain in older adults -- a finding that could hold great potential for combating the progression of dementia. The research findings are available online in Nitric Oxide: Biology and Chemistry, the peer-reviewed journal of the Nitric Oxide Society and will be available in print soon. "There have been several very high-profile studies showing that drinking beet juice can lower blood pressure, but we wanted to show that drinking beet juice also increases perfusion, or blood flow, to the brain," said Daniel Kim-Shapiro, director of Wake Forest University's Translational Science Center; Fostering Independence in Aging. High concentrations of nitrates are found in beets, as well as in celery, cabbage and other leafy green vegetables like spinach and some lettuce. The next day, following another 10-hour fast, the subjects returned to the lab, where they ate their assigned breakfasts.

The Template Org | Sacred Geometry, Sacred Ceremony & DNA Controlling Computers with Your Mind November 8, 2010 Scientists used a brain-computer interface to show how the activity of just a few brain cells can control the display of pictures on a computer screen. The finding sheds light on how single brain cells contribute to attention and conscious thought. Patients were asked to focus on 1 of 2 superimposed images, here of Michael Jackson and Marilyn Monroe. Researchers have been making great progress in developing brain-computer interfaces—devices that let a person's thoughts guide the actions of a computer. A team of scientists led by Dr. The scientists recruited 12 patients with drug-resistant epilepsy. In a previous study, the researchers found that individual brain cells respond more strongly to certain images than to others. For this study, the scientists first identified neurons in each person that responded selectively to 4 different images. The results appeared in the October 28, 2010, issue of Nature.

The Revolution in Alternative Healing | The Living Matrix Out of Our Brains The Stone is a forum for contemporary philosophers and other thinkers on issues both timely and timeless. Where is my mind? The question — memorably posed by rock band the Pixies in their 1988 song — is one that, perhaps surprisingly, divides many of us working in the areas of philosophy of mind and cognitive science. There is no limit, it seems, to the different tasks that elicit subtly, and sometimes not so subtly, different patterns of neural activation. As our technologies become better adapted to fit the niche provided by the biological brain, they become more like cognitive prosthetics. But then again, maybe not. Is it possible that, sometimes at least, some of the activity that enables us to be the thinking, knowing, agents that we are occurs outside the brain? The idea sounds outlandish at first. Hiroko Masuike for The New York Times“Brain Cloud (2010)” on display at the Metropolitan Museum of Art in New York as part of a show by John Baldessari. Such an idea is not new.