Out of Our Brains 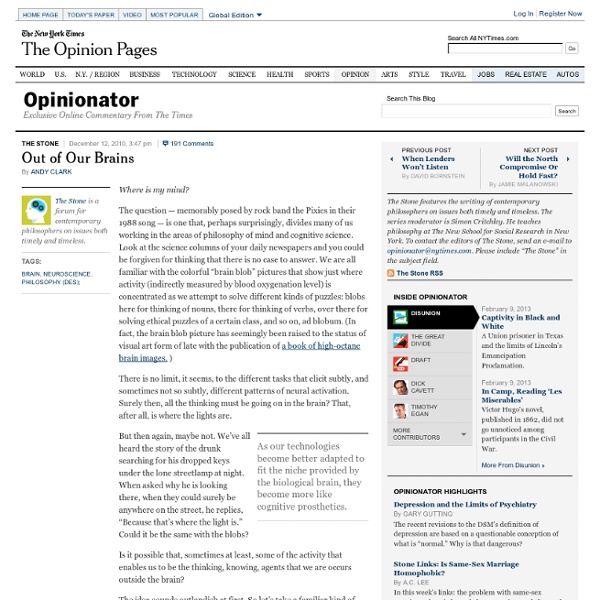 The Stone is a forum for contemporary philosophers and other thinkers on issues both timely and timeless. Where is my mind? The question — memorably posed by rock band the Pixies in their 1988 song — is one that, perhaps surprisingly, divides many of us working in the areas of philosophy of mind and cognitive science. Look at the science columns of your daily newspapers and you could be forgiven for thinking that there is no case to answer. There is no limit, it seems, to the different tasks that elicit subtly, and sometimes not so subtly, different patterns of neural activation. As our technologies become better adapted to fit the niche provided by the biological brain, they become more like cognitive prosthetics. But then again, maybe not. Is it possible that, sometimes at least, some of the activity that enables us to be the thinking, knowing, agents that we are occurs outside the brain? The idea sounds outlandish at first. Such an idea is not new. Please don’t get me wrong.

Neurotheology: This Is Your Brain On Religion Principles of NeurotheologyBy Andrew B. NewbergPaperback, 284 pagesAshgateList price: $29.95 "Neurotheology" is a unique field of scholarship and investigation that seeks to understand the relationship specifically between the brain and theology, and more broadly between the mind and religion. If neurotheology is to be considered a viable field going forward, it requires a set of clear principles that can be generally agreed upon and supported by both the theological or religious perspective and the scientific one as well. It is important to infuse throughout the principles of neurotheology the notion that neurotheology requires an openness to both the scientific as well as the spiritual perspectives. In short, for neurotheology to be successful, science must be kept rigorous and religion must be kept religious. When considering the primary reasons for developing neurotheology as a field, we can consider four foundational goals for scholarship in this area. 1. 2. 3. 4.

10 Websites With Fun Tests To Gauge Your IQ Intelligence Quotient (IQ) is a term that’s related to the wattage of your brain; in short intelligence and reasoning skills measured across a few standardized tests. Before an inferiority complex starts laying its foundation, remember that I.Q is not a measure of knowledge or its practical application. To rub our egos the right way, you might take a few serious approved tests and arrive at your IQ. Me? I don’t want to find out where I end up on the dunce scale, so I usually head to these fun tests to gauge my IQ. FunEducation Try out the array of tests on this site which include a range of serious self discovery tools and fun quizzes. 3SmartCubes If you are looking for a range of tests that measure everything from IQ to your EQ (Emotional Quotient), then this site deserves to be bookmarked. Free IQ Test Just like the name says, this site is a place for a fast, free, and accurate online IQ test. IQ League own system to score you, so it’s more of a fun IQ test rather than a scientific one.

Brain mechanism recruited to reduce noise during challenging tasks New research reveals a sophisticated brain mechanism that is critical for filtering out irrelevant signals during demanding cognitive tasks. The study, published by Cell Press in the February 26 issue of the journal Neuron, also provides some insight into how disruption of key inhibitory pathways may contribute to schizophrenia. "The ability to keep track of information and one's actions from moment to moment is necessary to accomplish even the simple tasks of everyday life," explains senior study author, Dr. Dr. "The primate dorsolateral prefrontal cortex (DLPFC) and anterior cingulated cortex (ACC) are brain regions that focus attention on relevant signals and suppress noise in cognitive tasks. The researchers found that a pathway linking two related prefrontal areas within DLPFC and a pathway from the functionally distinct ACC to DLPFC similarly innervated excitatory neurons associated with paying attention to relevant stimuli. Source: Cell Press

Can't relax? It's all in your mind: Research shows stopping a thought puts more strain on the brain (PhysOrg.com) -- Turns out, relaxing is exhausting—which could by why so many people struggle to unplug from work during vacation. According to mathematicians at Case Western Reserve University, stopping a thought burns more energy than thinking-like stopping a truck on a downhill slope. "Maybe this explains why it is so tiring to relax and think about nothing," says Daniela Calvetti, professor of mathematics and one of the authors of a new brain study published in an advanced online publication of the Journal of Cerebral Blood Flow & Metabolism. Since opening up the brain for detailed monitoring isn't exactly practical, Calvetti teamed up with fellow mathematics professor Erkki Somersalo and Rossana Occhipinti, a postdoctoral researcher in physiology and biophysics, to create a computer model of brain metabolism. Calvetti and Somersalo created a software package specifically designed to study the complex metabolic systems.

The Brain Story | Documentary Heaven | Watch Free Documentaries Online Why do we think and feel as we do? For years man has sought to understand the workings of the mind. Now, with advances in modern-day technology and developments in neuroscience, a whole new world of brain research is opening up. Understanding our minds is becoming a reality. All in the Mind. In the Heat of the Moment. The Mind’s Eye. First Among Equals. Growing the Mind. The Final Mystery.

Use Your Hyperactive Brain to Lose Weight Those who live by impulse eat by impulse. Eating compulsively is a main cause of obesity in many adults with ADD/ADHD. I have found that the condition is five times more prevalent among overeaters than in the general population. Just as ADD/ADHD adults may struggle to understand what someone is saying, they have difficulty interpreting what their bodies are telling them. They mistake feeling upset (or bored) for feeling hungry. I’ve come up with tips specifically designed for ADD/ADHD overeaters. Use Your Hyperactive Brain to Lose Weight Having ADD/ADHD is like having a good engine and lousy brakes. Don't Expect to Be Able to Resist Food Temptations Try to avoid them instead. Take Time to Exercise Do what doesn’t come naturally, when you feel a slump in energy or mood. Avoid Boredom and Stimulate Your Brain Get your minimum daily requirement of stimulation. Schedule When You Eat People with ADD/ADHD are often unaware of their feelings. Pay Attention to the Experience of Eating

Embodied Cognition  Embodied Cognition is a growing research program in cognitive science that emphasizes the formative role the environment plays in the development of cognitive processes. The general theory contends that cognitive processes develop when a tightly coupled system emerges from real-time, goal-directed interactions between organisms and their environment; the nature of these interactions influences the formation and further specifies the nature of the developing cognitive capacities. Since embodied accounts of cognition have been formulated in a variety of different ways in each of the sub-fields comprising cognitive science (that is, developmental psychology, artificial life/robotics, linguistics, and philosophy of mind), a rich interdisciplinary research program continues to emerge. Table of Contents 1. 2. To say that cognition is embodied means that it arises from bodily interactions with the world. a. i. Hannah’s problem was different from Gabriel’s, but it was also the same. ii.