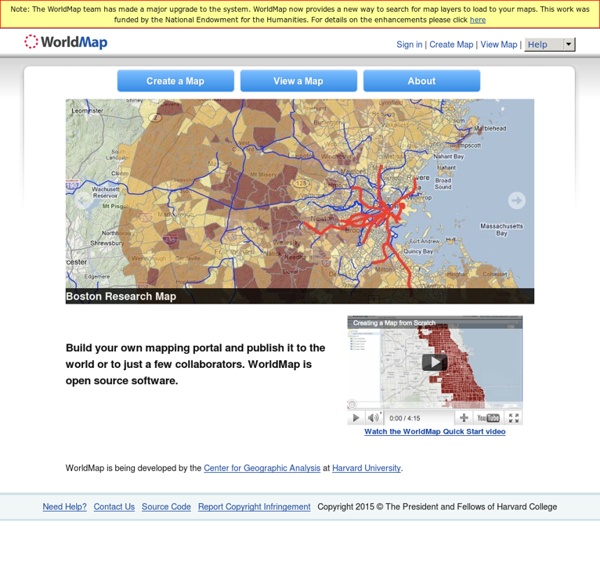 What is the Spatial Turn? · Spatial Humanities “Landscape turns” and “spatial turns” are referred to throughout the academic disciplines, often with reference to GIS and the neogeography revolution that puts mapping within the grasp of every high-school student. By “turning” we propose a backwards glance at the reasons why travelers from so many disciplines came to be here, fixated upon landscape, together. For the broader questions of landscape – worldview, palimpsest, the commons and community, panopticism and territoriality — are older than GIS, their stories rooted in the foundations of the modern disciplines. These terms have their origin in a historic conversation about land use and agency. Read the Introduction.

Alpage ALPAGE (diachronic analysis of the Paris urban area: a geomatic approach) is a research program coordinated by Hélène Noizet (LAMOP), which is supported by the ANR. Based on the association of 4 laboratories, and collaboration of many partners, it brings together some twenty researchers or academics in humanities, social sciences and communication studies. These historians, geomaticians and computer scientists are building a geographic information system (GIS) about the pre-industrial Parisian area.

Palladio Palladio is a toolset for easy upload and careful investigation of data. It is an intertwined set of visualizations designed for complex, multi-dimensional data. It is a product of the "Networks in History" project that has its roots in another humanities research project based at Stanford: Mapping the Republic of Letters (MRofL). Stunning Subjectivity: Paula Scher's Obsessive Hand-Painted Maps by Maria Popova An irreverent, artful antidote to GPS appification, or what the NYC subway has to do with tsunamis. Iconic designer Paula Scher is one of my big creative heroes, her thoughts on combinatorial creativity a perfect articulation of my own beliefs about how we create. Since the early 1990s, Scher has been creating remarkable, obsessive, giant hand-painted typographic maps of the world as she sees it, covering everything from specific countries and continents to cultural phenomena. This month, Princeton Architectural Press is releasing Paula Scher: MAPS — a lavish, formidable large-format volume collecting 39 of her swirling, colorful cartographic points of view, a beeline addition to my favorite books on maps.

Gridded Population of the World - GPW v3 Introduction Note: "Gridded Population of the World, v4" is now available and supersedes GPWv3. GPWv4 provides gridded population estimates with an output resolution of 30 arc-seconds (approximately 1 km at the equator) for the years 2000, 2005, 2010, 2015, and 2020 based on the results of the 2010 round of censuses, which occurred between 2005 and 2014. For more details about GPWv4 and to access the new data see GPWv3 depicts the distribution of human population across the globe. Trailblazing The story of the Royal Society is the story of modern science. Our origins lie in a 1660 ‘invisible college’ of natural philosophers and physicians. Today we are the UK’s national science academy and a Fellowship of some 1,600 of the world’s most eminent scientists. Nullius in verba The very first ‘learned society’ meeting on 28 November 1660 followed a lecture at Gresham College by Christopher Wren. Joined by other leading polymaths including Robert Boyle and John Wilkins, the group soon received royal approval, and from 1663 it would be known as 'The Royal Society of London for Improving Natural Knowledge'.

Exploring Big Historical Data: The Historian's Macroscope Welcome to the companion site for Exploring Big Historical Data: The Historian’s Macroscope, published by Imperial College Press. If you want to buy a copy, you can purchase one for $39.00 USD. Feel free to visit our original live-written fully open draft website, which is still online – and if you like what you see, you can always buy the book! On this site you will find code, essays (things we liked from the draft that did not fit), and datafiles that go with our book.