You're not going to believe what I'm about to tell you 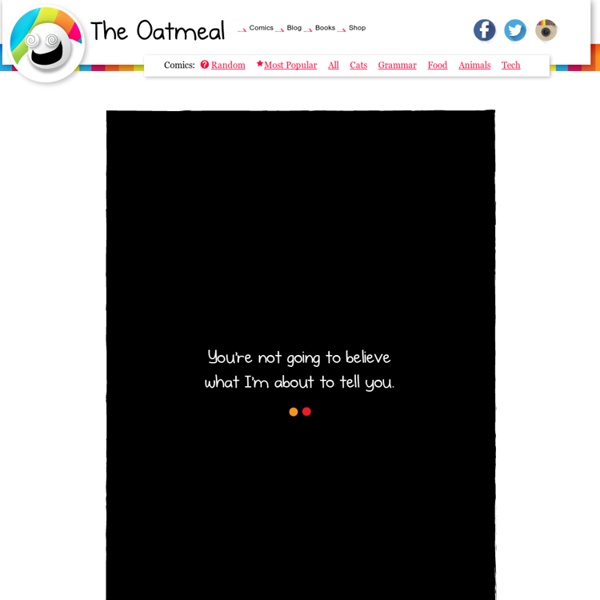 Comics Blog Books Shop Comics: Random Most Popular All Cats Grammar Food Animals Tech This is a comic about the backfire effect. Inspiration This comic was inspired by this three-part series on the backfire effect from the You Are Not So Smart Podcast. USC Creativity and Brain Institute Neural correlates of maintaining one’s political beliefs in the face of counterevidence By Sarah Gimbel and Sam Harris. Other fun reading Reddit - Change My View Wikipedia's list of common misconceptions Sources You Are Not So Smart Website Podcast USC Creativity and Brain institute Wooden teeth Slave teeth Napoleon Thomas Crapper Houseflies Exploding in a vacuum Jesus's birthday The Pledge of Allegiance Roe v. Latest Things Random Comics Home Quizzes About Contact All artwork and content on this site is Copyright © 2016 Matthew Inman.

Refusing to act on climate change will cost future generations $530 trillion (at least) - Techly By continuing to delay significant reductions in greenhouse gas emissions, we risk handing young people alive today a bill of up to US$535 trillion. This would be the cost of the “negative emissions” technologies required to remove CO₂ from the air in order to avoid dangerous climate change. These are the main findings of new research published in Earth System Dynamics, conducted by an international team led by US climate scientist James Hansen, previously the director of NASA’s Goddard Institute for Space Studies. The Paris Agreement in 2015 saw the international community agree to limit warming to within 2°C. The Hansen team argue that the much safer approach is to reduce atmospheric concentrations of CO₂ from the current annual average of more than 400ppm (parts per million) back to 1980s levels of 350ppm. This is a moderately more ambitious goal than the aspiration announced in Paris to further attempt to limit warming to no more than 1.5°C.

A Primer: What Is Net Neutrality — Why All the Fuss? The battle over net neutrality is once again heating up. Earlier today, Federal Communications Commission Chairman Ajit Pai announced that he wants to scrap a rule passed by the FCC in 2015. In an interview with Reason magazine, Pai said, “Going forward, my hope is that in a more free market, light touch environment, we can figure out what the right regulatory framework is to preserve those core protections of a free and open internet.” Not everyone has followed this somewhat complicated issue. Here, then, is a primer for understanding what’s at stake in the fight for an open Internet.

A case study in combating bias Following several disappointing investments, the German electric utility RWE overhauled its decision-making processes. Learn how from the CFO who spearheaded the effort. The Quarterly: Tell us a bit about the circumstances that motivated RWE’s management to undertake a broad debiasing operation. Bernhard Günther: In the second half of the last decade, we spent more than €10 billion on big capital-expenditure programs and acquisitions in conventional power plants. In the business cases underlying these decisions, we were betting on the assumptions of ever-rising commodity prices, ever-rising power prices. Taking Notes By Hand May Be Better Than Digitally, Researchers Say Laptops are common in lecture halls worldwide. Students hear a lecture at the Johann Wolfang Goethe-University on Oct. 13, 2014, in Frankfurt am Main, Germany. Thomas Lohnes/Getty Images hide caption

Winning Images from the Underwater Photographer of the Year Contest ‘Dancing Octopus’ by Gabriel Barathieu (France). Winner, Underwater Photographer of the Year.“In the lagoon of Mayotte, during spring low tides, there is very little water on the flats. Only 30 cm in fact. That’s when I took this picture. I had to get as close as possible to the dome to create this effect. The tricks propagandists use to beat science Back in the 1950s, health professionals became concerned that smoking was causing cancer. Then, in 1952, the popular magazine Reader’s Digest published “Cancer by the Carton,” an article about the increasing body of evidence that proved it. The article caused widespread shock and media coverage. Today the health dangers of smoking are clear and unambiguous. And yet smoking bans have been slow to come into force, most having appeared some 40 years or more after the Reader’s Digest article. The reason for this sluggishness is easy to see in hindsight and described in detail by Naomi Oreskes and Erik Conway in their 2010 book Merchants of Doubt.

Key findings about U.S. immigrants The U.S. has more immigrants than any other country in the world. Today, more than 40 million people living in the U.S. were born in another country, accounting for about one-fifth of the world’s migrants in 2015. The population of immigrants is also very diverse, with just about every country in the world represented among U.S. immigrants. Pew Research Center regularly publishes statistical portraits of the nation’s foreign-born population, which include historical trends since 1960. Based on these portraits, here are answers to some key questions about the U.S. immigrant population.

Cognitive bias cheat sheet – Better Humans You don’t have to. But you can start by remembering these four giant problems our brains have evolved to deal with over the last few million years (and maybe bookmark this page if you want to occasionally reference it for the exact bias you’re looking for): Information overload sucks, so we aggressively filter. Noise becomes signal.Lack of meaning is confusing, so we fill in the gaps. Signal becomes a story.Need to act fast lest we lose our chance, so we jump to conclusions.

The book that fights sexism with science When young men and women come up against sexist stereotypes masquerading as science, Angela Saini wants them to be armed with the facts. “I call my book ammunition,” she says of her 288-page prize-winning work Inferior: The True Power of Women and the Science that Shows It. “There are people out there who insist that somehow the inequalities we see in society are not just because of historic discrimination, but also because of biology – the idea that there are factors within us that will cause men or women to be better at some things than others.”

Climate change will displace millions Wildfires tearing across Southern California have forced thousands of residents to evacuate from their homes. Even more people fled ahead of the hurricanes that slammed into Texas and Florida earlier this year, jamming highways and filling hotels. A viral social media post showed a flight-radar picture of people trying to escape Florida and posed a provocative question: What if the adjoining states were countries and didn’t grant escaping migrants refuge? By the middle of this century, experts estimate that climate change is likely to displace between 150 and 300 million people. If this group formed a country, it would be the fourth-largest in the world, with a population nearly as large as that of the United States.