Who Owns the Media? 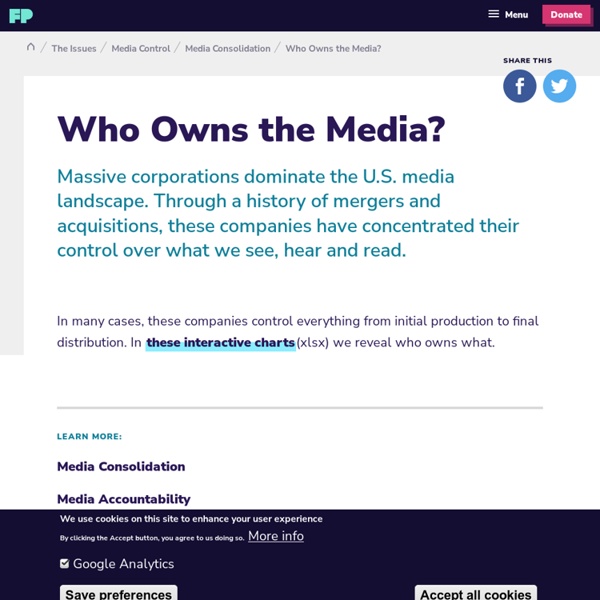 We Can’t Let John Deere Destroy the Very Idea of Ownership It’s official: John Deere and General Motors want to eviscerate the notion of ownership. Sure, we pay for their vehicles. But we don’t own them. Not according to their corporate lawyers, anyway. Examples of Media Bias May 2016 5/25/2016 - U.S. Hits Record: 127 Months Since Major Hurricane - CNS News 5/18/2016 - CNN report on Syrian Christians Notorious Mercenary Erik Prince Is Advising Trump From the Shadows Erik Prince, America’s most notorious mercenary, is lurking in the shadows of the incoming Trump administration. A former senior U.S. official who has advised the Trump transition told The Intercept that Prince has been advising the team on matters related to intelligence and defense, including weighing in on candidates for the defense and state departments. The official asked not to be identified because of a transition policy prohibiting discussion of confidential deliberations. On election night, Prince’s latest wife, Stacy DeLuke, posted pictures from inside Trump’s campaign headquarters as Donald Trump and Mike Pence watched the returns come in, including a close shot of Pence and Trump with their families. “We know some people who worked closely with [Trump] on his campaign,” DeLuke wrote.

A List of Deadly Terrorist Attacks on U.S. Diplomatic Targets Under President George W. Bush, 2001-2009 Here is a chronology of the deadly terrorist attacks on United States embassies, consulates and traveling U.S. personnel during the presidency of George W. Bush. The list below does not include foiled attacks or those that did not result in fatalities (other than those of the attackers). The descriptions for each incident are excerpted from the University of Maryland's Global Terrorism Database. Dec. 15, 2001: Unidentified assailants gunned down a Nepalese security guard of the U.S. Chinese Officials With Government Access To Every Kind Of Personal Data Are Selling It Online Back in 2015, Techdirt wrote about a government project in China that involves "citizen scores," a rating system that will serve as a measure of a person's political compliance. The authorities aim to do that by drawing on the huge range of personal data that we all generate in our daily use of the Internet. The data would be scooped up from various public and private services and fed into an algorithm to produce an overall citizen score that could be used to reward the obedient and punish the obstreperous. Naively, we might suppose that only authoritarian governments could ever obtain all that highly-revealing information, but an article from supchina.com reveals that is far from the case.

Behind the scenes with a performer in Boston's Blue Man Group One of the signature characteristics of the “Blue Men” performing in the Blue Man Group show, a theatrical performance including music, technology, comedy, and art, is total anonymity. When the three stars of each show don their “bald and blue” — skullcaps and bright azure greasepaint — the actors become virtually unrecognizable. They grow quieter, smile less, and appear to experience each earthly sensation anew. They beat on instruments made out of PVC pipes with reckless abandon. They toss marshmallows into each other’s mouths from impossible distances, making grotesque snowmen out of the chewed-up sugary confections and slipping them into an unassuming theatergoer’s purse.

Trump campaign aims to duplicate 2016 edge on voter data in 2020 The Republican Party has collected 3,000 data points on every voter in the country, say GOP officials. This technological treasure will allow President Donald Trump’s reelection effort to target potential supporters with mail, phone calls, and even door-knock scripts tailored to individuals’ interests. The Democratic Party can’t match this data operation. At least, not yet – Democrats are investing millions in a new data exchange intended to recapture the magic that elected Barack Obama, twice. Welcome to Red versus Blue, data edition. Sophisticated digital operations helped President Trump win in 2016.

Lyle Blaker Update Required To play the media you will need to either update your browser to a recent version or update your Flash plugin. Highlights Male; Voice age range 20-35, General American Accent, excellent at long form narrative and conversational corporate narration.