Breaking the Silence › Israeli soldiers talk about the occupied territories 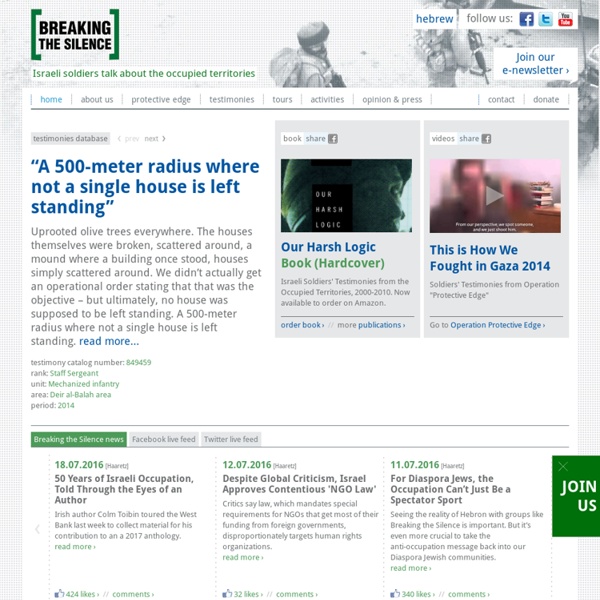 The Folly of World War IV: Wars Are Never Quick, Cheap or Easy This post first appeared at TomDispatch. Secretary of Defense Chuck Hagel, left, and Joint Chiefs of Staff Chairman General Martin Dempsey speak to the press about the ongoing bombing campaign against militants in Iraq and Syria during a news conference at the Pentagon on September 26, 2014 in Arlington, Virginia. (Photo by T.J. Assume that the hawks get their way — that the United States does whatever it takes militarily to confront and destroy ISIS. Answering that question requires taking seriously the outcomes of other recent US interventions in the Greater Middle East. In the wake of the recent attacks in Paris, the American mood is strongly trending in favor of this sort of escalation. In fact, subsequent events in each case mocked early claims of success or outright victory. Indeed, the very existence of the Islamic State (ISIS) today renders a definitive verdict on the Iraq wars over which the Presidents Bush presided, each abetted by a Democratic successor. Not so with Cohen.

The Echoes of 1939 IN AUGUST 1939, two weeks before the start of World War II in Europe, I was admitted to England as an infant refugee. My parents and I got out of Germany, where I was born, at the last moment. Three months earlier, my older sister, then age 10, had been admitted to England along with about 10,000 other unaccompanied Jewish children in what became known as the Kindertransport. When the British admitted us, all other doors were closed. America, for its part, had a restrictive quota system for immigrants that my father saw as lengthy and, thus, hopeless. Some refugees who had fled Germany to other countries in Europe continued to arrive in England even after war broke out. The British dealt with this by sending late arriving adult males to the Isle of Man, in the sea between England and Ireland. Senator Ted Cruz and Jeb Bush say that only Christian Syrians should be admitted. One of those who proposes to exclude all Syrians is Senator Marco Rubio.

After Living in Norway, America Feels Backward. Here's Why. - BillMoyers.com This post originally appeared at TomDispatch and in print in slightly shortened form at The Nation. Some years ago, I faced up to the futility of reporting true things about America’s disastrous wars and so I left Afghanistan for another remote mountainous country far away. It was the polar opposite of Afghanistan: a peaceful, prosperous land where nearly everybody seemed to enjoy a good life, on the job and in the family. It’s true that they didn’t work much, not by American standards anyway. Often I was invited to go along. Four years on, thinking I should settle down, I returned to the United States. Ducking the Subject One night I tuned in to the Democrats’ presidential debate to see if they had any plans to restore the America I used to know. He believes, he added, in “a society where all people do well. But Hillary Clinton quickly countered, “We are not Denmark.” In that debate, no more was heard of Denmark, Sweden or Norway. I was dumbfounded. Why We’re Not Denmark Family Matters

From UK: The phony in American politics Then I’ll get on my knees and prayWe don’t get fooled again.The Who, Won’t Get Fooled Again For most of history we had an excuse. Emperors, pharaohs, czars, kings, queens, sultans, sheiks, they descended on us via peremptory power structures and the vagaries of genetics. If the king was a warmongering dolt or half-mad egomaniac, it wasn’t our, the people’s, fault. American democracy was supposed to change all that. As Trump, Cruz, Clinton, Sanders, and the rest of the 2016 crew tackle the snows and insults of February in pursuit of votes, all the theatrics of authenticity are on display. Let the record reflect: the American people are a bunch of suckers. Flour sales boomed, and Pappy himself was a star, the biggest mass-media celebrity in the south-west and a man with his eye on the next big thing. The effect was electric. The O’Daniel rallies appealed to the same deep human instinct and provided the same emotional outlets which the camp meeting formerly offered.

The Maoism of Donald Trump In February, 1957, eight years after the founding of Communist China and nine years prior to the Cultural Revolution, Chairman Mao Zedong made a speech at the eleventh meeting of the Supreme State Conference, entitled “On the Correct Handling of Contradictions Among the People,” that defined his political philosophy. In the speech—arguably his best known—the Great Helmsman drew a distinction between “the people” and “the enemy.” The people were effectively the in-group, while the enemy was nothing but a collection of demons and thugs to be vigilantly resisted. The us-versus-them dichotomy, a cornerstone of Maoism later enshrined in his Little Red Book, effectively painted the world in black and white, banishing diversity, difference, or considerations of civil liberty. In the United States, Trumpism seems like a chilling wake-up call for members of both parties forced for the first time to confront the deformed dynamics of their sociopolitical system.

We’re Helping Deport Kids to Die I’m mostly a fan of the Obama administration, but this is just plain immoral. As I’ve written previously, the policy was crafted after the United States was swamped by a surge of Central American refugees in early 2014. Obama spoke with the Mexican president to discuss how to address the flow, and Mexico obligingly imposed a crackdown to stop these refugees long before they could reach the United States. Mexico deports a great majority of them to their home countries, and the United States is thus complicit when they are terrorized, raped and murdered. Immigration is among the knottiest of challenges, and there is a real risk that welcoming some children creates an incentive that results in other children endangering their lives by undertaking a perilous journey north. I’m not arguing that the U.S. should open its doors wide to all Central Americans, and Obama in any case is constrained by Congress. These are not primarily economic migrants. Photo Continue reading the main story

JUST IN: President Jimmy Carter Releases INTENSE Message Calling Out Religious Hypocrites (DETAILS) President Jimmy Carter recently blamed much of the world’s violence on religious hypocrisy. On June 21, he told the annual Human Rights Defenders Forum at The Carter Center that “we are at a turning point in history,” choosing between “peace and human suffering.” President Carter spoke about global violence, and more specifically, violence against girls and women. As a conservative Baptist who still teaches a weekly Sunday School class, he may surprise people with his criticism of religion. ‘We must also realize that women are key agents of the changes we need.’ President Carter wants to see more women in leadership roles: ‘Women are excluded from leadership in religion, in family and community decision-making, and in legislatures and other political offices.’ Last week the Nobel Peace laureate spoke to over 60 global activists, offering up a bold solution. We often think of radical mideastern groups’ violence against women, but the U.S. experiences violence against women, too: