Dress For Your Body Shape 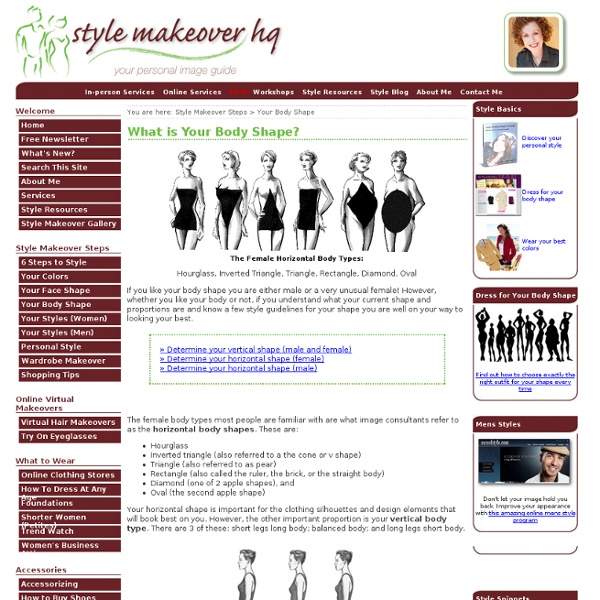 You are here: Style Makeover Steps > Your Body Shape The Female Horizontal Body Types:Hourglass, Inverted Triangle, Triangle, Rectangle, Diamond, Oval If you like your body shape you are either male or a very unusual female! The female body types most people are familiar with are what image consultants refer to as the horizontal body shapes. HourglassInverted triangle (also referred to a the cone or v shape)Triangle (also referred to as pear)Rectangle (also called the ruler, the brick, or the straight body)Diamond (one of 2 apple shapes), andOval (the second apple shape) Your horizontal shape is important for the clothing silhouettes and design elements that will book best on you. The Female Vertical Body Proportions: Short Legs Long Body, Balanced Body, Long Legs Short Body Your vertical proportion is important for the lengths of clothes (both for tops and for bottoms) that will be most flattering on you. Please note... What is the Perfect Shape? So, You Don’t Have The Ideal Shape? Do wear...

Rihanna is Fighting to Trademark Her Own Name — The Fashion Law Rihanna, whose real name is Robyn Rihanna Fenty, is in the midst of a battle with DC Comics to trademark her first name. Turns out, in June 2014, the superstar singer, by way of Roraj Trade LLC (the company that holds the rights to her intellectual property) filed to federally register the term "Robyn" in the class of goods/services in connection with “providing on-line non-downloadable general feature magazines." So, it appears Rihanna wants to use her real name in association with an online magazine venture. Enter: DC Comics, the American comic book giant, which has been responsible for publishing Batman since the 1930's and which has held a trademark registration for "Robin" (Batman's sidekick) for action figures and for comic books for years now. This seems like a bit of a stretch for DC Comics to win this one, as I'm not sure that the average consumer, if he saw an online magazine named "Robyn," would think there is a connection or association with Batman and DC Comics.

Body Shape: Types of Body Shapes, Dress for Body Shape, What Is My Body Shape? & More - Channel4 - 4Beauty Parental Control HistoryCloseSign in to get the most from 4oD History View your own personal 4oD history, useful if you share a computerKeep track of the last 50 shows you watched or started watchingResume unfinished shows from the point you stopped watching FavouritesCloseStart using Favourites today Look out for the add to Favourites button as you browse the siteUse the buttons to create a list of all your favourite showsNew 4oD episodes are flagged here so you don't miss out From the latest catch up to over 5000 hours of classic archive shows. All shows in the Lifestyle category Back to category list There is already a Channel 4 account registered to {| current_emailAddress |} {| merge_radio |} Sign in Sign in with your Channel 4 account {* #tradAuthenticateMergeForm *} {* signIn_emailAddress *} {* mergeSignIn_password *} {* signIn_signInButton *} {* /tradAuthenticateMergeForm *} We can be internet friends! To sign in wiith your Facebook account you need to register with 4 Keep me posted

Filipino Designers: Ezra Santos at Fashion Forward Dubai 2015 Filipino Designers: Ezra Santos at Fashion Forward Dubai 2015 (Illustrado) Fashion Forward Dubai 10th April 2015 Leading international Filipino couture designer Ezra Santos wows the Dubai fashion crowd with another beautiful homage to the Philippines – re-imagining the elegance of 1930s Manila. Filipino Designers: Ezra Santos at Fashion Forward Dubai 2015 Butter | A blog of baked goods - StumbleUpon A Caitlyn Jenner Halloween costume is coming Halloween is a controversial holiday that invites some divisive dress-ups. Many seize the opportunity to shock, see outfits like a Boston Marathon victim, a “psycho” mental health patient or a paedophile as examples of "characters" that people like to play while they’re trick or treating. This year, one of the biggest Halloween retailers in the US, Spirit Halloween, has confirmed the company will be selling Caitlyn Jenner costumes at its pop-up shops this year. Spirit Halloween is defending the move by saying that the costume is pro-Caitlyn. “Caitlyn Jenner has proven to be the most important real-life superhero of the year, and Spirit Halloween is proud to carry the costume that celebrates her,” Spirit Halloween PR and marketing head, Trisha Lombardo told Daily News. However, news that the image of the most visible transgender celebrity in the world is being made into a mass produced joke costume for a traditionally grim and gory holiday has led to criticism.

Earl grey hot chocolate & Cooking Blog - Find the best recipes, cooking and food tips at Our Kitchen. 14th September 2010By EmmaPhotography by Emma This hot chocolate recipe is inspired by a short stint working as a larder chef almost 10 years ago. I had never before had a hot chocolate as decadent as that which we served, and come to think of it, I don’t think I have ever had one as decadent since. Suffice to say that my version is not as indulgent, but I think that the addition of the earl grey tea makes it just as good! Serves 2 -- 1 ½ cups milk 1 ½ tsp earl grey tea 6 square of dark chocolate, or to taste -- 1.