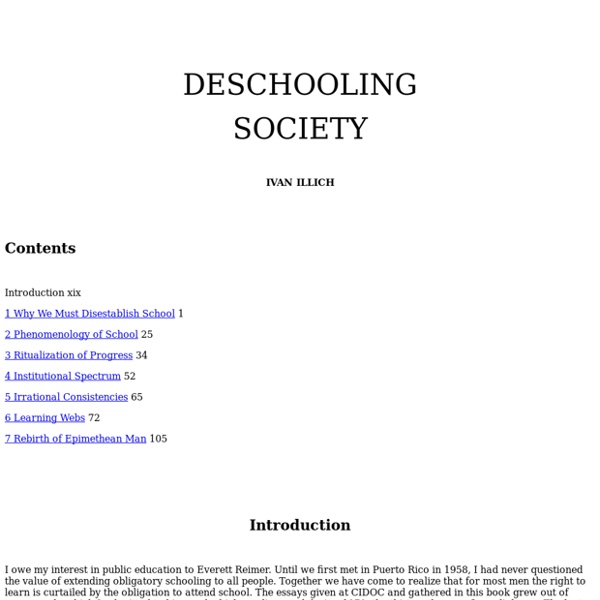 Contents Introduction xix 1 Why We Must Disestablish School 1 2 Phenomenology of School 25 3 Ritualization of Progress 34 4 Institutional Spectrum 52 5 Irrational Consistencies 65 6 Learning Webs 72 7 Rebirth of Epimethean Man 105 Introduction I owe my interest in public education to Everett Reimer. Since 1967 Reimer and I have met regularly at the Center for Intercultural Documentation (CIDOC) in Cuernavaca, Mexico. Universal education through schooling is not feasible. xx DESCHOOLING SOCIETY and caring. On Wednesday mornings, during the spring and summer of 1970, I submitted the various parts of this book to the participants in our CIDOC programs in Cuernavaca. Reimer and I have decided to publish separate views of our joint research. Cuernavaca, Mexico November, 1970

Achievement First Endeavor Middle School With a little paint and some bold typography, a school designed to change the life of its students has undergone a transformation of its own. For the Achievement First Endeavor Middle School, a charter school for grades 5 through 8 in Clinton Hill, Brooklyn, Paula Scher has created a program of environmental graphics that help the school interiors become a vibrant space for learning. The project was completed in collaboration with Rogers Marvel Architects, who designed the school as a refurbishment and expansion of an existing building. Achievement First is a network of public charter schools in Brooklyn and Connecticut. With the support of the Robin Hood Foundation, Achievement First seeks to provide students in urban areas with an education that will put them on the path to college. Endeavor Middle School has a student body of about 300 and is ranked number four in the best K to eight schools in New York City. The graphics can be seen through windows in the school facade.

47 Mind-Blowing Psychological Facts You Should Know About Yourself I’ve decided to start a series called 100 Things You Should Know about People. As in: 100 things you should know if you are going to design an effective and persuasive website, web application or software application. Or maybe just 100 things that everyone should know about humans! The order that I’ll present these 100 things is going to be pretty random. Dr. <div class="slide-intro-bottom"><a href=" AT&T, Feds Neglect Low-Price Mandate Designed to Help Schools A decade after the program started, AT&T was still not training its employees about the mandatory low rates, which are supposed to be set at the lowest price offered to comparable customers. Lawsuits and other legal actions in Indiana, Wisconsin, Michigan and New York have turned up evidence that AT&T and Verizon charged local school districts much higher rates than it gave to similar customers or more than what the program allowed. AT&T has charged some schools up to 325 percent more than it charged others in the same region for essentially the same services. Verizon charged a New York school district more than twice as much as it charged government and other school customers in that state. The companies say they comply with the rules of the program, known as E-Rate. Meanwhile, the federal government has made scant effort to enforce the requirement that companies give the preferential rate to schools. Sift through that pile of papers at home and take a look at your monthly bill.

Dogs Play Key Role in Life at Some Private Schools Poly Prep Country Day SchoolAwaiting orders: Fenway, the headmaster’s dog, at Poly Prep Country Day School in Bay Ridge, Brooklyn. Dr. Evil had his cat, Mr. Bigglesworth; President Obama has Bo; even Jabba the Hut had an interstellar critter named Salacious Crumb. “Animals have an interesting ability to humanize the people that they are around,” said Robert Lauder, the head of Friends Seminary in the East Village. Bart Baldwin, the headmaster of the St. Not every dog is suited for school mascot status, though, said Liz Palika, a dog trainer and behaviorist and co-author of “Dogs at Work: A Practical Guide to Creating Dog-Friendly Workplaces.” Trolley, a 125-pound bull mastiff owned by David B. Now students come to his offices at the school’s Bay Ridge and Park Slope campuses begging for the privilege of walking Fenway, the affable 5-year-old Labrador retriever who assumed Trolley’s role. Save for service dogs, you won’t find a personal pet in any New York City public school.

Education Revolution | Alternative Education Resource Organization Amelia Marzec: Education and Activism in Alternative Schools In an Occupy-saturated New York, there's a push for education by the people for the people that calls for new structures of collaboration and new uses of resources. But two organizations, The Public School and Trade School, were in play well before the first tent ever popped up in Liberty Square. Designed by artists and organized without curriculums, classes range from philosophy and time travel to mushroom hunting and stilt walking. They won't be churning out bridge-building engineers, but illustrate a dream of collective education. Both schools have similar structures. They have websites where classes can be proposed by the general public and then approved, and they hold classes wherever they get space, often in public locations (Trade School is currently seeking a storefront space). My first class was "The Technology of Dissent" at The Public School New York. Which brings us to the point of The Public School: anyone can teach, or be on the committee.