100 Ways for Your Family to Make a Difference 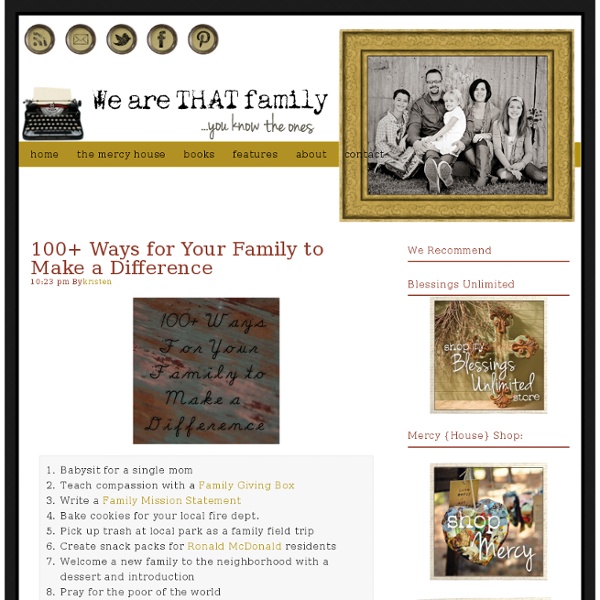 How to Make Google Translate Beatbox Not sure if this falls in the category of Easter Egg or clever manipulation, but either way, there go our afternoons: Redditor harrichr has devised a scheme for turning Google Translate into a makeshift beatbox machine. 1) Go to [1] Google Translate2) Set the translator to translate German to German3) Copy + paste the following into the translate box: pv zk pv pv zk pv zk kz zk pv pv pv zk pv zk zk pzk pzk pvzkpkzvpvzk kkkkkk bsch4) Click “listen”5) Be amazed :) For the lazy, just click this link and it’ll be done for you. There’s nothing magical about this particular sequence, and there’s tons of room for experimentation: In German, anyway, “pv” and “zk” make complementary breathy sounds and clicks, respectively. Spaces add pauses.

How to Make Clothing Buttons from Shrink Plastic&8230; This tutorial is an old one of mine that’s too good not to share again. Since posting the first time, I’ve had lots of questions about these buttons which will hopefully be answered in this revised post. Equipment Some handy notes: 1. The buttons. 100 Ways to Serve Others I’ve continued to be inspired by people’s 100 lists and you’ve probably seen many that I’ve highlighted in recent resource lists. Dragos wrote one that triggered me to write another with his excellent post on 100 tips to write huge lists. This list is on my favorite subject and while the length of these lists makes them quite a challenge to make, this particular subject is one I’ve spent a lot of time thinking about and writing goals in so its a great topic for me to tackle in a list.

99 Resources to Research & Mine the Invisible Web College researchers often need more than Google and Wikipedia to get the job done. To find what you're looking for, it may be necessary to tap into the invisible web, the sites that don't get indexed by broad search engines. The following resources were designed to help you do just that, offering specialized search engines, directories, and more places to find the complex and obscure. Search Engines Quotes from Starbucks - Influential Mom Blogger, Parenting, Community 10K Amazing Shares Facebook 3 Pin It Share 7 7 Twitter 0 Google+ 12 StumbleUpon 10K Email -- Email to a friend 10K Amazing Shares × Wisdom from a cup of coffee…..

Paper Crafts : - StumbleUpon Description: So stylish, cheap and easy! Craft Link: Pretty Paper Flowers Read More: Paper Crafts or Home Description: Create cus­tom art­work for next to noth­ing with this very clear tut­or­ial. Life Check: What Are Your Life Patterns? Recently I watched a video of Ray Kurzweil’s presentation on TED where he explained the exponential growth of technology. The number of transistors in a chip, for instance, increases exponentially over time. As a result, projects like Human Genome Project took much less time to complete than the initial expectation. There is a statement in the video that interests me. Kurzweil said that while a single technological event seems chaotic, as a whole those events reveal a clear pattern.

Anatomy of a Stud-Framed Wall Jack studs and king studs The header is supported by a jack stud at each end. Jacks, sometimes called trimmers, fit under each end of a header, and they transfer the load that the header carries down to the bottom plate and the framing beneath. Nailed to the jacks are full-height studs called king studs; they support the assembly between the plates.