History and Current Issues for the Classroom 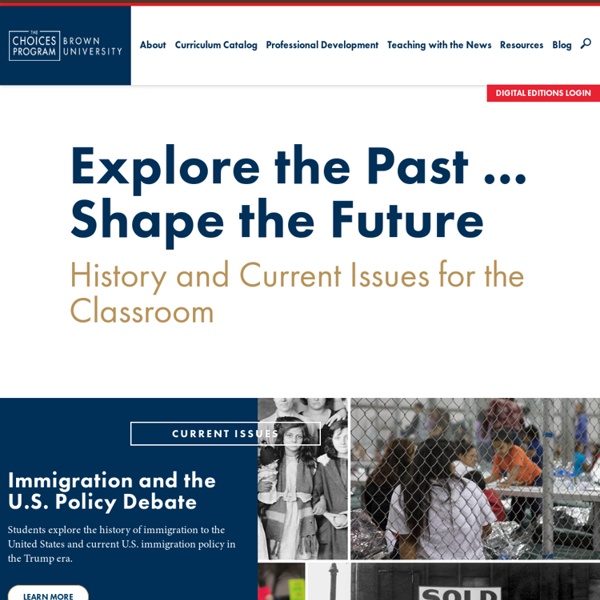 Related:  ckregel631 • US Gov and Politics

World War II General Resources WWII Web Sites Encyclopedia of the Second World War The Second World War is a Spartacus Educational website and enables one to research individual people and events of the war in detail. The sources are “hypertexted” so that the visitor can research the newspaper, organization, etc., that produced the source. There are several subsections including those on: Background to the War; Nazi Germany, Chronology of the War, Political Leaders, European Diplomacy, Major Offensives, British Military Leaders, USA Military Leaders, German Military Leaders, Japanese Military Leaders, The Armed Forces, The Air War, The Resistance, Scientists & Inventors, War at Sea, Resistance in Nazi Germany, The Holocaust, War Artists, Weapons and New Technology. HyperWar: World War II Hyper War is a “hypertext” history of the second World War and features diplomatic and political documents. World War II Sites This site serves as a gateway to World War II sites appropriate for students and teachers. U.S.

The Story of Stuff The Story of Stuff, originally released in December 2007, is a 20-minute, fast-paced, fact-filled look at the underside of our production and consumption patterns. The Story of Stuff exposes the connections between a huge number of environmental and social issues, and calls us together to create a more sustainable and just world. It’ll teach you something, it’ll make you laugh, and it just may change the way you look at all the Stuff in your life forever. Download the Fact Sheet Credits The Story of Stuff was written by Annie Leonard, Louis Fox, and Jonah Sachs, directed by Louis Fox and produced by Free Range Studios. Show full list of credits

Photos Of School Lunches From Around The World Will Make American Kids Want To Study Abroad More than one-third of kids in America are obese or overweight. In 2013, the National School Lunch Program, a federally assisted meal program operating in public and nonprofit private schools, served 5.1 billion lunches, Bloomberg reports. The quality of these lunches must somehow correlate to the health of America's youth, considering more than 32 million children are served NSLP every day. Parents could model better eating habits and stock their crispers with fresh fruit and vegetables, but a viable starter solution might begin at lunchtime. Sweetgreen, a healthy quick-serve restaurant that values local and organic ingredients, clarified disparity between American student lunches and those of other countries by photographing typical school lunches from around the world. The visuals are eye-opening. The U.S. government acknowledges that our nation's children should not go hungry, but there's less of an emphasis on what exactly our children are being fed. Brazil Italy Finland South Korea

Climate Change and Global Warming Introduction On this page: What is Global Warming and Climate Change? Global warming and climate change refer to an increase in average global temperatures. Natural events and human activities are believed to be contributing to an increase in average global temperatures. A warming planet thus leads to a change in climate which can affect weather in various ways, as discussed further below. What are the main indicators of Climate Change? As explained by the US agency, the National Oceanic and Atmospheric Administration (NOAA), there are 7 indicators that would be expected to increase in a warming world (and they are), and 3 indicators would be expected to decrease (and they are): What is the Greenhouse Effect? The term greenhouse is used in conjunction with the phenomenon known as the greenhouse effect. The Greenhouse effect is natural. Many of these greenhouse gases are actually life-enabling, for without them, heat would escape back into space and the Earth’s average temperature would be a lot colder. D.

Edutopia Elections: Digital Resources for Educators This election has been unlike any in modern history. According to a survey of educators by Teaching Tolerance, the campaign’s contentious tone has spilled over into classrooms. Presidential elections are exciting for students and provide an opportunity to discuss and debate a range of issues in the classroom. But this year, that excitement is more likely to turn into conflict. Setting ground rules and promoting civility in debates can help students avoid conflicts and encourage fruitful debates. Once you've covered these basics, students will be better equipped to explore, discuss, and debate the issues. Election 2016: Lesson Plans, Resources, and Primary Sources Election Central From PBS LearningMedia: This collection features a little bit of everything: election news, history, and ideas for facilitating classroom debates. C-SPAN Road to the White House: If you're looking for video clips of the candidates, this is your source. Additional Election and Political Classroom Resources

Compromise of 1850: Primary Documents of American History (Virtual Programs & Services, Library of Congress) The Compromise of 1850 consists of five laws passed in September of 1850 that dealt with the issue of slavery. In 1849 California requested permission to enter the Union as a free state, potentially upsetting the balance between the free and slave states in the U.S. Senate. Senator Henry Clay introduced a series of resolutions on January 29, 1850, in an attempt to seek a compromise and avert a crisis between North and South. Library of Congress Web Site | External Web Sites | Selected Bibliography A Century of Lawmaking for a New Nation This collection contains congressional publications from 1774 to 1875, including debates, bills, laws, and journals. Words and Deeds in American History In honor of the Manuscript Division's centennial, its staff has selected for online display approximately ninety representative documents spanning from the fifteenth century to the mid-twentieth century. Jump Back in Time: John C. American Treasures of the Library of Congress - Compromise of 1850

The Library of Congress University of Wisc: Center for the Study of the American Constitution LPs We have provided some suggestions on how to use various parts of our website. Most are based in the documents found within the Ratification, Confederation, and Founders Pages. Since many state standards of instruction emphasize the use of primary sources, all of our suggestions are focused on using and interpreting documents. It should be noted that these are merely suggestions and that some modification may be warranted based on grade level and other classroom considerations. A Series of Lesson Plan Books Published by the CSAC The Creation and Ratification of the Constitution (pdf) Part I. Scripted Conversations: The Federalist and Antifederalists Debate the Constitution (pdf) Scripted Conversations: The Supreme Court on Executive Power (pdf) Lesson Plans Using Materials on the CSAC Website Lesson Plans by CSAC Fellows Lessons Relating to the Confederation Period Lessons Relating to the Philadelphia Convention Lessons Relating to the Ratification of the Constitution

The website “Choices” will be a good primary source because students will be able to view past events and then compare those events with current events happening today. This will allow the students to relate what has happened in the past to what is happening in the present time. Many times students may not feel that what has happened in the past is important, but when students can see the same type of things are still happening today then connections to history become relevant to students. by teresa8sant Jul 31