What is Slow Fashion? 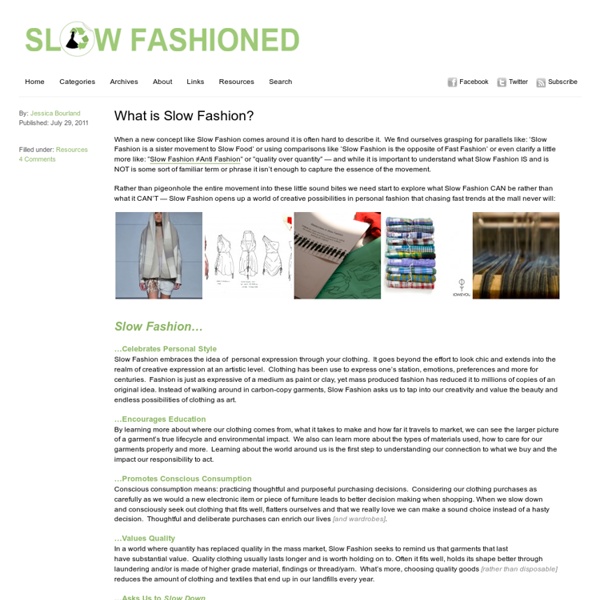 When a new concept like Slow Fashion comes around it is often hard to describe it. We find ourselves grasping for parallels like: ‘Slow Fashion is a sister movement to Slow Food’ or using comparisons like ‘Slow Fashion is the opposite of Fast Fashion’ or even clarify a little more like: “Slow Fashion ≠Anti Fashion” or “quality over quantity” — and while it is important to understand what Slow Fashion IS and is NOT is some sort of familiar term or phrase it isn’t enough to capture the essence of the movement. Rather than pigeonhole the entire movement into these little sound bites we need start to explore what Slow Fashion CAN be rather than what it CAN’T — Slow Fashion opens up a world of creative possibilities in personal fashion that chasing fast trends at the mall never will: Slow Fashion… …Celebrates Personal Style Slow Fashion embraces the idea of personal expression through your clothing. Related articles:

Debating Style, Courtesy of Jeremy Scott and Carolina Herrera Photo Is Jeremy Scott the Donald Trump of American fashion? Not in terms of politics — definitely not in terms of politics — but in terms of positioning? Mr. His success is impossible to ignore, whether or not you liked the extended riff on bouffants, the B-52s, ’60s mod and cartoon caricatures he offered in pastel shades of patent, cotton knit and silk. Continue reading the main story Slide Show At the very least, it has exposed the extent to which many designers like to play it safe, and stick to the familiar party line. , for example, created his usual elaborate set — this time, an entire Caribbean lagoon complete with water, tiki bar and palm tree — for a show of peppy but entirely unoriginal striped crochets, flower-child patchwork prints and silk bombers. Continue reading the main story Slide Show This isn’t necessarily bad: There are plenty of women whose comfort zone is consistency. As was the subtle way Mr. Continue reading the main story Slide Show Photo As was the subtle way Mr.

London Fashion Week 2015: From catwalk to High Street 24 February 2015Last updated at 19:03 ET By Harriet Hall BBC News Inside London Fashion Week Twice a year, London's grand neoclassical Somerset House, welcomes a tumult of fashion designers and their models dressed in their finest gladrags. The courtyard becomes the centre of London Fashion Week - a far cry from the building's sober past as home to the Inland Revenue. This year sees the event's 61st year, during which more than 250 designers will showcase their collections for autumn and winter to a global audience. For those outside the fashion industry, it can be difficult to appreciate why this week is so important. Indeed, watching the crowds teetering on vertiginous heels, heads topped with designer sunglasses, arms toting handbags and hands clutching smartphones, it is easy to understand why. Yet while it may look like a big party to outsiders, the week is a crucial one for the industry. Some catwalk fashions may seem outlandish or frivolous.... Trickle-down trends “Start Quote

Japan's women's magazines ramp up focus on politics amid widespread concern over Abe's security reforms Public anxiety over the security legislation is in the streets — and in print. Even women’s fashion magazines have discussed the topic alongside recipes and hemlines, in a measure of how deeply aware the public is of the changes afoot. An edition of Shukan Josei (Women’s Weekly) published on Sept. 8 focused on women who took part in a massive rally outside the Diet on Aug. 30 in protest at the security bills. “Dear Prime Minister Abe, Do you know why we are angry?” The article ended declaring: “We don’t need a prime minister who doesn’t understand how women feel.” In its July 14 edition, the same magazine carried a major 10-page feature about the security bills, including an interview with Seiichiro Murakami, a Liberal Democratic Party lawmaker who opposes the legislation. “We were surprised by the large number of responses on Twitter and on the Internet,” said Bunichi Terada, the magazine’s editor-in-chief. “They have no interest in splits within political parties,” he said.

Is Fashion a Credible Platform for Protest? | Opinion, BoF Comment Vivienne Westwood Red Label Spring/Summer 2015, Jean Paul Gaultier Spring/Summer 2015, Stella McCartney | Photo Collage: BoF LONDON, United Kingdom — Last week in Paris, Chanel appropriated the visual signifiers of feminist protest for its seasonal runway show. In a finale led by Karl Lagerfeld, a bevy of supermodels took to a catwalk christened “Boulevard Chanel” holding signs with slogans such as “History is Her Story,” “Make Fashion Not War,” and “Tweed Is Better Than Tweet.” On the same day in Hong Kong, a genuine protest was underway. Playing out against this backdrop, the “faux-test” staged on Boulevard Chanel rang especially hollow, repackaging political riot as a light-hearted, Instagram-savvy performance. We think it can. Over the course of a career spanning more than three decades, Jean Paul Gaultier has used the fashion show format to address the socially and politially charged issues of female empowerment and beauty.

Can Feminists Like Fashion? - Forbes Céline 2012 Runway Feminism and fashion have always had a rocky relationship, a point hammered home in an article in Ms. magazine’s January issue, “If The Clothes Fit: A Feminist Take On Fashion.” The piece explores the tumultuous role that fashion has historically played in gender politics—both serving as a medium for the advancement of women, and as a weapon of restraint. It’s hard to deny the key role that fashion has played in the women’s movement. That being said, feminist notions that fashion can be destructive, certainly didn’t come from thin air. Fortunately, fashion in recent years does appear to be moving in a feminist direction. Still that damned if you do, damned if you don’t attitude persists in regards to women and fashion. On the other side of the spectrum, women who choose to ignore fashion trends are deemed slovenly and out of touch.

Topshop Gets Called Out For Unrealistic Mannequin Body Standards By now, it seems as if most retailers have been involved in some sort of controversy. And while some have been because of tasteless graphics, or hypersexualized advertisements, one thing we continue to see over and over again—and frankly, we're tired of it—is the ridiculous body standards reinforced by the mannequins that model the clothing. Topshop, the popular British brand that boasts collaborations with stars like Gigi Hadid and Cara Delevingne, has come under fire after a shopper noticed that the store's mannequin had extremely thin legs. The mannequin was wearing the retailer's popular "Jamie" jeans, and the shopper, Laura Berry, voiced her concerns that the figure was not an accurate representation of the average female form. "Perhaps it's about time you became responsible for the impression you have on women and young girls and helped them feel good about themselves rather than impose these ridiculous standards," Berry wrote in a post on Topshop's Facebook page.

Chanel's Feminist Protest Was Best Thing About Fashion Week Girl power! Chanel had some memorable finales including the time pregnant model Ashleigh Goode closed the haute couture show show wearing a wedding gown. For the finale of their Spring/Summer 2015 at Paris Fashion Week, Karl Lagerfeld accompanied models in a feminism protest. The clothes didn’t feature any feminism messages or obvious themes, but there were a series of bright, bold florals that went well with the show’s bold and empowering finale. It’s great that Chanel closed the show with such a strong feminist message. Click here, for more fashion week coverage. (Photos: Pascal Le Segretain/Getty Images, Instagram/Cindi_Leive)

Political Movements in Fashion Can fashion have a political conscience? The question is a recurring one, and the answers are all too often clichéd. Examples of the industry’s insensitivity and lack of sympathy (or knowledge) towards social and political realities surface regularly in the media, and stories about blackface editorials and articles praising the “beauty” and “philanthropy” of the wives of Middle East dictators make the movie Zoolander look like a realistic take on the fashion world. However (and contrary to popular belief) fashion is just as often used as a social commentary. When, in 1906, Paul Poiret freed women from the corset, the couturier was immediately hailed as a pioneer of the Women’s Liberation Movement. "In an ultra-connected world where news goes instantly global thanks to the Internet, it has become impossible for designers to ignore their political conscience" “I’m not politically outspoken but I make statements regularly in my work” — Pam Hogg But do any of these questions have an answer?

Dress codes: can there be a productive relationship between politics and fashion? Is Margaret Atwood a feminist? That’s what I’m trying to work out during our lamentably brief time together squished around a table in the back of a promotional booth at a comics convention in California. Obviously, you might roll your eyes, Have you read The Handmaid’s Tale? Certainly among fourth wave feminists, many of whom, in the UK at least, studied the book as part of the National Curriculum at A-level, Atwood is lionised, especially on Twitter, where she enthusiastically interacts with her 1.27 million followers on a regular basis. But what many of them forget is that Atwood, who is now 76, grew up on the cusp between first and second wave feminism, a time when women were fighting for tangible goals such control over their reproductive rights rather than the right to publish nude selfies without criticism. “I, as a female person, don’t have any trouble reading Moby Dick. “Wonder Woman was read by everybody,” she continues. Angel Catbird is out in the UK on 8 September.