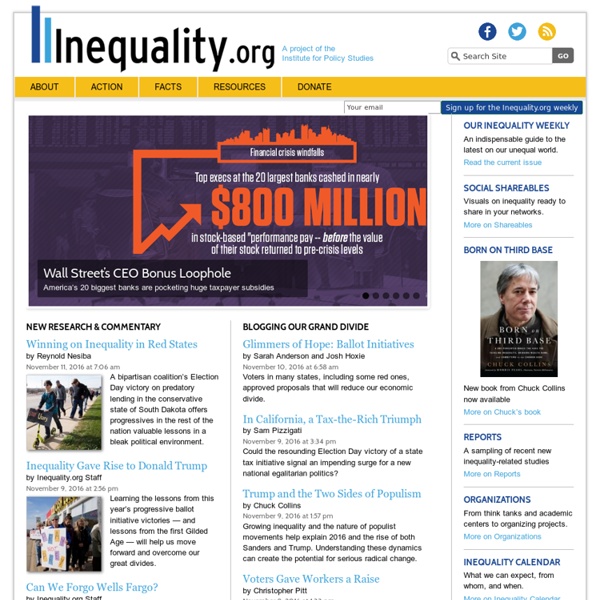 Study: Income Inequality Kills Economic Growth Corporate chieftains often claim that fixing the US economy requires signing new free trade deals, lowering government debt, and attracting lots of foreign investment. But a major new study has found that those things matter less than an economic driver that CEOs hate talking about: equality. "Countries where income was more equally distributed tended to have longer growth spells," says economist Andrew Berg, whose study appears in the current issue of Finance & Development, the quarterly magazine of the International Monetary Fund. Comparing six major economic variables across the world's economies, Berg found that equality of incomes was the most important factor in preventing a major downturn. (See top chart.) In their study, Berg and coauthor Jonathan Ostry were less interested in looking at how to spark economic growth than how to sustain it. So how important is equality? Berg and Ostry aren't the first economists to suggest that income inequality can torpedo the economy.

The Fight Over Inequality The headline promised an article of critical importance: “Obama’s inequality argument just utterly collapsed.” James Pethokoukis, a conservative columnist and blogger at the American Enterprise Institute, wrote on April 11 that a new academic study put the lie to Democratic claims of endemic inequality and grotesquely distorted income gains by the top 1 percent. The “tax and regulatory policies of the past three decades,” he wrote, did not lead to stagnation for the middle class at the hands of the rapacious rich. Claims to the contrary — such as those made by Obama, the Occupy movement, and many liberal economists — never really passed the sniff test of anyone who lived through the past few decades. Pethokoukis’s claim is based on the findings of three scholars: Richard V. Pethokoukis is a hard-core adversary of the current administration. The continuing debate over social mobility and income distribution does not lend itself to facile conclusions. Congressional Budget Office Thomas B.

Films For Action | Watch Over 1000 Free Videos Hand-Picked to Change the World Lawyers, Guns & Money OpenPolitics Wealth doesn't trickle down – it just floods offshore, research reveals | Business | The Observer The world's super-rich have taken advantage of lax tax rules to siphon off at least $21 trillion, and possibly as much as $32tn, from their home countries and hide it abroad – a sum larger than the entire American economy. James Henry, a former chief economist at consultancy McKinsey and an expert on tax havens, has conducted groundbreaking new research for the Tax Justice Network campaign group – sifting through data from the Bank for International Settlements (BIS), the International Monetary Fund (IMF) and private sector analysts to construct an alarming picture that shows capital flooding out of countries across the world and disappearing into the cracks in the financial system. Comedian Jimmy Carr became the public face of tax-dodging in the UK earlier this year when it emerged that he had made use of a Cayman Islands-based trust to slash his income tax bill. "These estimates reveal a staggering failure," says John Christensen of the Tax Justice Network.