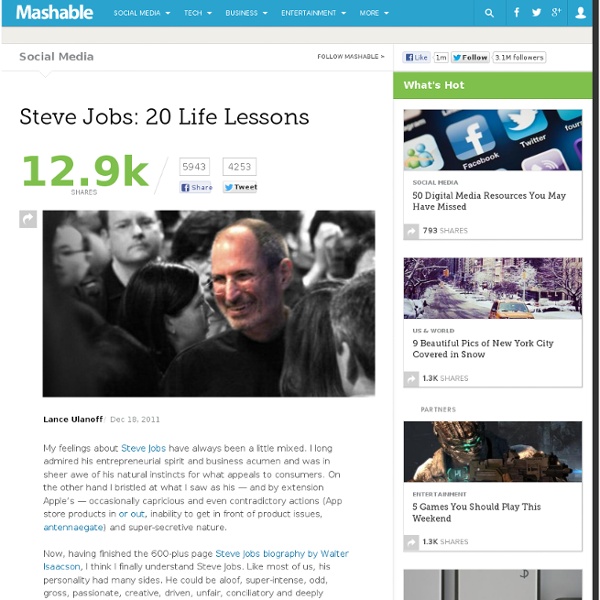 My feelings about Steve Jobs have always been a little mixed. I long admired his entrepreneurial spirit and business acumen and was in sheer awe of his natural instincts for what appeals to consumers. On the other hand I bristled at what I saw as his — and by extension Apple’s — occasionally capricious and even contradictory actions (App store products in or out, inability to get in front of product issues, antennaegate) and super-secretive nature. Now, having finished the 600-plus page Steve Jobs biography by Walter Isaacson, I think I finally understand Steve Jobs. Like most of us, his personality had many sides. As I read the tome on my Kindle, I highlighted interesting, surprising and relevant passages. Don’t Wait When the young Steve Jobs wanted to build something and needed a piece of equipment, he went straight to the source. Make Your Own Reality “I didn’t want to be a father, so I wasn’t,” Jobs later said, with only a touch of remorse in his voice. Control Everything You Can

Startup entrepreneurs are ‘arrogant and psychopathic’ The startup economy is well-known for lauding the most successful young entrepreneurs, those twenty-somethings who are turned into millionaires — or even billionaires — through their exploits. Yet there are also plenty of stories about the bad behavior and kill-or-be-killed attitudes that often emerge inside startups. That’s no coincidence, say a pair of German academics. In an interview in Germany’s Der Spiegel, Dominik Schwarzinger and Matthias Kramer, who are researching the entrepreneurial personality, say that borderline personality disorders can actually be crucial elements behind startup success. As part of a study that has been underway since 2009, the duo suggest that there are several traits that may be highly unpleasant in ordinary life but can help startups succeed. In many ways, this is no revelation. The duo admit that in most cases, these are not full blown personality disorders (hence the “sub-clinical”) and merely trends.

What’s the worst thing that can happen? « Startup Marketing Lessons Learnt Matthieu Ricard - Happiest man in the world You have been there too, in a similar situation, I am sure. For me, there is this startup I am running called Buffer. What used to happen, is that I would think the world collapses. What I found is, we keep thinking about that terrible situation, but we don’t think about that big thing in our head and why it is even there. A quote I found most accurate is this one: Worrying is interest paid on a debt that you might never owe. Whilst we keep worrying about the situation, that big thing in our heads is possibly something completely unnecessary. “Joel’s exercise” to battle tough situations The one thing that helped me the most is something I have started to call “Joel’s exercise”. Joel would in every case keep a calm mind and just say:”Let’s think about it, what’s the worst thing that can happen?” Happiness is a skill, not a state “Happiness – in essence, is not a state, but a skill to be learned.” So yes, we have to practice being happy.

How Israel turned itself into a high-tech hub 22 November 2011Last updated at 00:12 By Katia Moskvitch Technology reporter, BBC News, Tel Aviv WATCH: How did Israel establish itself as a fertile ground for hi-tech start-up companies? When a grey-haired grandmother clutching a smartphone mounted the stage at Montreal's Start-up Festival this summer, young Israeli entrepreneur Guy Rosen knew he had pocketed a very special award. His company, Tel Aviv-based Onavo, offers an application that shrinks mobile phone data to help users save money - and appeals to any age. Standing in his office in Tel Aviv, Mr Rosen recalls the moment: "They went on stage and said: 'We love Onavo and we understand what it does... it is such an easy app to understand' - we just save money, that's it, period, they loved us." Guy Rosen is one of Israel's many young, enthusiastic entrepreneurs who, fresh out of the army, decided to set up a tech firm. Formula for success In 2010 alone the flow of venture capital amounted to $884m (£558m). Government's role Lost decade

Generation Y Is Born To Startup Every generation rebels against their parents. When parents approve, their offspring disapproves. Parent says black, adolescent teen says white. Psychologists who are expert in these matters explain that rebellion is a factor in establishing identity. It’s part of the journey of growing up -- personalities are taking shape and a sense of self is being nurtured. Even if you haven’t quite worked out what you want, it helps to know what you don’t want. But the times seem to be a-changing, yet again. Our conventional views of rebellion have been summed up in iconic images: think Marlon Brando wearing a leather jacket astride a Triumph Thunderbird motorcycle in 'The Wild Ones.' A quick visit to Facebook will show you just how many teens have begun selling products on their pages. Every day I’m contacted by at least 100 kids asking for advice on starting their own businesses. You have nothing to lose You have no mortgage, you have no husband or wife to support.

Interview: David Karp, founder of Tumblr, on realising his dream | Media David Karp, the founder of the blogging platform Tumblr, was 17 when he decided to cut the apron strings and move to Tokyo. With a smattering of Japanese and a sharp eye for computer code, the impatient Manhattan teenager embarked on a period of self-discovery. "I was holed up in the middle of this world where it was just me on the internet," Karp recalls. Within weeks, he had fine-tuned his computer skills and cooled on the idea of building robots. He wanted to be an entrepreneur. But there was one small problem: his voice. "I was so silly – I tried to be very formal and put on a deep voice to clients over the phone so I didn't have to meet them and give away how young I was," he says. Karp returned to the US with a fistful of contracts (drawn up by his father) and a list of executives' ears to bend. Now 25, Karp is at the helm of one of the internet's fastest growing startups. It was time for Karp and Tumblr to grow up. But Karp is unconvinced.

You Have to Jump First Startups are founded by people that make the leap before anyone else. If you don’t leap first, you don’t stand a chance of winning. Jump. No one else can jump for you or before you. Julien Smith gets right to the point in his post about making things happen. You can’t go to an investor and say, “I’m going to leave my job, just as soon as I get funding. Bullshit. You have to jump first. Every so often someone asks me, “What are you looking for in an entrepreneur?” You can’t expect investors, business partners, employees or anyone else — even a co-founder — to take a leap of faith with you if you’re not willing to do so first. You have to jump first. Jump.

Making money with a product: a myth? I’ve realised there was a time I didn’t believe people would pay for a product. In my mind, it was a myth. As an entrepreneur, it’s so vital to overcome that. First, a coffee shop conversation I was chatting with my friend Joss in a coffee shop recently, and he told me about his new project, Open Exchange Rates, which is gaining a surprising amount of traction. He’s a great hacker and he’s done countless side projects and many open source collaborations, and he’s had great success with many of them. From traction to a mini brainwave The traction with the recent project got him thinking, though. Thinking more about paying for products What he shared with me next in our coffee shop conversation was very interesting. A familiar feeling The most interesting part for me about the whole conversation, however, was that I suddenly realised that I had this exact same feeling just before I had the idea for Buffer almost two years ago. Why does it feel like a myth? $10 seems like a lot of money.